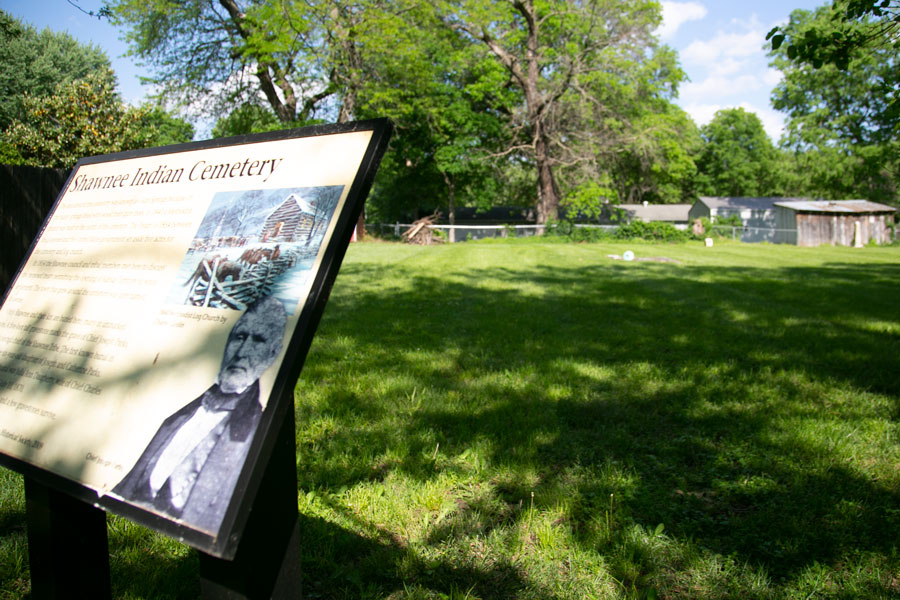 The Shawnee Tribe of Oklahoma once again owns the cemetery above, located in the city of Shawnee, after Gov. Laura Kelly signed a bill into law obligating the state to cede back the land. Photo credit Juliana Garcia.

The Shawnee Tribe of Oklahoma now owns a historic half-acre cemetery off Nieman Road and W. 59th Terrace in Shawnee.

Why now? Earlier this week, Kansas Gov. Laura Kelly signed SB 405, which obligates the Kansas State Historical Society, which had previously owned and operated the cemetery, to give the small plot of land back to the tribe.

Why it matters: Chief Ben Barnes called it a “significant day” for the tribe’s efforts to tell a fuller truth of their history in what is now Johnson County.

Barnes told the Post that regaining ownership of the cemetery acknowledges it as a sacred place for the Shawnee people. It also formally recognizes the tribe members buried there — including the tribe’s first-ever elected chief — as Shawnee tribal citizens.

Additionally, it will also allow the tribe to look for unmarked graves at the site without dealing with a separate property owner. The tribe will still obey all Kansas laws in that effort, though, Barnes said.

Key quote: “I think for me, and I’m sure the rest of the small number of council people from our nation there, this was a momentous event,” Barnes said. “To at least have an acknowledgement that these people in the cemetery are Shawnee citizens, even though they are deceased, and that this parcel is a sacred place for our Shawnee people, and that it’s only right that this is what’s done.”

Bigger picture: The ownership change comes as Barnes and the Shawnee Tribe amplify their efforts to find unmarked Native American graves on the 2,000 acres of land that once housed the Shawnee Indian Manual Labor School — which is now centered around the 12-acre Shawnee Indian Mission site in present-day Fairway.

The tribe and the city of Fairway announced a partnership related to these efforts in October, and Barnes continues to advocate for a deeper look into the history of Native American boarding schools in Kansas and nationwide.

Cemetery’s history: The cemetery in Shawnee was created by the Treaty of 1854, in which the Shawnee tribe agreed to cede their reservation lands in what is now northeast Kansas.

The cemetery, which has been referred to by the state as the Shawnee Indian Cemetery, is the resting place of the first elected Shawnee Tribe chief, Chief Joseph Parks, according to a plaque outside of the cemetery.

Originally, the government designated five acres of land for the cemetery and a log church built in 1840, according to the plaque.

Barnes said he does not know when exactly the state of Kansas took over ownership of the cemetery.

Barnes said “Shawnee Indian Cemetery” is not an accurate name for the cemetery because, at one point, there were several Shawnee tribe cemeteries in the area. Few of these cemeteries still stand today, he said.

It’s possible the tribe could rename the cemetery after some of the families buried there, including the Parkses, Silverheels and Bluejackets, Barnes said.

Still, the tribe doesn’t know if there are other families buried there, too.

What’s next: First, Barnes said, the tribe intends to conduct a survey of the cemetery, which can help determine if nearby fences are pushing up on potential graves.

Five headstones were damaged at the cemetery, and the tribe took three of those five to be repaired, Barnes said. Those headstones will be reinstalled.

Long-term, the tribe will discuss the future of the cemetery including marking potential graves or publicly marking the cemetery’s location, Barnes said.

Key quote: “We’ve done so much in this human rights arena, this desire to just tell a fuller truth about Shawnee people — and particularly about the Shawnee people as we relate to Kansas history,” Barnes said. “Today was a significant day for that.”