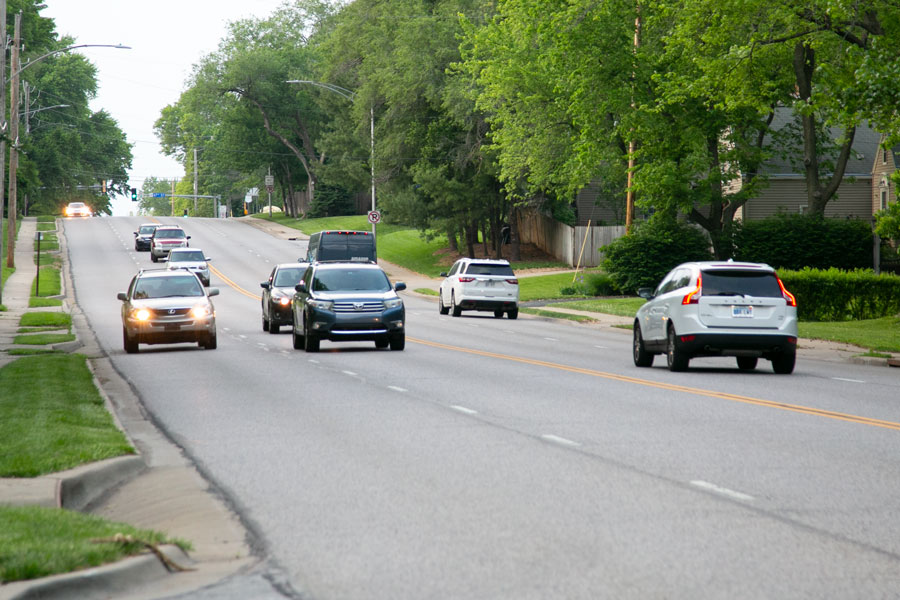 Prairie Village will consider a traffic study to determine whether a lane reduction on Nall Avenue from 67th to 75th Streets is appropriate. Above, Nall Avenue at 69th Street. Photo credit Juliana Garcia.

The city of Prairie Village could soon take a closer look at traffic patterns along a busy stretch of Nall Avenue with the aim of making the thoroughfare more bike and pedestrian friendly.

The bigger picture: The proposed study — an update to a similar traffic study conducted almost 10 years ago — would take a closer look at whether the city should reduce Nall from 67th to 75th streets from four lanes down to three.

The study is also in connection to the previously approved County Assistance Road System submission from the April 18 city council meeting.

As part of that city approval, Nall Avenue would undergo a $2.5 million renovation in 2023 from 67th to 75th Streets.

The traffic study itself would cost roughly $22,000 and be conducted by Kansas City-based engineering firm TranSystems.

The details: The traffic study, if approved, will look at the volume of cars and turning traffic, according to city documents.

Bike and pedestrian plans from the cities of Prairie Village and Overland Park also call for bike lanes to be included on that part of Nall.

What’s next: The council committee of the whole unanimously recommended the traffic study be approved by the city council. Councilmember Piper Reimer was absent.

This traffic study will appear on a future city council consent agenda for formal approval.

Key quote: “We’ve had preliminary conversations with Overland Park, and I think they generally agree in this location we won’t actually narrow the curbs,” Bredehoeft said in response to a question from Councilmember Ron Nelson about bike lane width. “We’ll actually have wider bike lanes on the outside … It’s actually going to be good, provide extra buffer to the sidewalks that are there and have wider bike lanes in that section.”