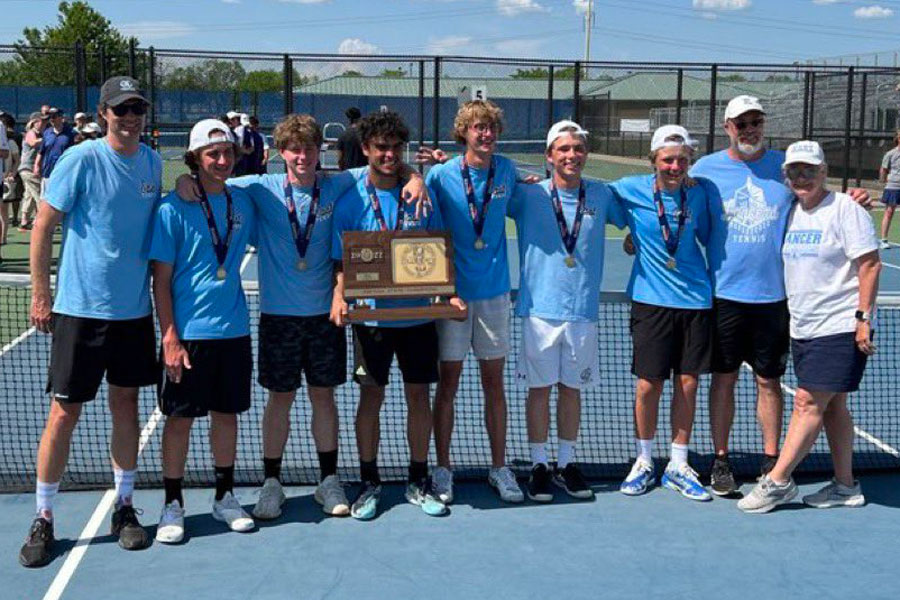 The victory: Coach Andy Gibbs said the team took a slow and steady approach to this year’s competition, and it all started at regionals the weekend of May 7. Gibbs said the team focused on each match at hand in order to get to the next instead of focusing on winning it all.

The 2022 championship was the first “big match experience” for both doubles teams, Gibbs said, as the doubles teams from last season needed to be replaced.

Next season: While Bair and Jenkins will graduate on May 17, a majority of the state championship team is returning for the 2022-23 school year. Gibbs said from here, the challenge will be figuring out what individual players can do and how to continue to improve — whether that be a technical, physical, or mental piece.

Additionally, Gibbs said, only time will tell which players are going to step up to fill open positions or push the handful of players currently representing the 70 student team.

Community support: Gibbs said SM East’s tennis program, which brought home state championships in girls’ and boys’ leagues this school year, is a testament to the community, which has “always supported tennis.”

The girls and boys’ tennis teams at SM East are full of student athletes who began playing as young children through community programs at clubs or nearby parks like Harmon Park, Gibbs said. It’s unique to have a community not only with ample tennis infrastructure, but also the programming to give kids an opportunity to play, he said.

The community’s support continues to feed students into the school’s tennis program, with more than 150 tennis players between the boys’ and girls’ teams, he said.

Key quote: “Even if individual matches didn’t go the way that they wanted, I was proud of the way that we responded after losses during the tournament and were able to play and continue to compete in really the first hot conditions we’ve had to play in all year — they were fantastic,” Gibbs said.