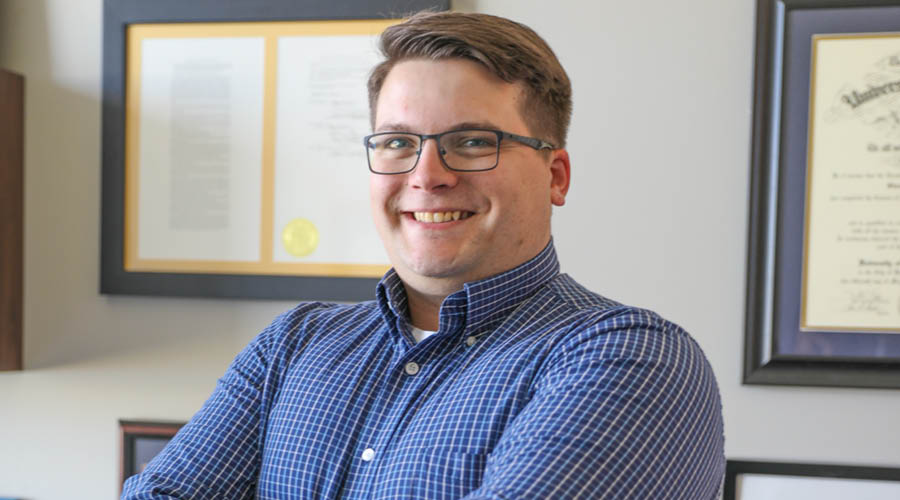 Steven Shrout has worked for the City of Lenexa since 2015 as an assistant city attorney.

Growing up on a family farm in the outskirts of Independence, Mo., Lenexa Assistant City Attorney Steven Shrout learned how to care for animals, work with his hands and find solutions to problems.

Summertime meant spending a lot of time outside doing chores like moving hay bales and scooping manure in the barn.

“It was a lot of just getting your hands dirty and just fixing things as they happen,” Steven said.

But education was always the priority.

“My mom was an English teacher and she just felt that education was probably one of the most important things for a kid — reading and writing and everything,” he said. “And although the farm was important, it wasn’t our only means of income.”

Watching his dad do the daily chores around the farm ingrained a work ethic that Steven has exercised in other areas of his life.

“Having that role model just kind of instills in you that work ethic that maybe some of us might not see or may not experience in the same way,” he said. “I’ve applied that same work ethic into my education and have carried it into my work here at the City.”

“At the time, I knew I wanted to be a lawyer and I kind of wanted to do agricultural law,” he said. “The agriculture side of things was what I was interested in, and I had that background. And then the English side was the research and writing which was important for a lot of jobs but particularly for an attorney.”
He earned a dual degree in agriculture and English from the University of Missouri in 2012. When he got to the University of Missouri-Kansas City School of Law, his focus changed.

“Agricultural law is highly specific,” Steven said. “In law school, you just get a general education of the law, not too focused on anything specific. You start applying what you’re learning through internships.”
Steven was first introduced to government work through an internship he had with WaterOne. That’s when he realized he was looking for fulfillment from his work.

“When you are in the private sector, you’re helping one individual or company with their problem on that day,” Steven said. “On the public side, especially here as in-house counsel, we’re helping an organization that is also helping an entire city to do business, grow their lives and enjoy amenities.”

“I think in order to perform well in what we do, you really have to have a desire to serve,” he said.

When people hear “assistant city attorney” or “city attorney,” they often think prosecution of criminal work. While the City of Lenexa does have a prosecution division to assess violations of city code including traffic infractions, public offenses, animal offenses and code violations, the legal department also handles risk management and general legal matters for the City.

“People don’t realize how much we advise departments from a business standpoint,” Steven said. “It may not necessarily be a legal question that we’re asked, it might just be, “Is this a good thing for a city to do?”

When archery tag was first introduced as a birthday party package option for the Lenexa Rec Center, the legal team was involved.

“I have to think through all the things that could go wrong,” Steven said. “How do we address that, whether it’s through waivers or policies and procedures that they put into place to teach people how to use them safely. And the inspections on the equipment to make sure there’s no defective equipment that might hurt somebody. We’re thinking through those things to help them implement their program in a way that provides some risk management on our side but also doesn’t entirely impede what they want to do.”

Drafting ordinances, interpreting contractual provisions, writing, researching, and advising, these are all functions of the job. Whether City staff are trying to address software contracts or creating a new event, the legal department will play a role in the process.

“That’s a lot of what an attorney is — a problem solver,” Steven said. “You’re looking at something that somebody doesn’t necessarily know how to fix or maybe know how to approach, and you come up with creative solutions to try to get to the point where whatever you’re trying to accomplish is something that can ultimately succeed.”

From playing pickleball at the Lenexa Rec Center during lunch or having a happy hour drink after work, Steven calls the legal department the legal family.

“We’re a bunch of friends,” he said. “Just getting out of the office and doing stuff that isn’t necessarily work related but building those team bonds and friendships where you can trust your co-workers.”
That bond has transformed Steven into the attorney he is today.

“Law school teaches you how to think like an attorney, but it doesn’t teach you how to be one,” Steven said. “I came in with basically a blank slate and then having my co-workers guide me and mold me into the attorney I am — that kinship where they care and want you to succeed — we care about each other.”

Steven lives in Lenexa with his wife, Michelle, and 2-year-old son, Henry. Outside of work, Steven enjoys playing tennis, fishing, playing his guitar, singing, listening to the Eagles and being a taste tester in the kitchen.