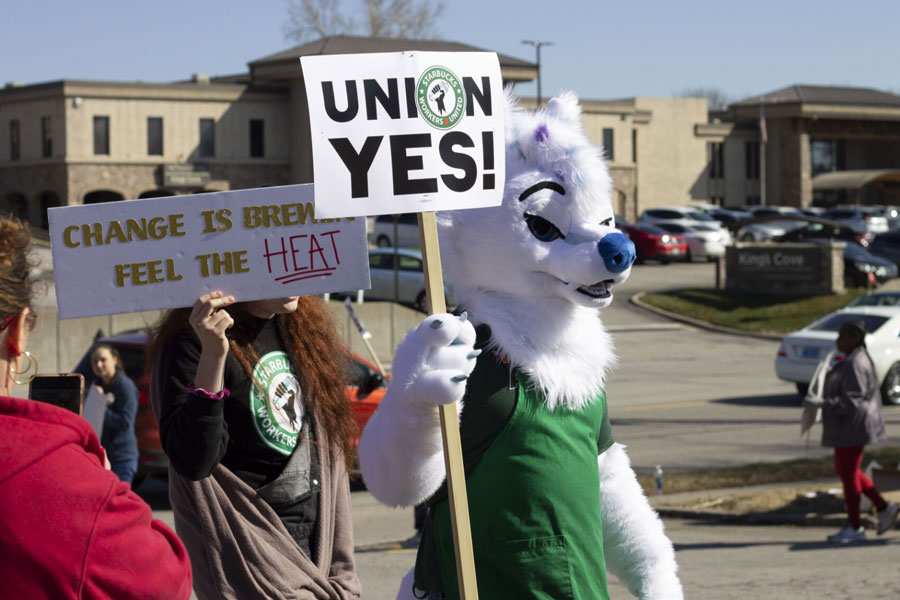 Michael Vestigo, dressed as a wolf, marches outside the Starbucks near 75th Street and I-35 in Overland Park during a March 19 strike where workers attempting to unionize demanded better treatment. Vestigo's termination is now part of two National Board of Labor Relations complaints against the Overland Park Starbucks and another location on the Country Club Plaza. File photo.

The National Board of Labor Relations filed a complaint Wednesday against two area Starbucks for preventing employees from exercising their legal right to organize.

The complaint, filed by District 14 of the NBLR, alleges the Starbucks at 75th Street & I-35 in Overland Park and the store on the Country Club Plaza wrongfully terminated Alydia Claypool, Maddie Doran and Michael Vestigo, and “constructively discharged” Hannah McCown for supporting union efforts.

Both stores have been at the forefront of union efforts for Starbucks in Kansas City since late January, joining a national wave of unionizing Starbucks stores. The 75th Street location is the only Starbucks to successfully unionize in the region so far.

Vestigo, who worked at the Overland Park store for more than a year and worked at a Starbucks kiosk for two years before that, said he was in shock after being fired April 1.

He said he had no warning and was called to the back of the store and given a letter stating he was fired for allegedly being “violent and threatening” to a manager.

“They didn’t get my side of the story or anything like that. They just said, ‘We’re not having a conversation about this. You can collect your things and go,’” says Vestigo. “I remember just kind of feeling stunned just cause it was so out of the blue.”

Vestigo, along with the other three terminated employees, were actively pushing to unionize. During a strike at the Overland Park store in late March, Vestigo wore a wolf costume and held a sign saying, “Union Yes,” while Starbucks employees and union supporters rallied outside demanding better treatment and effectively closing the store.

He was fired just a week before his store voted to form a union.

Vestigo says he was using the company’s educational benefits and having those taken away “sucked.” He says he felt targeted by Starbucks managers because of his outspoken support of union efforts but also because he struggles to defend himself one-on-one, something he says he told managers in a meeting before he was fired.

“I don’t have a lot of confidence and have trouble standing up for myself,” says Vestigo. “I am not the person to speak on the other fired partners behalf, but they share the sentiment that they [Starbucks] targeted the most vulnerable people. They kind of turned around and threw something at me and I believe it’s because they thought that I would just kind of take it lying down and I wouldn’t really put up much of a fight.”

At the store on the Plaza, stricter dress codes were imposed and employees were told if they unionized they would lose future wage increases and benefits.

The complaint demands that Starbucks reimburse the former workers and submit written apologies. A virtual hearing is scheduled for July 5 at 10 a.m.

Claypool, who has since been reinstated as a Starbucks shift supervisor, said in a statement Wednesday she was elated that the NLRB filed a complaint.

“Getting the news today that these ULP charges are being taken seriously has made me cry tears of joy for the first time since the launch of this campaign,” she said. “With the termination of myself and the two other employees at [75th & I-35], it brings me great joy to see the NLRB proceeding with these ULPs. I am optimistic that we will all get the justice we believe we deserve. This is the hope we all needed today.” 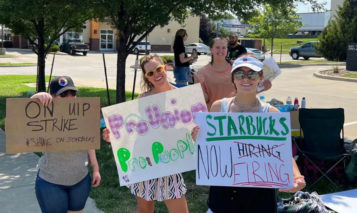 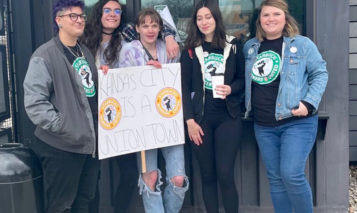