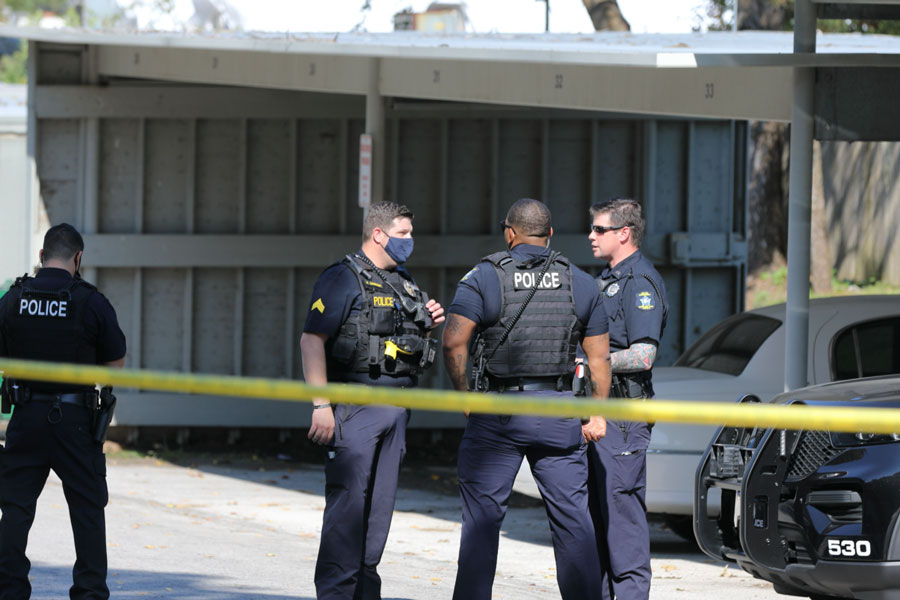 Police officials gave a presentation to the city council in response both to a recent report from a statewide equity commission, as well as the recommendations from a local civil rights group regarding police transparency. Above, Overland Park police officers on the scene of a shooting in 2020. File photo credit Mike Frizzell.

Overland Park police have already accomplished many of the recommendations from a governor’s commission on racial equity and a citizen civil rights group, and are actively working on others, Deputy Chief Eric Houston told the city council’s Public Safety Committee Wednesday.

Houston filled in for Police Chief Frank Donchez to give the department’s response on recommendations from the Kansas Commission on Racial Equity and Justice, as well as an update on five priorities of a Johnson County civil rights group seeking better ways to give feedback on police conduct.

How to give OPPD feedback

Houston said the city communications office and police have made good progress on the five-point plan for transparency issued by the Advocacy and Awareness Group of Johnson County and the Community Summit Group.

Those groups have started a petition to get law enforcement throughout Johnson County to improve the ways residents can make a complaint or give praise regarding their interactions with police.

One of the groups’ aims is to get departments to make online complaint forms clear and easy to find for residents, as well as improve their response to the feedback they receive.

Houston said instructions for giving OPPD feedback can be found on the city’s website, either through OP Cares or by typing “police complaints” into the search box on the home page.

Instructions for sending the department feedback can also be accessed directly here.

Those giving feedback can attach photos or videos and submitters can remain anonymous, although the department won’t be able to respond to the person who made the complaint in that case.

People can expect a non-automated response within three business days, Houston said, although it’s often sooner than that.

Action on items included on the checklist of the state commission on racial equity also are underway or have already been a part of the police department’s operations, Houston said on Wednesday.

The commission’s report addressed training and use of school resource officers as well as mental health training for officers.

Gov. Laura Kelly called for the commission to look at racial equity and justice over a wide range of topics. A final report was released in December.

The Overland Park Police Department responded to items specific to its own operations. Donchez wrote a response for the committee and Houston expounded on it in his spoken remarks Wednesday.

The report recommended police operate with formal memorandums of understanding with school districts and that SROs receive training in restorative justice, anti-racism, implicit bias and de-escalation.

The officers shouldn’t be used to enforce school discipline, the commission said.

Donchez’s report said the department already has contracts with Blue Valley, Shawnee Mission and Saint Thomas Aquinas schools, and that the districts collaborate in selection of SROs. The officers also get mandatory training in those subjects.

Houston emphasized that resource officers are not involved in disciplining students. In answer to a councilmember’s question, he said school administrators sometimes ask for an officer if there is a potential for violence, but often that officer’s presence is enough to diffuse the situation.

“There could be some situation with a potential for violence or maybe a history of that that our officer may be requested to stand by,” he said, “but that’s what they’re doing. They’re standing by.”

Houston was also asked about recent reports that resource officers are involved in a disproportionate number of incidents that involve minority students. Councilmember Paul Lyons asked if the police department kept its own data on that.

Houston said some demographic data is collected, for example, on arrest reports. But he did not know if it had been sorted to answer that particular question.

“Yes, it’s collected. It’s a matter of how it’s reported,” he said.

The governor’s commission also recommended co-responders be on mental health calls and that police officers get Crisis Intervention Training.

The Overland Park department has been a “pioneer in the co-responder arena,” Donchez wrote in his own remarks and has continued its commitment with its new behavioral health unit.

All commissioned officers are certified in mental health first aid, with the goal to have them also Crisis Intervention Training certified, his report said. Currently over half of the officers have CIT training.