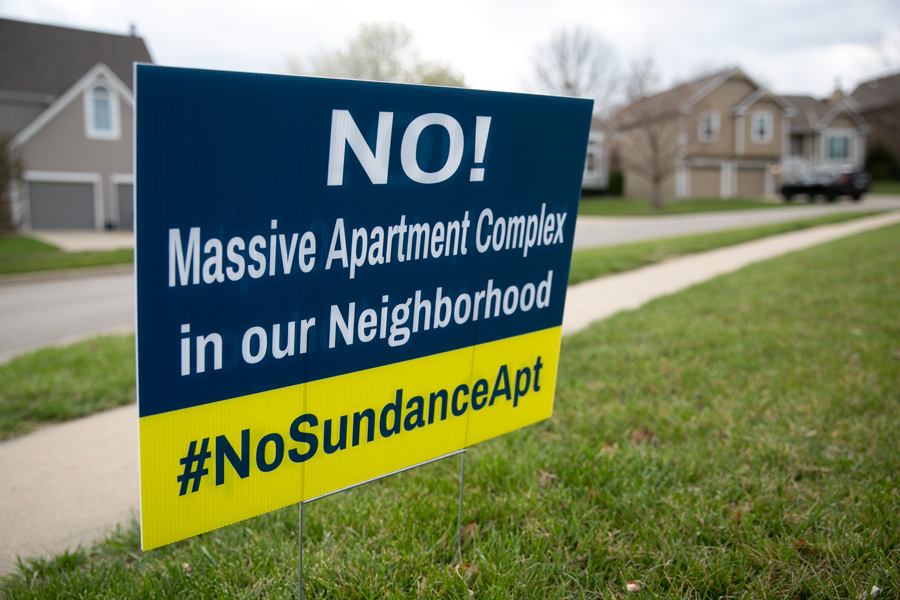 Neighboring homeowners opposed the Sundance apartment project near Johnson Drive and Woodland Drive. Above, a yard sign against the proposal. File photo.

A 239-unit apartment complex proposal that has drawn the adamant opposition of its nearest neighbors was unanimously denied rezoning Monday night by the Shawnee City Council.

The Sundance Shawnee project, at Johnson Drive and Woodland Drive, would have consisted of a mix of one- two- and three- bedroom apartments on 21 acres in a mostly undeveloped field near a former quarry in northwest Shawnee.

Its developer, Minnesota-based Timberland Partners, characterized it as designed for young professionals who eventually want to own their own homes.

Ryan Sailer, vice president of real estate development with Timberland, said the company took pains to design the project so it would fit in with surrounding single-family homes. His presentation also addressed the many concerns neighbors previously brought up about traffic, water drainage, environmental impact, school crowding and potential for crime.

“We didn’t come to Shawnee looking for controversy,” he said.

They found it nonetheless.

Neighbors in the nearby Lakepointe subdivision brought their doubts to the council in a lengthy public comment session Monday. Their attempt for a protest petition fell short of the required number of valid signers, but more than a thousand signed a Change.org petition against the project.

Lakepointe, according to its Homeowners Association website, is 367 homes around a 16-acre lake, in an area that also has five ponds, fountains, a waterfall and a private playground. Realtor.com puts the median listing price for homes there at $350,000.

Eleven speakers, some of whom were designated to represent groups of residents, shared a detailed list of their reasons for opposing the project. Other interested residents filled the council chambers and overflow seats in the foyer.

Some of residents key points on Monday:

Sailer said his company has tried to address those concerns.

He pointed out they agreed to build a fence separating the development from Lakepointe’s lake, to protect the subdivision’s privacy. But because the fence had to be on a property line, it meant tearing out some mature trees – another objection posed by Lakepointe residents.

He also brought statistics that showed apartment proximity doesn’t bring down home values, and he said the price points for the apartments were on a par with Lakepointe mortgages, which averaged $1,376 before taxes and insurance.

Developer representatives also pointed out that the council was considering a zoning issue. Details about such things as tree replacement generally come up for council and planning approval later.

Councilmember Tammy Thomas compared the project to Lenexa’s City Center, which has retail and entertainment surrounded by apartments. City Center is far more attractive to young professionals, she said. But no such options exist near the Sundance project, she said.

“What you’re offering and looking for young professionals don’t match. They simply do not match,” Thomas said.

Thomas and others referenced Shawnee’s history and ranking as a hot market for single-family homes.

“I’m not saying this is a bad development. What you’ve designed, I’m not saying that’s bad. This is a single-family residential area. And there’s a lot of history right here we’re about Shawnee. We’re about history. We’re about moving and maintaining and appreciating what other people did before us,” she said.

Council President Eric Jenkins said the project was just too dense for him.

“This destroys the character and neighborhood,” he said. “I think this council really feels strongly about protecting our community and our citizens and doing what’s best. Something we hear every meeting we go to is they love the hometown feel. Okay, well, I love the hometown feel, too. That’s kind of what puts Shawnee on the map.”

Councilmember Jill Chalfie said she struggled with her vote. She reminded those present that Lakepointe was itself once a new development that owners of nearby farm homes might have once opposed. But she, too, said she disliked the density of the project.

In the end the council voted to deny the rezoning in an unanimous vote.