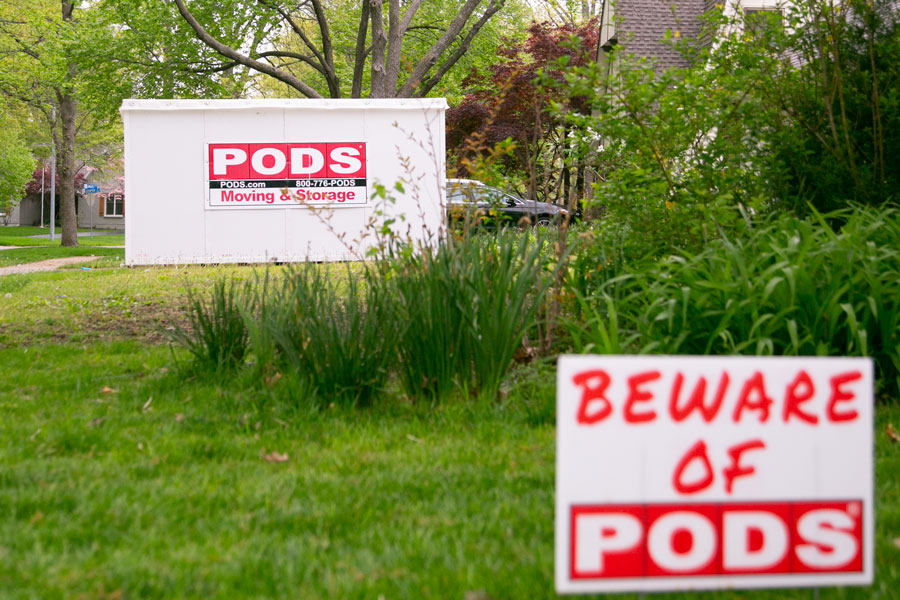 Some residents and businesses are keeping portable storage units on their properties for extended periods, causing a recent increase in complaints. A newly approved ordinance means storage pods usage needs to adhere to the following starting July 1:

Current practices: When the city receives a complaint about storage pods sitting on properties for extended periods, codes enforcement officers can only ask owners to remove the units. While this works in most cases, some refuse to comply and reference the lack of time frame limitations in the city code.

That’s why city staff developed the ordinance — to give codes enforcement officers a mechanism with which to make those chronic storage pod cases comply.

Council discussion: The council committee of the whole extensively discussed this issue at its April 18 meeting. Councilmember Dave Robinson, at that time, said 14 days is not a long enough time for residents who use storage pods. He said in his own experience, a storage pod sat on his property for three additional weeks after he used and emptied it.

Robinson removed the storage pod ordinance from the May 2 consent agenda and reiterated these same concerns. The city council spent a considerable time discussing an increase to the time frame, including a 30-day and a 21-day option.

Ultimately, the city council approved amending the ordinance to take effect on July 1 in an effort to provide ample notification to residents and businesses with storage pods currently on their property.

Resident input: Donna Knoell, a Prairie Village resident, asked the city council during public comment not to adopt a storage pod ordinance. Knoell said after her kitchen flooded due to two broken pipes, she and her husband needed a storage pod to safely store belongings.

Knoell said she was instructed by her insurance company’s claims department not to repair damages until the company issued approval. The water has been removed from the kitchen and the broken pipes have been repaired, she said.

It would be inconvenient for the Knoells to move the items from the storage pod to a different location because they need access to many of the items, Knoell said.

Deputy City Administrator Jamie Robichaud said the city first received a complaint about the Knoell’s storage pod in November 2021. Robichaud said city staff doesn’t always know specifics about storage pod situations, but if a resident is waiting on something like an insurance claim the city would likely require proof.

This is because in the past, some properties claimed to be working on a project or waiting on an insurance company, but that turned out to be false, Robichaud said.

The details: Exceptions to the limitations include storage pods used in connection to a construction project with a valid permit, if it’s used with a special use or event permit, or if/when the city or a portion of it has been declared a disaster area.

Code enforcement officers can also work with residents on a case-by-case basis if there is some sort of special or extenuating circumstance. Robichaud said officers will use their discretion and historic knowledge of a property to extend the 14-day limit.

Key quote: “There are going to be properties that are problematic and continue to have code violations and those properties aren’t going to be given — we’re not going to take one excuse after the other,” Robichaud said. “We’re going to have to make sure that there’s truly a project happening and progress is being made on it.”