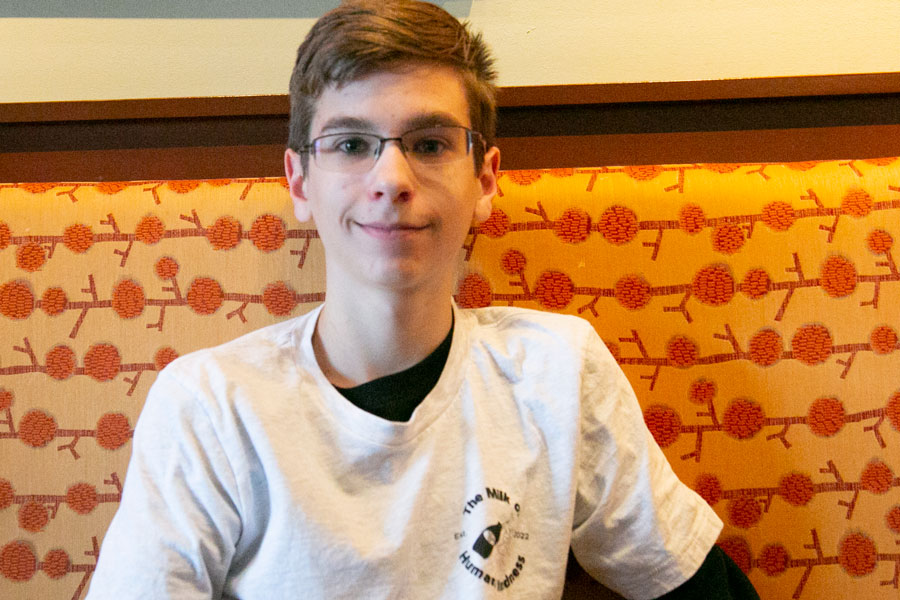 Nathan Mestel, an eighth grader at Westridge Middle School in Shawnee Mission, wants you to know about food waste.

Metsel participated last year in the district’s first-ever Next Great Idea pitch contest and was named one of three winners of the inaugural competition.

It came with a $2,500 prize to help further his idea. Now, more than a year later, he’s growing his idea focused on food waste education into a small venture.

Metsel’s brainchild The Milk of Human Kindness made its debut last month as a booth at the Lenexa Farmers Market.

Why food waste? The Next Great Idea pitch, a Shark Tank-esque competition for Shawnee Mission students, gave Mestel a reason to dig into a problem.

He said he knew he wanted to compete, and as he looked around his room brainstorming problems to address, he noticed a magazine that featured a United Nations study about food waste.

Then, he got to work.

The idea: The mission of The Milk of Human Kindness is to reduce food waste. This includes educating food consumers about things like expiration dates printed on food, learning about food waste and implementing a meal plan for yourself or your family.

A key aspect of Mestel’s approach is to give people recipes and instructions for reusing food products to avoid food waste, such as using sour milk to make ricotta cheese or browned bananas to make banana bread.

More examples of this can be found on The Milk of Human Kindness website here.

The impact: Mestel said The Milk of Human Kindness greatly changed the way he and his family use food themselves. His family has implemented each solution he’s researched from reusing food to meal planning.

Mestel said he’s set up an online form for people to share their own ideas about food waste reduction or ask questions.

What’s next: Mestel is now a merchant at the Lenexa Farmers’ Market, where his efforts will largely be educational at first, he said.

He plans to add more to his farmers’ market booth over time, including ricotta and banana muffin samples once he gets the proper licensing.

For now, he has signage, handmade charts and graphics helping explain food waste and his methods for reducing it.

Those who wish to support his growing cause can purchase T-shirts from the booth, as well.

He is also hoping to soon partner with a local grocery store to set up regular pick-ups for unsold milk that the store plans to toss out. Mestel plans to use that milk for more ricotta.

Key quote: “Kids can sit there all day and say, ‘Oh man, this problem sucks,’ but they might not go out and do anything about it because they might not have the resources or really even a reason to do anything about it,” Mestel said. “Now, I feel like — hopefully — being able to help people reduce food waste in their own lives, I feel like that will help make a much bigger impact than I was planning on initially.”