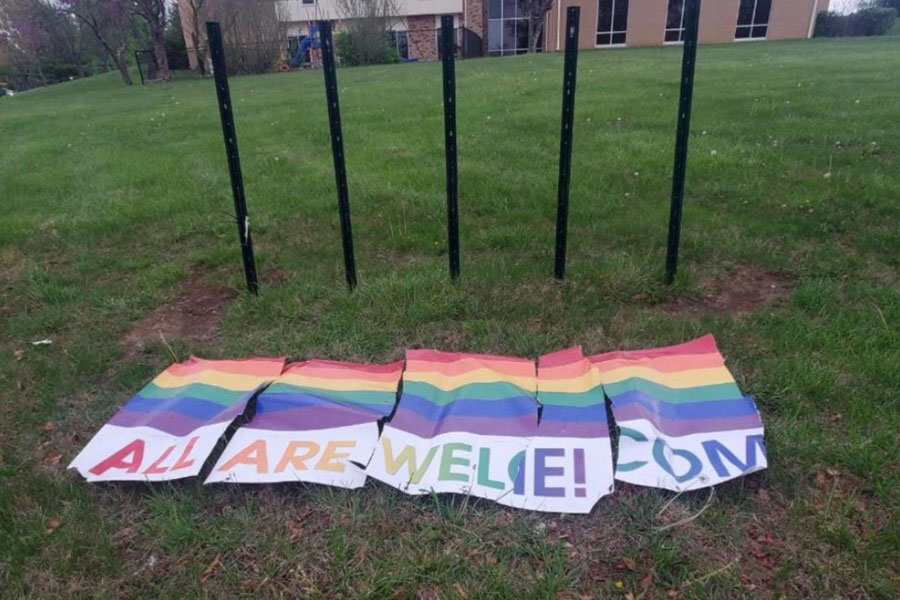 Overland Park Police are investigating a possible hate crime after a banner showing support for the LGBTQ community was vandalized in front of a church late last week.

The details: The banner reads, “All are welcome,” with rainbow colors and is situated outside Indian Heights Methodist Church, 10211 Nall Avenue.

The damage to the sign was first noticed Friday morning by Pastor Ali Haynes.

She said she noticed pieces of the sign on the ground and, at first, thought it might have possibly been blown down by a storm.

But taking a closer look, she realized the banner had been purposefully destroyed.

“I found it in five pieces,” Haynes said. “It clearly has been slashed by something, like sliced. There were like eight zip ties that hold it on and those were all cut as well.”

Police response: Haynes said she called the Overland Park Police Department to file a report soon after that.

Department spokesperson John Lacy said OPPD is currently working to assign a detective to the case, who will look into the incident further by reviewing footage from nearby surveillance cameras and speaking to possible witnesses in the surrounding area.

“Right now, this is considered a hate crime,” Lacy said in a statement to the Post. “We’re going to take a look at it as we have zero tolerance when it comes to any group being targeted.”

According to Lacy, there are currently no leads at this time.

Banner’s history: This is the second time a banner bearing the “All are welcome” message has been tampered with since the church first put one up in 2019.

Haynes said the sign is meant to show love and respect to people in the LGBTQ community.

Shortly after putting the banner up for the first time more than three year ago, she said it was stolen off the lawn of the church.

The church later replaced that one with the one that was cut up last week.

What’s next: In lieu of replacing the banner again, Haynes instead zip-tied the pieces together and reposted it in the same place on the church’s lawn.

“It actually looks pretty cool because it’s torn and tattered, and to me that is who the church is for,” Haynes said. “It’s for everybody no matter how broken or beaten down you feel in the world.”

There are plans to eventually replace the sign with donations the church has received from the community.

Key quote: “This has really made me realize the impact this sign has on the community,” Haynes said. “People are grateful to have the sign because they themselves fit into that community or someone they love does.”