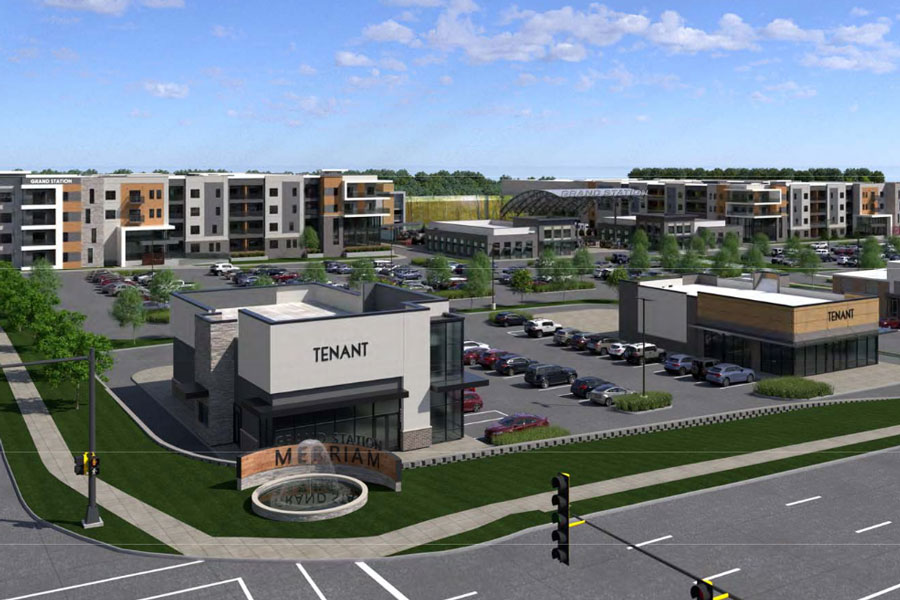 Drake Development is now dubbing their project at the former Kmart site as Merriam Grand Station, centered around restaurants and two apartment buildings. The rendering above is looking southwest from Shawnee Mission Parkway and Antioch Road. Image via city documents.

The Merriam City Council on Monday got its first look at a development concept that could remake the abandoned Kmart property on Shawnee Mission Parkway.

After some uncertainty over the property’s future, Overland Park-based Drake Development appears to be holding steady on its plans to turn the long-vacant lot into a mixed-use development.

But several more steps must occur before any plans for the prominent site are finalized.

This plan has not yet been formally submitted to the city and is still subject to change, Merriam’s Community Development Director Bryan Dyer told the city council on Monday.

Incentive changes: Drake is requesting tax increment financing, or TIF, as well as industrial revenue bonds, or IRB, to reduce the sales tax on building materials, according to city documents.

Additionally, the developer’s request for an IRB for a 10-year property tax abatement on the two apartment buildings means those buildings could not be inside the boundaries of Merriam’s Interstate-35 TIF district.

This ordinance will not go into effect until the project’s final plat is filed with the county, which city staff describes as an “off ramp” in the event that Drake’s plans fall through.

City staff is still in the middle of redevelopment agreement negotiations, but approximate costs as outlined in city documents are below.

Background: Nearly a year ago, city staff confirmed Drake was likely to submit a TIF application to the city for the Kmart site. The city expanded its I-35 TIF district in June 2021 to include the site, opening the door for a potential redevelopment agreement with any developer.

Drake told the Post in December an application for a mixed-use development was on its way.

After the city council pressed the developers on the Kmart property’s unpaid taxes, Drake did finally submit a TIF plan for the site in February detailing a development plan that included a grocery store, restaurant and residences.

About a week later, the city told the Post in a statement that it had “been unable to strike an appropriate balance with the current proposal” that helps businesses thrive and protects the city’s financial interests.

What happens next? Here’s a breakdown of the next steps for this project, as outlined by city staff:

Key quote: “Since I’ve been on council, which has been a long time, what people have said to me is ‘We want nice, sit-down restaurants,’” Councilmember Christine Evans Hands said. “We are giving them that, we are giving them something they specifically ask for.”