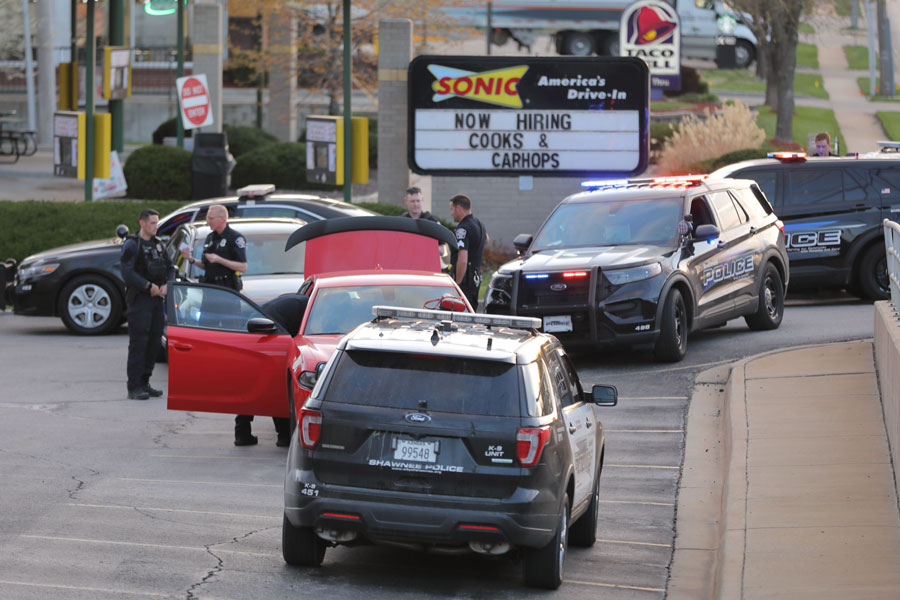 Police pulled over and searched the red car, above, Thursday evening following an alleged shooting along 75th Street. Nobody was injured. Photo credit Mike Frizzell.

Shawnee Police say two people have been arrested following a shooting between two vehicles near 75th Street and Nieman Road on Thursday evening.

A 24-year-old Kansas City, Kansas resident has been arrested and faces a potential charge in connection to the shooting.

A 28-year-old woman was also taken into custody on outstanding warrants.

Baker said the victim’s car was not hit by gunfire or damaged during the incident and nobody was injured.

Shawnee Police confirm they detained four people after a report of gunshots fired from a car near 75th Street and Nieman Road about 7:20 Thursday evening.

Officers were called to the QuikTrip, 10301 West 75th Street, to meet with a person reporting that their vehicle had been shot at near 75th Street and Nieman Road. Police have not said if any of the gunfire hit the victim’s vehicle.

Recorded radio traffic indicates four suspects were inside a red Dodge Charger when the shots were fired at the victim’s vehicle. The Charger was last seen southbound on Nieman Road.

Just before 7:30, officers in the area spotted a red Dodge Charger driving eastbound on 75th Street near Switzer Road, near the QuikTrip to which they had been called.

Police caught up with the vehicle about a block away just west of the on-ramp to southbound Interstate 35.

They stopped the car in the parking lot of Big Bob’s Flooring Outlet, 10001 W. 75th Street, and searched the vehicle. Officers from the Overland Park Police Department responded to assist with the car stop.

At the scene of the car stop, Sergeant Derek Miller confirmed four people had been detained.

No injuries were reported from the initial gunshots along Nieman Road. Officers were still in the beginning stages of their investigation.

Police briefly closed the southbound lanes of Nieman Road just south of 75th Street, where the shots were allegedly fired, to search for possible evidence in the street. As of publication, it’s unknown if anything was found.

The Post has reached out to Shawnee Police for more information, and this report will be updated as we learn more details.