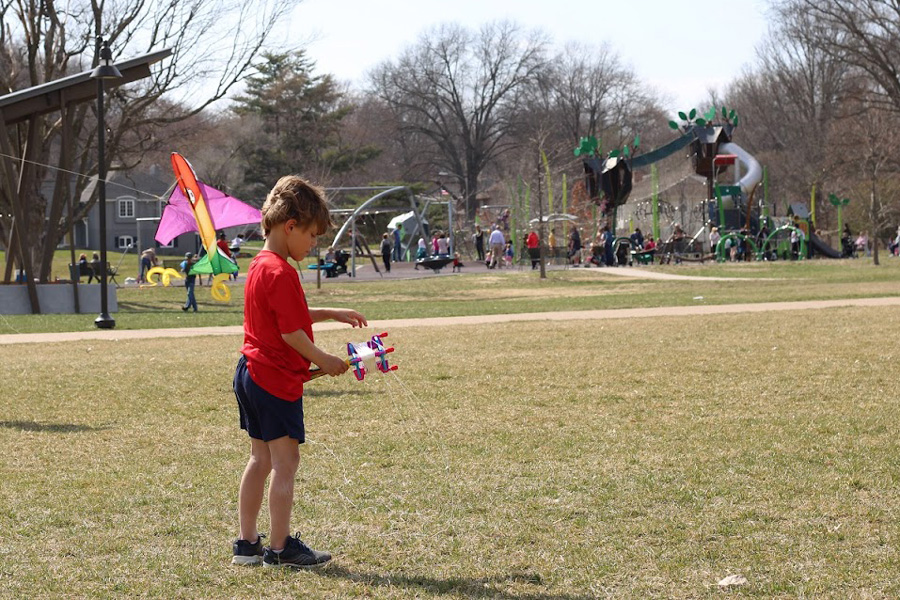 It's spring in the Midwest, which means check the forecast before you do anything like this. Above, flying kites at Meadowbrook Park in Prairie Village. File photo.

Johnson County residents might be confused about what season it is right now. In other words, it’s April again in the Midwest.

The week began with some freezing graupel on Easter Day and will see some potentially heavy thunderstorms before ending up with some sun-dappled patio weather.

Here’s what to expect and how to prepare for the rest of this up-and-down (but mostly trending up) weather week.

Tuesday: After a chilly start to the day, Tuesday afternoon will warm up and be partly sunny with a 20% chance of rain after 2 p.m.

We know, it's cold this morning. Make sure to bundle up!

On the flip side, warmer weather returns Wednesday. However…with this warm-up comes the possibility for some strong storms.#mowx #kswx pic.twitter.com/yiPds9lol2

According to the National Weather Service, we might see thunderstorms after 1 a.m. tonight, which could continue into the early morning Wednesday.

Wednesday and Thursday: Forecasters say Wednesday should see a high of 67 and a low of 48.

There’s a likelihood (a 70% chance) of more showers throughout Wednesday morning and into the early afternoon with total precipitation on that day of between a quarter inch and half inch of rain expected.

There’s less of a chance of thunderstorms on Thursday, with a 30% chance of rain during the day and a 50% at night.

Thursday should also start to see warming temperatures with a high of 74 and a low of 62 that day.

The weekend: Meteorologists currently expect Johnson County and the Kansas City metro to get warmer on Friday and Saturday.

Highs are predicted to be in the low 80s to high 70s for the weekend.

But rain and some thunderstorms might spoil the vibe a bit. According to the National Weather Service, there’s another 70% chance of thunderstorms on Saturday night.

The NWS in Kansas City urges residents to be mindful of this week’s cooler temperatures, especially early in the week, if you are planning on gardening or planting flowers.

A Freeze Warning & Frost Advisory are in effect now until 9am. To be honest, it is entirely too cold for our taste this morning! Any outdoor plants would agree, as near-freezing to freezing temps could damage sensitive vegetation.

How are you all feeling about this forecast? pic.twitter.com/3SNC2h1yVU