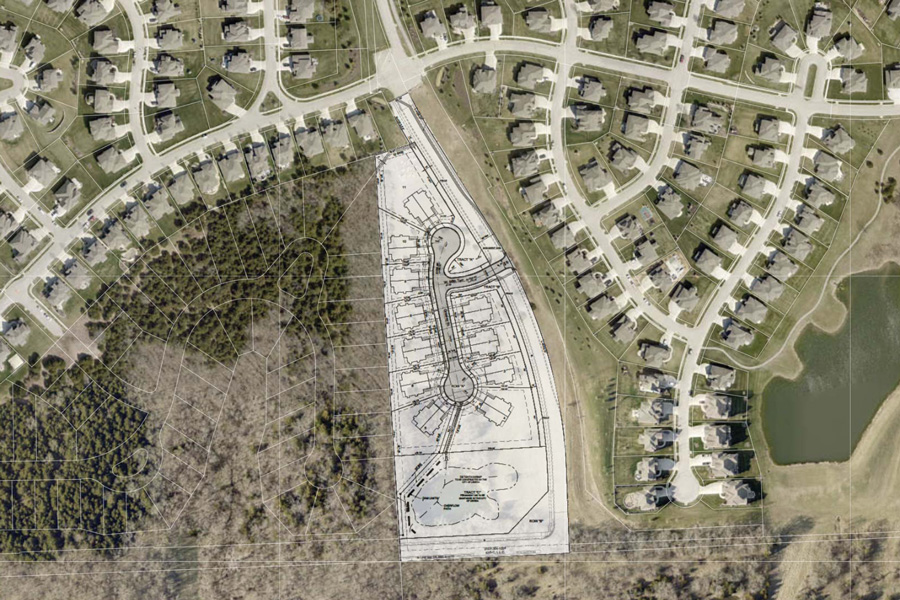 Editor’s note: The Lenexa City Council on Tuesday, April 19, unanimously approved the preliminary plan and plat, per a recommendation from the city’s planning commission.

Lenexa has advanced plans for a new duplex project in the southwest part of the city.

Where exactly: Located on just over nine acres at the northwest corner of the future West 99th Street and future Clare Road, Wheatley Pointe West will comprise 11 two-family structures for a total of 22 dwelling units.

Unit sizes range between 2,300 to 2,400 square feet with three to four bedrooms each. Once built, the duplexes will be available for purchase.

A few homeowners who live next to Wheatley Pointe West came out to oppose the project, mostly out of concern that duplexes do not fit with the character of their existing neighborhoods.

Some commissioners said perimeter landscaping could provide some screening of the duplexes from the neighboring subdivisions.

Ultimately, the Lenexa Planning Commission voted 6-0 to recommend approval of the preliminary plan and plat for Duplexes for Wheatley Pointe West. Commissioners Don Horine and Jason Leib were absent. The nine-member commission has one vacancy.

Key quote from neighbor: “I realize everything is already in the zoning rules, it’s within those, but it’s just more of a cultural thing, maybe a neighborhood ambience thing, a feeling when you come in mind when you see all these duplexes, and you learn these homes that go anywhere from $700,000 to $900,000s today.” – Paul Cook, Canyon Creek Highlands neighbor

Key quote from planning commission: “There seems to be a trend in our community that’s disturbing me that people that want to buy a duplex are somehow lesser than others. I want to point out that throughout our community, we have approved numerous subdivisions, a mix of housing … I think it’s smart, it’s small, being very intelligent about the elevations and mixing those up, not cramming as many square feet in that as possible from a density standpoint.” – Commissioner Mike Burson

Next steps: The Lenexa City Council is slated to consider this project Tuesday, April 19.