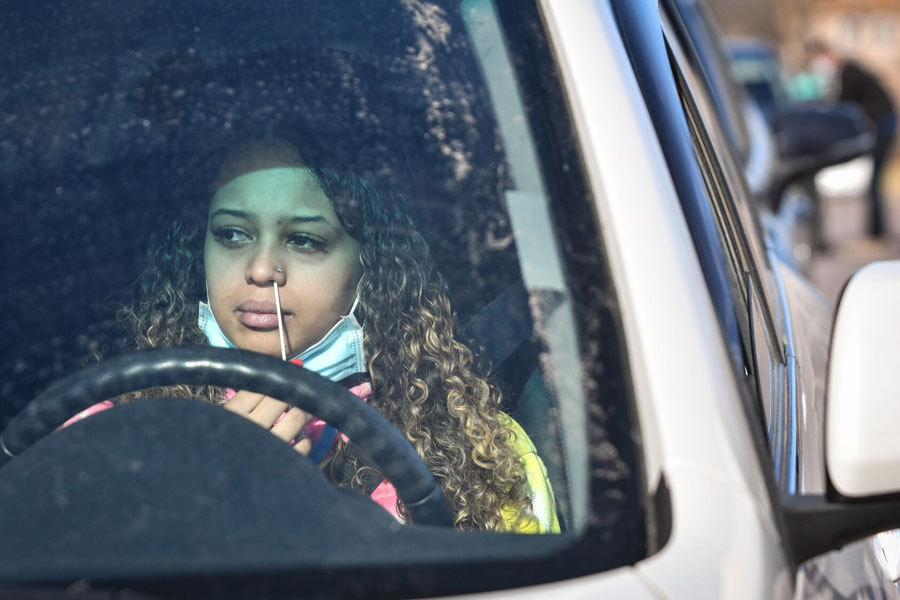 According to county data, percent positivity is now 6.1%, compared to 2.2% a month ago, but officials caution that's likely an undercount, given that most testing is now being done at home and people may not be reporting their results. Above, a woman gets tested at a mass drive-thru site in Overland Park earlier this year. File photo courtesy KCUR 89.3.

A new and highly transmissible subvariant of COVID-19 has found its way to Johnson County, resulting in an uptick in cases this week and a recommendation for those at high risk to be vigilant and wear masks.

Elizabeth Holzschuh, director of epidemiology for the county health department, told county commissioners Thursday that the case rate and positive test percentages are trending upward, indicating that the BA.2 version of Omicron coronavirus is here.

“It does appear that BA.2, which has hit other cities as well as other states, is here and is causing an impact,” she said. “People should be aware that if they are at high risk or are gathering in large venues, they should likely be masked as an extra precaution to prevent transmission.”

However, there was no recommendation that the county return to previous mitigations such as mask rules.

The county’s COVID-19 dashboard has shown a small but persistent increase in cases since a low point was reached about three weeks ago.

However the data may not be an accurate representation of reality, Holzschuh said.

“Those numbers are likely dramatically undercounting what is happening in our community,” because of the wide availability of at-home tests whose results may not be reported, she said.

Holzschuh said wastewater analysis confirms an increased concentration of BA.2 in the area as well.

Arrival of BA.2 in Johnson County

According to the county health department’s epidemiology team, the new version of the coronavirus was first detected in a Johnson County resident on Jan. 12 of this year and has been on the rise ever since.

The most recent analysis by Biobot, the company that examines wastewater samples for the coronavirus, found that BA.2, as of March 30, accounts for 56% of the variants.

The subvariant is easier to catch than the previous versions of COVID-19 and has caused surges in other countries. Cases have been rising in the northeastern United States. BA.2 now represents 86% of cases nationwide according to the Centers for Disease Control.

How the new strain affects hospitalizations remains to be seen. Hospitalization from COVID usually lags behind any increases in cases, Holzschuh said.

The University of Kansas Hospital System’s daily report on Thursday showed five patients in the hospital with active infections, said Dr. Dana Hawkinson, infectious disease specialist. It may take up to three weeks for significant increases in COVID-related hospitalizations to show up, he said.

According to the CDC website, Johnson County is still considered a low risk area for the disease.

Holzschuh cautioned that although the county shows up as “green” on that site, “what that really means is that if you get ill with COVID-19 there is a hospital bed for you.”

Holzschuh told commissioners during a question-and-answer session Thursday that the county health department has scaled back its contact tracing and has ended the contracts of almost all tracers. The move decreases the number of staffers for tracing from 30 to three, she said.

Those remaining have concentrated on schools and daycare outbreaks, she said.

In answer to another question Holzschuh encouraged older residents and people with comorbidities, another chronic medical condition that could exacerbate the impacts of COVID-19, to get a second booster shot.

The boosters recently became available to people over 50 and certain immunocompromised individuals.

“If you are in that age group or at high risk, I definitely would recommend that second booster,” she said.