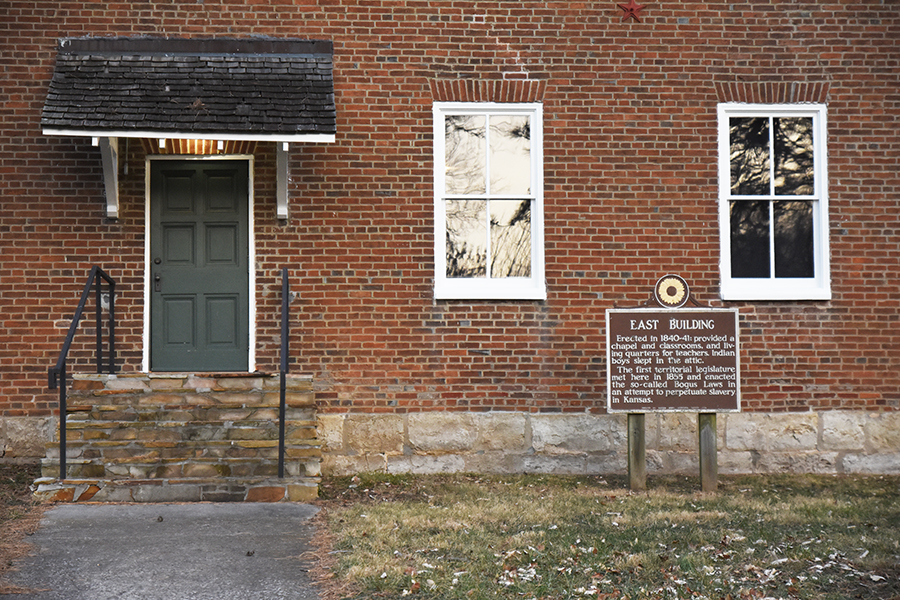 The Shawnee Tribe recently received a grant for baseline research into Shawnee Indian Mission, a former boarding school for Native American children. Above, the East building at the Mission. File photo.

The National Trust for Historic Preservation has awarded the Shawnee Tribe $25,000 for baseline research into the history of the Shawnee Indian Mission in Fairway.

Why it matters: Much of the inner workings of the boarding school, which operated from the 1830s up to the start of the Civil War, are largely unknown. It was founded and run by Johnson County namesake, the Rev. Thomas Johnson.

The school, which was referred to at the time as the Shawnee Indian Manual Labor School, spanned 2,000 acres of land in the then-territory of Kansas that the Shawnee people and other tribes had been forcibly relocated to following the Indian Removal Act of 1830.

All the known history about the Shawnee Indian Mission comes from the Kansas State Historical Society rather than the Shawnee Tribe itself.

Since the mission school was operated by Methodist missionaries and not the government, it wasn’t included in a July 2021 federal initiative to investigate U.S. Indian boarding schools.

Months later, Barnes announced a partnership between the Shawnee Tribe and the city of Fairway with the intention of highlighting the tribe’s history and perspectives about the former boarding school.

The grant: The $25,000 award, from NTHP’s “Telling the Full History Preservation Fund” will help the tribe cover part of the $75,000 to $95,000 cost of a historic structure report, the Shawnee Tribe’s Director of Communications Maggie Boyett told the Post via email.

Boyett said the Architectural Resources Group will prepare the historic structure report, which documents “the history and physical characteristics of the site, (and) their condition at present.” Work funded by the grant is expected to begin this month, she said.

There is “no other planning effort” that will have a larger impact on the historic site — and therefore the tribe — than the report, Boyett said.

What’s next: The historic structure report will serve as a first step for a master plan and an interpretive plan for the former boarding school, Boyett said.

Ultimately, she said, this will lead to an updated program at the Mission “that acknowledges the difficult and complex themes” it represents.

Key quote: “It is estimated that more than 40,000 children may be buried in unmarked graves at labor and boarding school sites across the United States,” Barnes said during a press conference last week. “For far too long, the truth about American Indian boarding schools has been absent from national conversations. Others may have forgotten, but America’s tribal nations have not.”