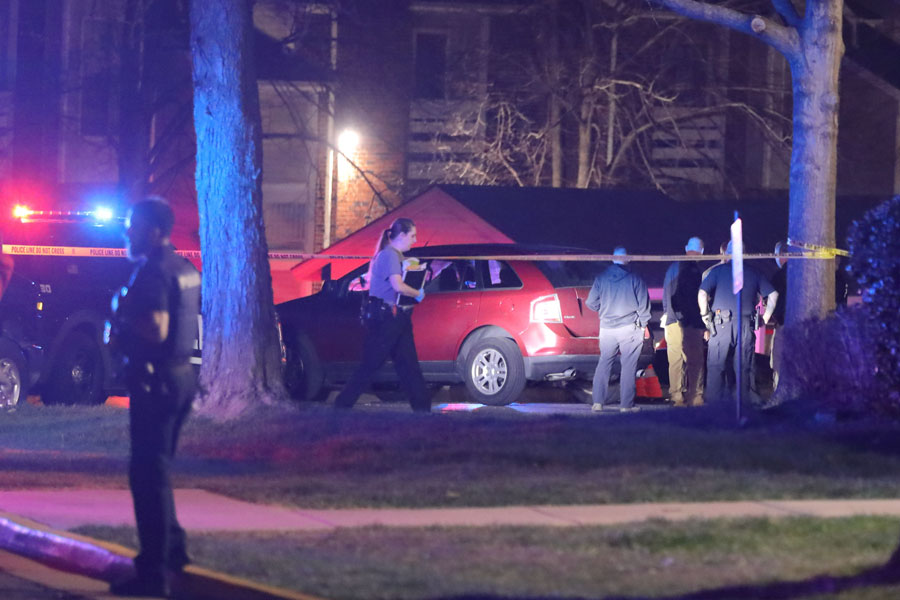 Investigators gather in the parking lot of the SilverWood Apartments on Foxridge Drive in Mission Sunday night. Police say two teenage victims were found shout in the complex's parking lot. One victim, a male, was pronounced dead at the scene. Photo credit Mike Frizzell.

Mission Police say one person was killed and another injured in a double shooting Sunday evening.

Chief Dan Madden says officers responded to the SilverWood Apartments in the 5100 block of Foxridge Drive at about 8:50 p.m. on reports of shots fired.

Madden says arriving officers found two teenage victims in the apartment complex’s parking lot. A male was pronounced dead at the scene. A female was transported by ambulance to an area hospital.

Police are looking for a suspect but say there is no current threat to other residents.

Recorded radio traffic states that the female victim is in her early teens and was transported to Children’s Mercy Hospital in Kansas City, Missouri, in stable condition.

“This is a sad night here in Mission,” Madden said during a press briefing near the scene. “It’s devastating that this type of violence could occur in this city.”

Police believe the suspect left the area in a vehicle. Witnesses told officers that an SUV was seen speeding away just after the shots were heard.

“What’s important to know right now, there’s no ongoing threat to our residents here in the city,” Madden said. “We’re going to do our best to bring this person or persons to justice for the families of the person deceased.”

The female victim hospitalized on Sunday night is expected to survive, according to the city’s statement.

Update Monday 7:25 AM: Female victim who was hospitalized Sunday night is expected to survive. Neither victim is a resident of Mission. Metro agencies are assisting with the investigation.

Officers from numerous northern Johnson County agencies responded to assist in holding a perimeter immediately after the call was dispatched. This included officers from Merriam, Fairway, Roeland Park, Prairie Village, and Mission Hills.

Check back with this report for updates as more information becomes available from police.