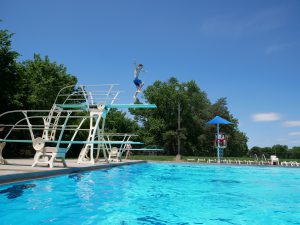 This summer, Overland Park residents will be able to swim at three of the city’s five outdoor pools.

At Wednesday’s Community Development Committee meeting, parks and aquatics staff gave an update on how outdoor pool operations will be impacted this summer due to an ongoing shortage of lifeguards.

Details: Three of the city’s outdoor pools will open for the summer swim season on May 9, including:

The Bluejacket Pool will be closed this summer, and the Marty Pool has been permanently decommissioned to make way for a new city park on that site.

The indoor pools at the Matt Ross Community Center, which are open year-round, will also continue operating as they currently are.

Lifeguard challenges: Aquatics director Renee Reis said in addition to some structural issues at the Bluejacket Pool, these pools were chosen to reopen this summer partly based on which ones are the most accessible to the lifeguards the city currently has.

“With gas prices being $4 a gallon, I have to be very careful on where they will drive to because some will not drive very far,” she said. “Also (many of them have) their parents driving them to work, and the hours that we need are typically when parents are working as well.”

She said outreach to both current staff and efforts to find new staff have both gone drastically up this year.

Why it matters: This follows a struggle on the city’s part to find lifeguards in the last few months, due to a lifeguard shortage similar to the one that has impacted other Johnson County cities during the COVID-19 pandemic.

Overland Park raised the starting salary for lifeguards from $10 to $13 per hour in an effort to attract more applicants.

Parks director Jermel Stevenson said in his 30 years working in parks, he has never seen this severe of a lifeguard shortage before.

“We have had quite a challenge in the preseason here, finding enough lifeguards to open safely,” he said. “Even at the national level, we’re having those conversations about why that’s happening.”