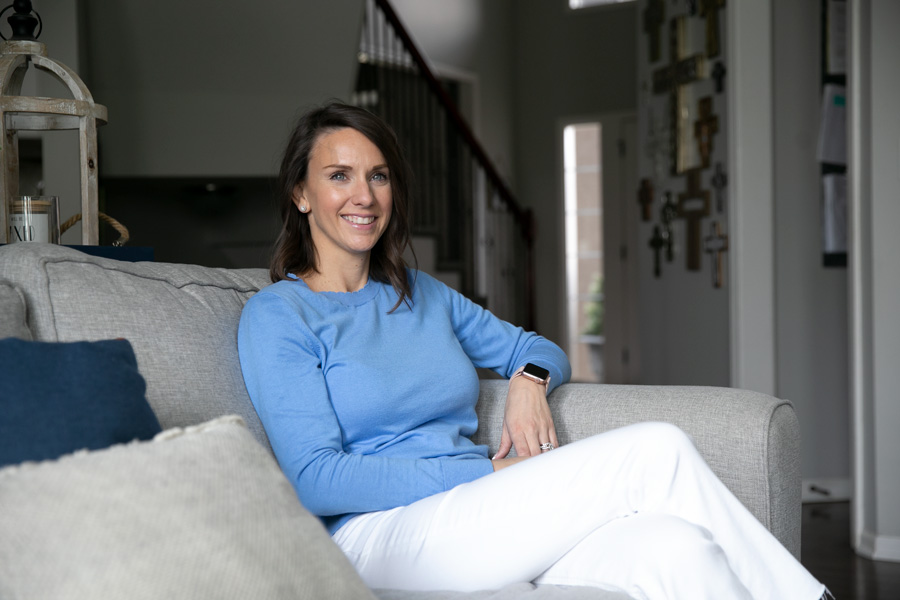 In 2015, Emily Dumler was given only six months to live with an aggressive form of lymphoma. The Shawnee mother of three then completed a clinical trial of a breakthrough treatment called CAR T-cell therapy, and she has been cancer-free for seven years. Photo credit Leah Wankum.

After two years battling an aggressive form of cancer, Emily Dumler defeated it in only five minutes.

• Emily Dumler, a Shawnee mother of three, was the third person in the world to complete a breakthrough treatment for B-cell lymphoma, an aggressive form of cancer.

Dumler was first diagnosed with B-cell lymphoma, a cancer that starts in the lymph system, nearly a decade ago.

In 2015, the Shawnee mother of three was given six months to live after a brutal stem cell transplant failed to heal her body during another intense round of chemotherapy.

That’s when she entered a clinical trial for a new immunotherapy treatment that would make her just the third person in the world to complete the regimen.

Now, years later, she sees that other cancer patients may get the benefit of the treatment that she credits with saving her life.

That CAR T-cell therapy with the brand name of  Yescarta just received approval on Friday from the U.S. Food and Drug Administration to treat more patients just like her.

“Of course, it gave me my life back,” Dumler said, “but to now know that patients can a) have hope at a future, and b) be able to maybe bypass another treatment — which just means, you know, another six months of awful side effects —just to shorten the treatment time, it feels amazing just to see how far it’s come, and that so many patients can have access to this so much easier.”

Headed up by Kite, which is owned by pharmaceutical giant Gilead, Yescarta engineers a patient’s own blood to treat their cancer.

It’s the first and only CAR T-cell therapy approved by the FDA to treat patients who relapse or don’t respond to their first round of chemotherapy, according to Kite.

“Today’s FDA approval brings that hope to more patients by enabling the power of CAR T-cell therapy to be used earlier in the treatment journey,” said Christi Shaw, chief executive officer of Kite. “This milestone has been years in the making.”

Initially diagnosed with a bleeding disorder in August 2013 that led to a months-long hospital stay and the discovery of lymphoma, Dumler entered the clinical trial of CAR T-cell therapy in July 2015.

At the time, she was three months through her six-month life expectancy. Her body was weak and several pounds underweight from the chemotherapy.

The clinical trial took five minutes, and Dumler was monitored for nine days with some difficult side effects, including a high heart rate, low blood pressure and some cognitive issues.

However, a scan one month later showed no signs of cancer.

This year, Dumler celebrates seven years of being cancer-free. And today, she continues to share her story with other patients who need encouragement and options.

“Everything I was doing at the moment, I had no idea the significance of it, other than that I wanted to be alive for my children, and looking back, I know I’m a trailblazer,” Dumler said. “I never thought I would be a person who had a significant role that feels so important, but really, I’ve been able to talk to so many patients now who’ve gone through it or are getting ready to go through that same treatment, and just give them my personal experience, give them encouragement, answer their questions. I understand now why I’m still here.”