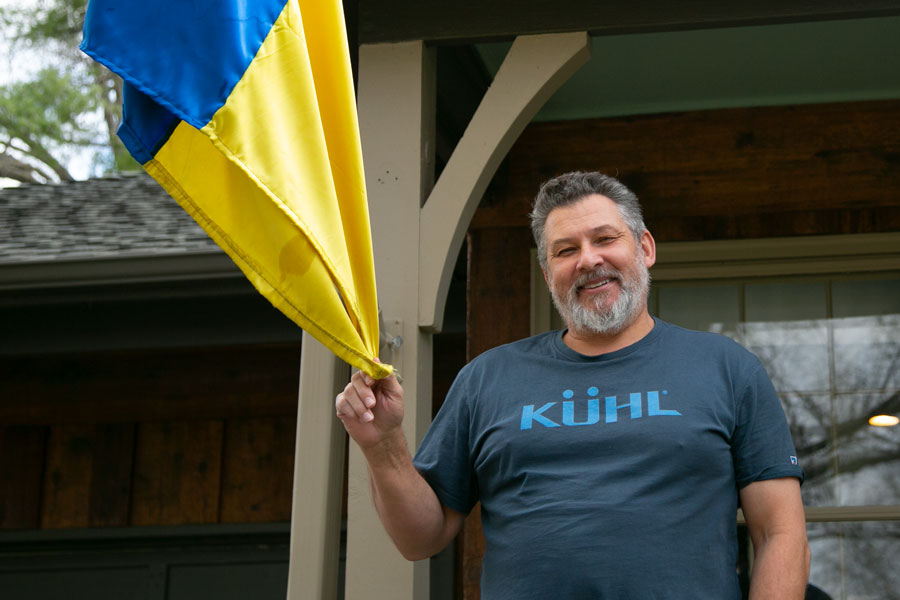 Tony Short, a Prairie Village resident, felt helpless when seeing the news about the Russian invasion of Ukraine. He knew he wanted to do something, and decided to remind people of what's going on by hanging Ukrainian flags along Tomahawk Road in Prairie Village. Photo credit Juliana Garcia.

Why it matters: The Russian invasion of Ukraine, which started in late February, is ongoing. Reuters reports the civilian death toll reached nearly 1,200 as of March 27.

The effort: Short said the more he heard about the invasion of Ukraine, he felt helpless. Prairie Village’s sister city is Dolyna, Ukraine, and Short said this made his desire to help that much more urgent.

He decided to take action into his own hands and show support by hanging flags on oak trees along Tomahawk Road between Nall Avenue and 79th Street. Short said oak trees symbolize strength, and the idea is to keep the flags high up on the trees to deter vandals.

Short’s goal: As a first-generation German immigrant, Short said, the goal of this act of support is to serve as a reminder for the city, neighbors and passersby about what’s going on overseas. He said he thinks it’s especially important for young people to pay attention to the invasion.

Key quote: “I hope that people when they look at this are going, ‘Ok, we’re going to take a stand, we’re going to let this leader know this is not acceptable,’” Short said. “I may not be able to do a lot, but it’s not acceptable. You can’t do this. That’s my goal, certainly, is to help people understand that part.”