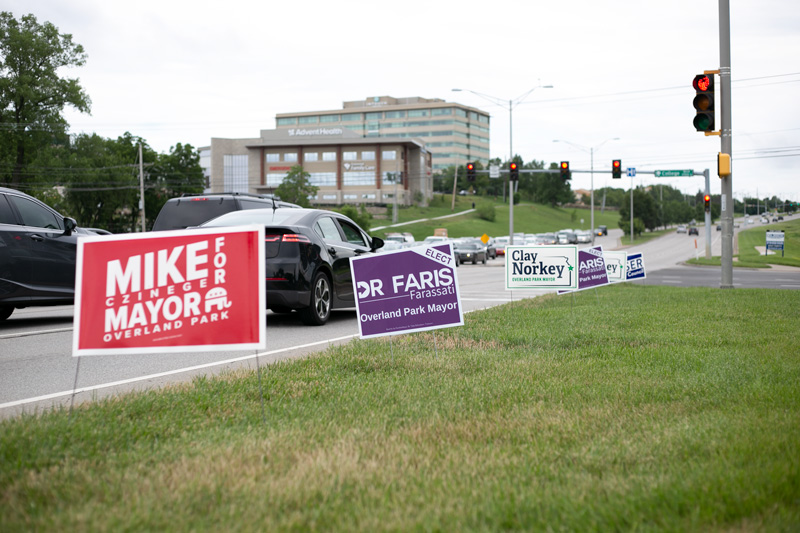 The Kansas Governmental Ethics Commission ruled recently that the citizen-led group Fresh Vision OP needs to register as a political action committee after it encouraged others to vote for city councilmember Faris Farassati during last August's mayoral primary, in which Farassati ended up placing third behind Mike Czinege and eventual winner Curt Skoog. Above, campaign signs ahead of last August's primary. File image.

To residents concerned about development of the Overland Park Arboretum and toll lanes on U.S. Highway 69, Fresh Vision OP was simply “a bunch of neighbors” trying to voice their views, according to Chengny Thao, the group’s treasurer.

But the group, formed a little more than a year ago, crossed a line in campaign disclosure law when it published an endorsement of one-time mayoral candidate Faris Farassati shortly before last August’s primary, a state election watchdog panel has ruled.

Now, Fresh Vision OP has a month to file papers registering itself as a political action committee and disclose its donors.

‘We are a community organization’

Board members of the Kansas Governmental Ethics Commission lauded the passion of members of the group at its March 23 meeting and encouraged them to continue their community involvement.

Nonetheless, spending money on mailers and a website endorsement for Farassati defines them as a PAC under Kansas law, they agreed.

Fresh Vision OP was registered with the Secretary of State in February, 2021 as a 501c4 “social welfare” not-for-profit group.

Thao and James Muir, the group’s president, told ethics commissioners they organized as a way to express their concerns about a number of issues, including development of the arboretum, chip seal road resurfacing, tax incentives and toll express lanes on U.S. Highway 69.

The group was focused on those “quality of life” issues, not particular candidates, Thao said.

“For us it’s more about ensuring that our neighbors and ourselves have a strong quality of life,” he said.

Thao and Muir argued that their group was a far cry from political action committees that raise tens of thousands of dollars for candidates.

Muir said the primary purpose of the group was to inform neighbors, often at meetings in Thao’s house, and encourage them to be involved in the issues.

Gail Radke, one neighbor near the arboretum, spoke in support of the group. Fresh Vision OP was set up as a source of information for neighbors, she said.

“We are a community organization,” she said.

He said a website and a mailer which read, “Vote for Dr. Faris Farassati for Mayor,” crossed the line into advocacy, as defined by Kansas statute.

The fact that the organization spent money on those items suggested that advocacy for a candidate was a major purpose of the group, therefore making it a PAC under the law, he said.

Thao and Muir said the group froze its operations when they got the notice that the ethics commission was investigating. They said they would comply in filling out the forms after which the group would be “shut down.”

The commission voted unanimously to allow Fresh Vision OP 30 days to do its paperwork.

Some commissioners said they admired the group’s spirit of community involvement.

“I would encourage them – and I do believe the evidence indicates that they are a PAC – that they simply file as a PAC, not dissolve, but go full steam ahead,” said Commissioner Kyle Krull. “They were very passionate about this issue. They got involved. Where they stepped over the line was they found a champion.”

Commissioner Nick Hale said filing as a PAC ensures the group will follow state standards of transparency and accountability.