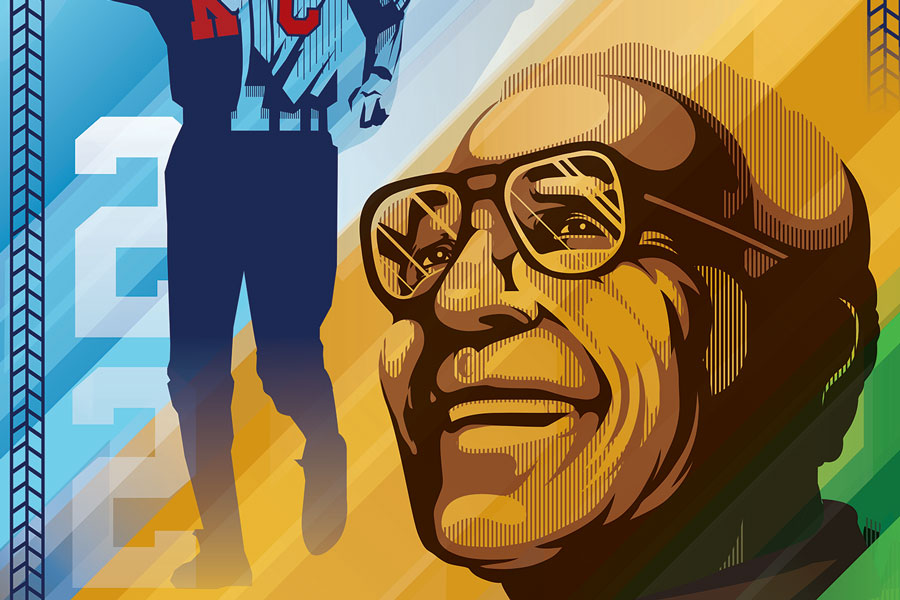 "Tip of the Cap," a metrowide art tour honoring Kansas City legend Buck O'Neil, kicked off on Tuesday at Hy-Vee in Prairie Village. Kansas City artist Phil "Sike Style" Shafer created this commemorative piece for the tour in homage to O'Neil. The piece will be auctioned of on July 24, the day O'Neil is posthumously inducted into the Major. League Baseball Hall of Fame. Image via Hy-Vee website.

Why it matters: O’Neil is set to be inducted into the Major League Baseball Hall of Fame in Cooperstown, New York, this summer.

“Tip of the Cap” is meant to honor his legacy ahead of his induction in July. Hy-Vee and the Negro Leagues Baseball Museum in Kansas City commissioned local artist Phil “Sike Style” Shafer to create a piece reflective of O’Neil’s “life, legacy and impact.”

The commissioned piece created by Shafer will tour several Hy-Vees in the metro and will be auctioned off on the day of O’Neil’s induction on July 24.

Shafer also developed a line of O’Neill merchandise for the tour. A portion of the proceeds from the merchandise will go toward the NLBM. Hy-Vee will donate the winning bid amount to NLBM, as well.

Background: Originally passed over for induction in February 2006, O’Neil was voted into the Hall of Fame in December — 15 years after his death, according to NLBM.

O’Neil played for and managed the Kansas City Monarchs from 1938 to 1955, on teams that included baseball legends Jackie Robinson and Satchel Paige.

He went on to become Major League Baseball’s first Black coach in 1962 with the Chicago Cubs.

He earned a new level of prominence in the early 1990s as a featured commentator on Ken Burns’s PBS documentary series “Baseball.”

The Kansas City Royals’ Buck O’Neil Legacy Seat still honors one fan per game with a special recognition and the seat behind home plate at Kauffman Stadium where O’Neil often sat later in life.

The details: The “Tip of the Cap” tour will feature a replica of Shafer’s commemorative O’Neil artwork at a different Hy-Vee in the metro each week until the induction on July 24.

The tour schedule is as follows:

Those interested in submitting a bid for the commemorative piece can do so online here until July 24.

Key quote: “Buck O’Neil touched so many lives with his warm personality and his connection to everybody through his stories,” Shafer said. “I’m really honored to be able to say I met him personally several times.”