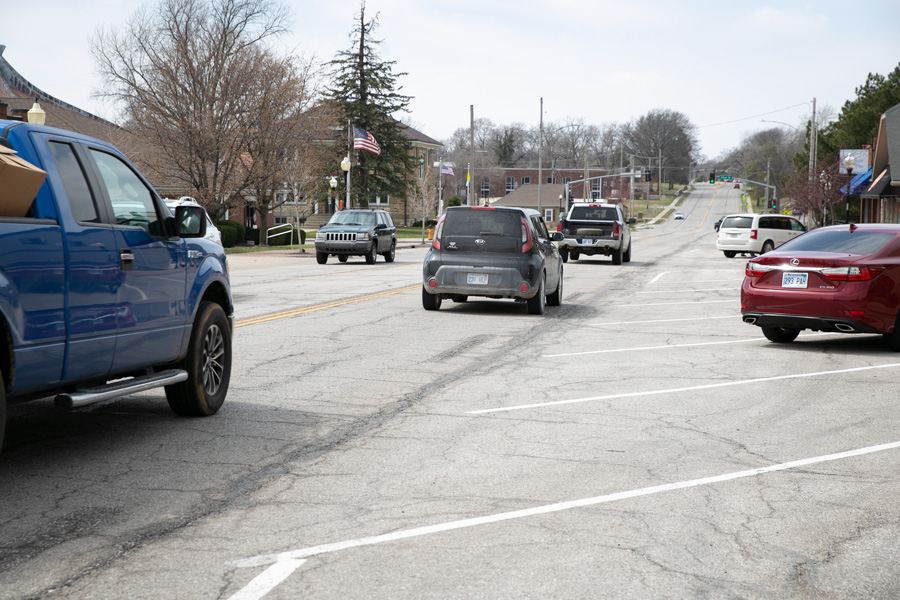 Shawnee is planning to end its lane-reduction project on Johnson Drive through downtown, but will explore ways to increase pedestrian safety. Photo credit Leah Wankum.

Johnson Drive through downtown Shawnee is going back to four lanes, but Shawnee city leaders are still exploring ways to increase pedestrian safety and make the area a walkable destination.

Why it matters: Beginning in November 2021, a pilot project re-striped Johnson Drive between Flint and Goddard streets, reducing the busy road’s lanes from four to three.

It was a temporary, low-cost way to see if fewer lanes would reduce traffic speeds, improve pedestrian safety and emphasize the downtown core as a destination.

The project also modified parallel parking to angled parking off Johnson and temporarily added about 20 public parking spaces on the corridor.

The city is now set to end that lane-reduction pilot program.

The Shawnee City Council on Monday reviewed the pilot program, receiving a mixed bag of feedback about the reduced lanes.

Following the conclusion of the pilot, the city plans to:

Some city leaders also expressed interest in reducing the speed limit from 30 to 25 miles per hour on Johnson Drive through downtown.

Two business owners, Mike McVey of Transport Brewery and Chris Calkins of Aztec Theater, both shared their support for any efforts the city can make to increase public parking and improve pedestrian safety for their customers.

Below is a review comparing statistics from before and during the pilot project:

Here is a comprehensive list of potential solutions from city staff:

Key quote: “I do believe it’s a dangerous situation and like I said, I don’t know which direction the council wants to go, but it can’t stay what it was before we tried to calm this area.” – Mayor Michelle Distler

The Shawnee Downtown Partnership requested the city delay any decisions on Johnson Drive to May, when the school year ends.

Regardless of any potential changes, Johnson Drive is slated for road resurfacing in late May.

A recording of the meeting is below and on the city’s website. Discussion begins at 5:26:08.