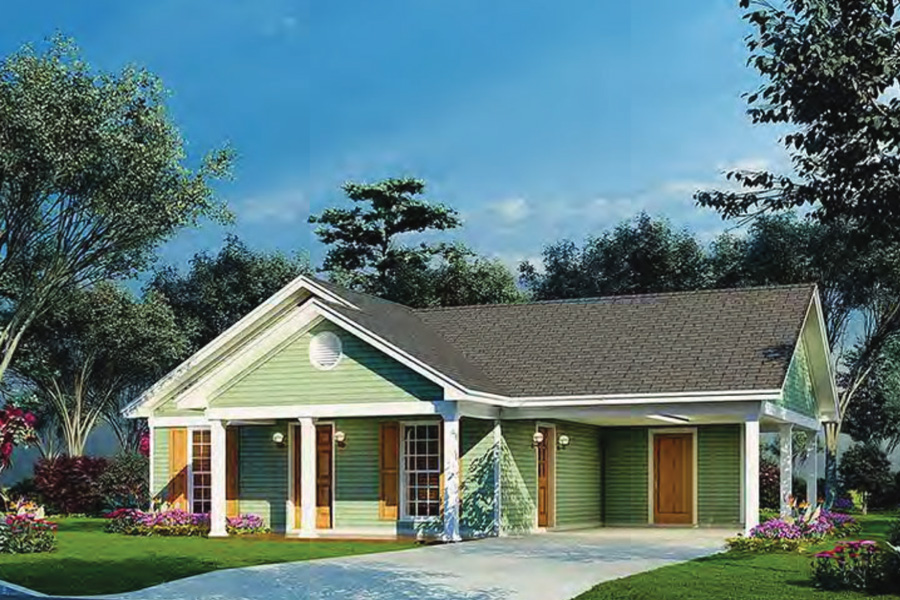 More than 20 neighboring residents have signed a valid protest petition objecting to the proposed rezoning a three-acre site north of downtown Shawnee. Developer Kevin Tubbesing has proposed the Loma Gardens project consisting of 14 single-family homes on the site. Above, a rendering of one of Loma Garden's prospective homes. Image via Shawnee city documents.

Neighboring homeowners to a proposed single-family subdivision just north of downtown Shawnee have rallied a second time in protest against development on the site.

Located at 5527 Nieman Road, the Loma Gardens development would comprise 14 single-family homes on about three acres.

The proposed lots are smaller than those in the surrounding residential area, with shorter setbacks from the street that would connect onto Nieman just south of West 55th Street. The proposal to have smaller lots on the site prompted opposition from some neighbors.

Residents who live near the project have gathered the signatures of at least 20 other neighboring property owners, objecting to the proposed rezoning.

Why rezone — and how a protest petition works

The Loma Gardens development faces a valid protest petition, which means it must reach a higher threshold of approval from the Shawnee City Council, a two-thirds majority vote instead of a mere simple majority.

The council is set to take up the project at its regularly scheduled meeting Monday.

The rezoning process allows neighboring residents to submit a valid protest petition if they object to a proposed rezoning.

In this case, the city’s comprehensive plan for future land use has earmarked the site for higher residential density, which means the proposed Loma Gardens project requires rezoning to a density higher than the current single-family residential.

That is what some neighboring homeowners do not want.

The three acres for the proposed Loma Gardens site currently have one house built around 1938 and a detached garage, both of which would remain on site under the current proposal.

Neighbors behind petition offered to buy lots on site

Tubbesing withdrew his application for Stag’s Garden in November 2021 when it became clear the city council also did not support the townhomes idea.

Since then, he has brought forward a reworked plan focused on single-family residences.

Email records Tubbesing shared with the Post show that two neighboring homeowners made offers to purchase from him one-acre lots on the three-acre site in February.

Both those homeowners, Meena Davidson and Cierra Knight, have helped lead both protest petition drives over the past year.

The lots’ current owners also confirmed that Davidson and Knight shared their interest in buying the property from them as well.

Knight and Davidson said they asked Tubbesing to reconfigure the site to larger lots in order to lower the density. They said they would have supported the Loma Gardens project if the zoning had remained single-family residential.

For his part, Tubbesing expressed frustration that the two have used the city’s petition process to halt his project after he rejected their offers to buy the land.

“Every project that I bring to the city, I’m trying to make my hometown a better place,” Tubbesing said. “And it really gets under my skin when people do unethical things like this to block development for their own selfish self-interest.”

When asked if they told the other neighbors who signed the petition that they had made offers on the land, Knight and Davidson did not give a direct response.

However, the two women said they told their neighbors that “there would have been interest” from their families about “having land” on the property if the project had remained standard single-family residential.

Below is a full statement Davidson and Knight provided to the Post:

“Regarding personal communication with the developer regarding lots, both of our families are ultimately interested in maintaining appropriate zoning for this area of Shawnee and our neighborhood, all while supporting growth in Shawnee. We communicated to the developer that we were supportive of him and supportive of him developing but that us and other residents felt very strongly about maintaining R-1 [single-family residential] zoning. In doing so, we expressed our own interest in possibly purchasing larger lots. This shows that larger lots were marketable and, if achieved, these larger lots would have overrode the overlay zoning, creating lower density throughout the development. Unfortunately, the developer was not interested in this arrangement and, therefore, the discussion moves back to what is best for the neighborhood, which we are expressing via the rezoning petition.”

The Shawnee City Council is set to take up rezoning for the Loma Gardens development at its meeting Monday, March 28.

Editors Note: The original version of this story has been modified to reflect the specific price at which Davidson and Knight say they offered to buy the lots from Tubbesing.