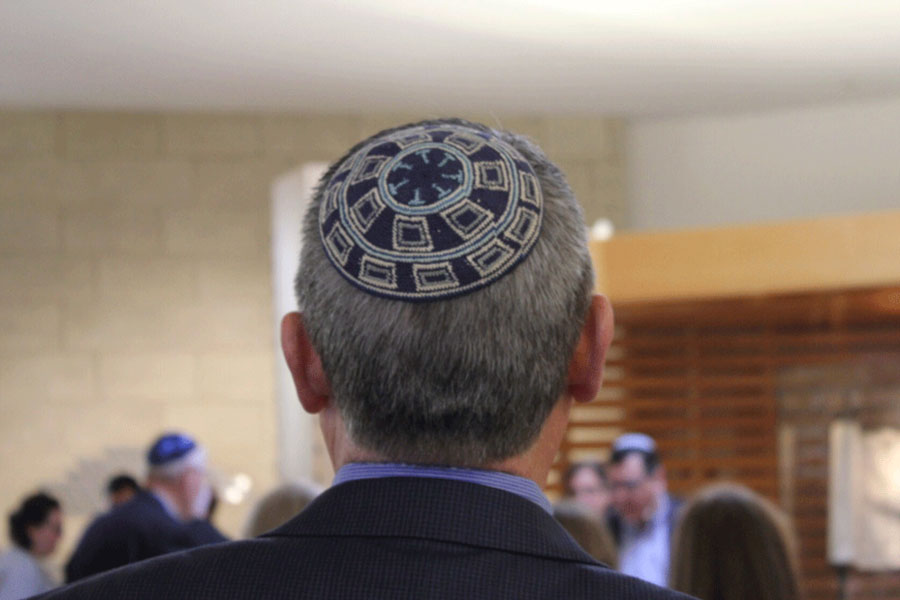 A new report from the Jewish Federation of Kansas City shows most Jews in the metro say antisemitism is a problem in the U.S., though a much lower percentage say that's the case in the Kansas City area. The survey also documented the local Jewish communities demographic characteristics, finding nearly a quarter of adults worried they did not have enough money for retirement. Above, a service at Congregation Beth Torah in Overland Park. Photo credit Kyle Palmer.

A 2021 report by the Jewish Federation of Kansas City was released earlier this month, the first of its kind in the last 35 years.

The report set out to create a comprehensive portrait of the size, characteristics, attitudes and behaviors of the Jewish community in Kansas City and the surrounding area.

Conducted between April and June 2021, the results from the Kansas City Jewish Community Study are based on answers from 989 Jewish households across the metro.

Cross was later convicted of capital murder in 2015 and sentenced to death for his hate crimes, but died in prison from natural causes in May 2021.

Now, the Jewish Federation is working to highlight the diversity in Kansas City’s Jewish community with its report.

Here are some of its findings.

Antisemitism is a concern

A total of 75% of Jewish people in Kansas City surveyed in the report said they “are very concerned” about antisemitism in the U.S.

However, they are less concerned about it in the greater Kansas City area, with 44% of those surveyed responding with the same answer in regards to antisemitism the metro.

In turn, 9% of Jewish adults polled in the survey reported having personally been a victim of antisemitism within the past year.

Of the survey’s respondents who said they experienced antisemitic attacks or insults, one was categorized as “intense” after a neighbor attempted to run over a respondent and their family with his car.

Another 10 incidents were categorized as “moderate,” involving either workplace discrimination, vandalism or harassment in person or over social media.

The remaining 35 incidents were labeled as “mild,” consisting of microaggressions, insults and instances of stereotyping.

Prior to the release of the Jewish Federation’s report, the American Jewish Committee released a similar report in October, surveying the Jewish community across the country.

The report found that nearly 1 in 4 Jews in the U.S. had experienced antisemitism within the previous year.

AJC CEO David Harris said in a statement following the release of the report that the survey results “should alarm all Americans.”

“This critical report confirms that American Jews are deeply concerned about antisemitism in America—and many are limiting their behavior as a result,” the statement reads. “Now is the time for American society to stand up and say ‘enough is enough.

“American Jews see antisemitism on the far right and the far left, among extremists acting in the name of Islam, and elsewhere throughout America. It is 2021, and a disturbing number of Jews in America are afraid of identifying openly as Jewish for fear of attack.”

Income and standard of living

The survey found the metro’s Jewish community is relatively affluent compared to the surrounding population, but there is a significant portion that is struggling financially.

“For our purposes, we define struggling as the folks who cannot make ends meet or just managing to make ends meet,” said Matthew Boxer, an assistant research professor at the Cohen Center for Modern Jewish Studies.

Roughly 1 in 4 Jewish households in the metro fall under this “struggling” category, according to the survey.

Additionally, only 22% of adults 41 and older said they were not confident they would have enough money for retirement.

“All of these numbers are much lower than they would have been if we asked the same questions of the general population in the Kansas City area, and, yet, anything above zero is higher than you want it to be,” Boxer said.

Health issues in the community

Another statistic reported by the study found roughly 1 in 4 Jewish households include at least one person who is limited in their daily routine due to some sort of health issue, special need or disability.

“By far, the most commonly occurring health issues in the community are chronic illnesses, physical disabilities and mental or emotional health problems,” Boxer said.

Disproportionately occurring in the older population, chronic illness affects 16% of Jewish households in Kansas City, while 14% are affected by physical disability.

Twelve percent of those surveyed also were afflicted by a mental or emotional health problems.

Boxer said while the study has showed that “the COVID-19 pandemic has affected the health of older people much more seriously.” He said “from a mental health perspective, COVID has had its biggest impact on younger people.”