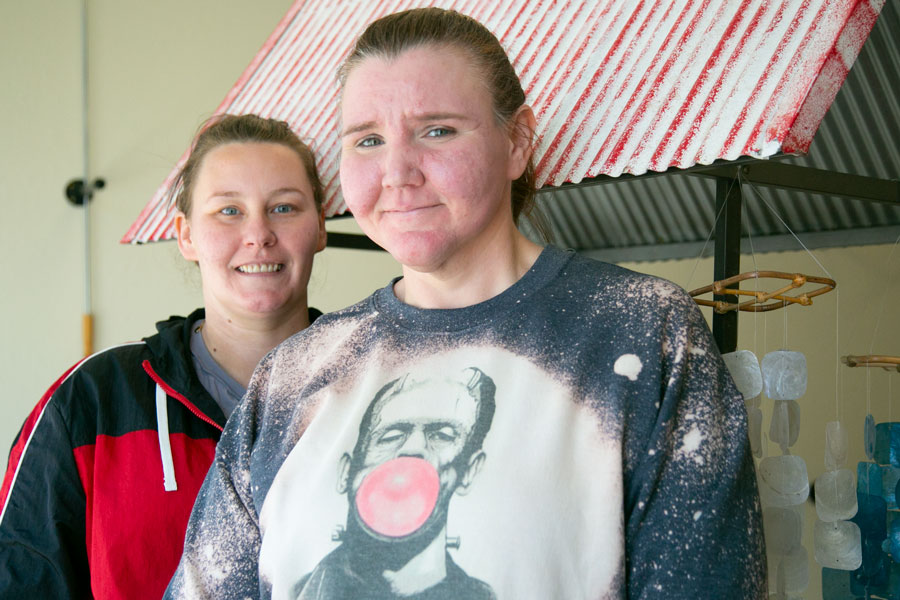 The Sunflower Market, a modern take on a general store, is opening in downtown Merriam on March 26. Owner Sarah Orozco, right, and manager Maegan Standridge, left, plan to partner with local vendors and nearby businesses to bring more foot traffic to the historic area. Photo credit Juliana Garcia.

When Sarah Orozco lost her mother in 2014, she turned to a childhood pastime she and her mom enjoyed together: crafting.

At first, she played around with painting furniture and making bath bombs before landing on T-shirt design and production.

She turned that hobby into a business, The Sunflower Market, which she has run out of her backyard she-shed since 2016.

Orozco and manager Maegan Standridge have participated in pop-up markets across the Kansas City metro in recent years.

Orozco said she knew it was time to finally find a brick-and-mortar storefront when customers kept asking where she was located — and even started showing up in her driveway looking for the store.

Now, she and Standridge are opening The Sunflower Market at 5847 Merriam Drive, in the space formerly occupied by Total Comfort Heating and Cooling.

“I’ve been thinking about opening a store for probably the last two or three years,” Orozco said. “I always drove by here and thought, I kind of like this area, but nothing ever opened up down here until December.”

Orozco and Standridge are bringing local creators with them that they met during pop-ups.

The Sunflower Market will stock a little bit of everything, Standridge said, from apparel and home decor to body products and gift items. They liken it to a “modern general store.”

One corner of The Sunflower Market will be modeled after an old-fashioned general store, featuring teas, coffees, candies and confectioneries, Standridge said.

The duo plans to host one or two events a month and work with other local businesses to remind people what downtown Merriam has to offer. This includes Blondie’s Corner Club Bar and Grill creating a specialty sunflower drink the day of the market’s grand opening and finding ways to partner with farmers market vendors, Orozco said.

“We all have one goal: to bring more people down to this area,” Orozco said. “I think a lot of people miss it or don’t know about it, especially if they’re new to the Kansas City area. Hopefully, we can get a lot more foot traffic if we all work together.”

The Sunflower Market’s grand opening is on March 26 from 8 a.m to 5 p.m., and it will feature food trucks from Taco Via and Doleicious.