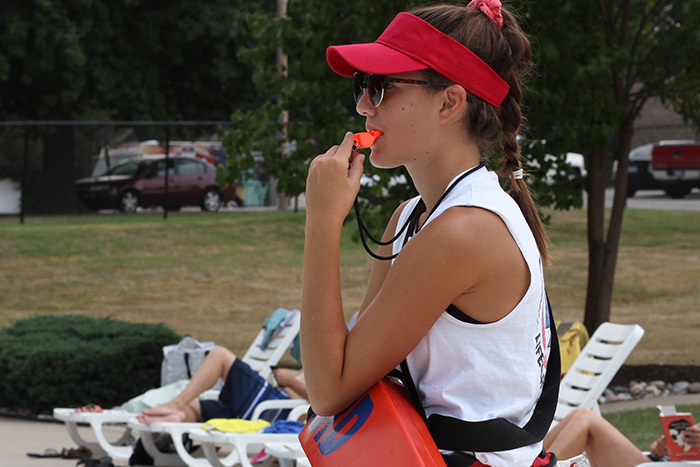 Some city aquatics departments in Johnson County are still feeling the impacts of last summer's lifeguard shortage, while others have implemented measures to work around it. File image.

Pool operations across Johnson County could once again look different this summer due to some cities’ ongoing shortage of lifeguards.

At the same time, some other cities that experience lifeguard shortfalls last summer have been boosting pay in an effort to avoid that situation again.

Following limited operations in both 2020 due to the COVID-19 pandemic, some local municipalities — including Roeland Park, Prairie Village and Shawnee — adjusted summer pool hours in 2021 because of lifeguard shortages and other pandemic-related limitations.

This summer, some cities say they are still struggling to fully staff pools, while others are on track to have enough staff with adjusted pool operations, extended time for applicants increases in pay rates.

Here’s how aquatics look across the country so far.

The city of Overland Park announced a current shortage of lifeguards for this summer’s pool operations.

If the city doesn’t fill 225 lifeguard positions by the upcoming season, some outdoor pools could remain closed for the summer. As of last week, the city said it had fewer than half the applicants need to fully staff all its pools.

The starting pay for Overland Park lifeguards is $13 per hour, which is a three-dollar increase from last summer.

“We are working to get as many lifeguard positions as we can between now and Memorial Day weekend to fill as many positions as we possibly can,” said aquatics director Renee Reis.

Shawnee is also reportedly short on lifeguards as of last week.

Aquatics Superintendent Sean Keenan said the city has had to get “aggressive with hiring” this year, as the city and other communities are still feeling the effects of last year’s shortage.

The city currently has 50 lifeguards and needs roughly 80 in order for pools to be fully staffed.

As such, Keenan said the city increased pool staff wages and are also offering $100 referral bonuses for lifeguard positions.

Starting wages for lifeguards have gone up from $11 to $13, and Keenan said they could also extend the hiring process if needed.

“My target date was always April 1,” he said. “Last year, I was hiring into the first week of June after pools had opened. So I hope to not be in that situation, but if we were, we would do what we need to do.”

Aquatics director Ryan Wiebe said he does not anticipate Lenexa will come up short in terms of lifeguards this season.

He said the city’s four pools currently have roughly 110 lifeguards on the staffing list. Three of those pools are outdoors.

“We run several classes throughout the year to train individuals that want to become lifeguards and be employed by the city of Lenexa and Parks and Rec,” he said. “We look to have many return from previous summers because they really enjoy working with the city of Lenexa in our four facilities. We promote from within and that brings them back.”

After struggling with lifeguard shortages last year, City Clerk Meghan Buum said the city is currently on track to open the city’s pools at full capacity this summer.

“We’ve put in a variety of measures to kind of aide that process,” she said. “We feel really lucky. Our pool managers have been working hard to recruit lifeguards since December, so it’s no small feat.”

Some of those measures include moving the required age down from 16 to 15 and raising the hourly wage from $10 to $12.

Given that Merriam’s pools are open all year, aquatics supervisor Cole Surber said the city is starting the summer season with a good base of lifeguards from the city’s indoor pools.

He said it may still be difficult to hire the additional 15 or 20 lifeguards needed for this summer, but he ultimately does not anticipate any differences in pool operations.

“I think everybody’s struggling,” he said. “We’re competing with other facilities, other places like grocery stores and fast food restaurants that can afford to pay people more an hour. So that’s the battle that we’re constantly fighting.”

Assistant City Administrator Emily Randall said Mission is seeing a lot of retention of lifeguards from last summer so far.

The city has also implemented scheduling changes, such as offering early afternoon or “moonlight” programs, to add creativity and flexibility to the schedule.

“Scheduling and activities in general were so tricky last year,” she said. “We’re just not seeing that this time, and it feels like everybody’s ready to get back.”