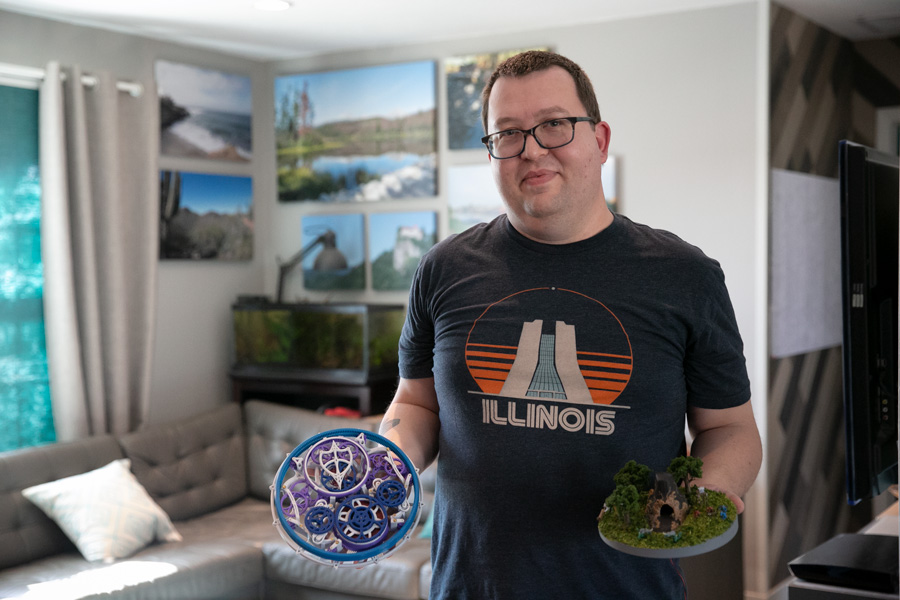 In the home office of Lenexa software engineer Chris Sammis, tiny figurines and dioramas he 3D printed for himself are on display. He manufactured them for display and tabletop gameplay for Dungeons and Dragons. Photo credit Leah Wankum.

Stepping into Chris Sammis’s Lenexa home office is like turning into a giant.

Cleverly placed around the room, on wall shelves and a desk, are dozens of tiny figurines, many of them easily recognizable for even the casual gamer.

Sammis, a software engineer by trade, makes these little creatures — from dragons and warriors to entire diorama scenes — in his free time with a 3D printer.

All of them can be held in your hand. Most of them barely surpass the size of your fists clasped together.

What started out as dabbling in 3D printing and design has evolved over several years into something much more sophisticated: A well developed hobby that satisfies Sammis’s desire for creative expression and skill.

Besides, the energy and focus he needs to complete each diorama and figurine, he says, has also helped take his mind off the past couple of years, which have been hard on almost everyone because of the COVID-19 pandemic.

“It’s a creative outlet for myself,” Sammis said. “I get the satisfaction of seeing something that I have made. The printer makes the physical object, but I get satisfaction from the fact that I manufactured it, that I painted it.”

How he does it

Tucked into a tiny corner of his home office is the machine itself.

The 3D printer hums quietly, making hardly noticeable movements as it plugs away for hours churning out Sammis’s creations that he programs

Sammis believes his work as a software engineer at Garmin plays a bit into why he enjoys his hobby so much.

Many of his figurines and creatures measure just over the size of a quarter and are often placed on a slightly larger display for him to enjoy.

In fact, he has frequently crafted the tiny figurines for gameplay in Dungeons and Dragons, a tabletop roleplaying game of fantasy and adventure that he has enjoyed playing for years.

“As 3D printing technology matured and I got into it as a hobby probably about five years ago, all of a sudden, I was able to combine the hobbies,” Sammis said. “I could start making my own landscape stuff for games that I was involved in, and making my own little figures.”

As for his latest project, Sammis just put the finishing touches on the most complex tiny diorama he’s ever built, depicting a scene from the video game The Legend of Zelda: Breath of the Wild.

“It was released several years ago, but it’s a wonderful game; my wife introduced me to the series long ago,” Sammis said. “I was just replaying it, and I felt like I wanted to get creative with it and use my 3D printers and the tools that I have and what skills I have in whatever quantity I have them, and just make something.”

Sammis gave a shoutout to local shop TableTop Game and Hobby in Overland Park for selling the supplies and materials to keep up his hobby, as well as his wife, Courtney Sammis, who supports his work.

As far as 3D printing projects go, it’ll probably stay a hobby for him, mostly because he wants to keep enjoying the creative process without the hassle of turning it into merchandise.

“I really don’t have an endgame for a lot of the things that I do as a hobby,” Sammis said. “I think the creation is its own reward for me.”