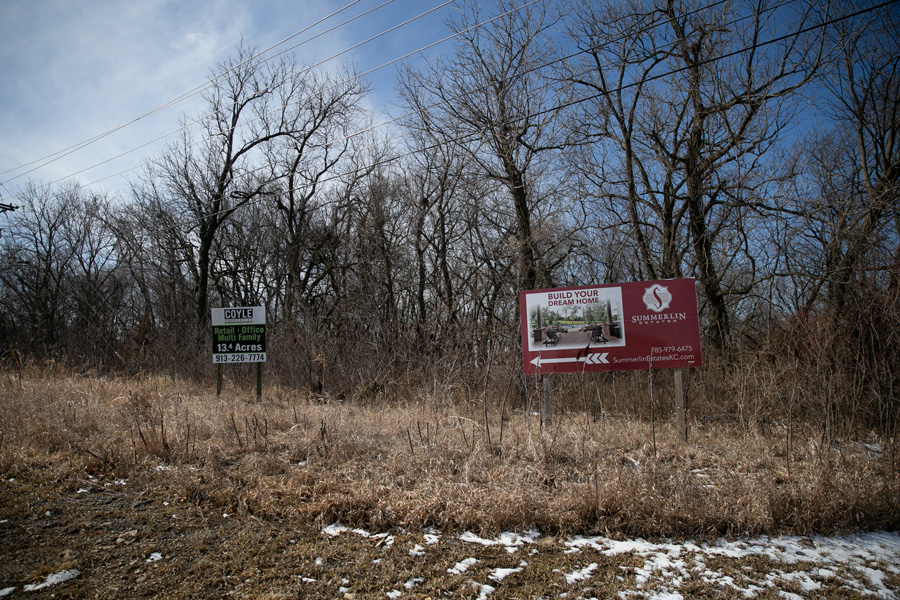 Shawnee has advanced plans for a townhome project on 13 acres near Shawnee Golf & Country Club. Above, a view of the wooded area. Photo credit Leah Wankum.

Why it matters: Located on about 13 acres in the 6700 block of Hedge Lane Terrace, Hidden Creek Reserve Townhomes comprises a proposed preliminary development plan with 60 residential units in 16 attached townhome buildings.

Planned by developer DI LLC, the townhomes would be available for rent at upwards of $2,000 per unit.

Units range in size from 2,100 to 2300 square feet, with attached one- and two-car garages and a basement.

Here’s a design example for a four-plex townhome:

Hours after hearing public comment and discussion with the civil engineer, the Shawnee Planning Commission voted 5-3 to approve a preliminary development plan and rezoning the site from agricultural to planned unit development mixed residential.

Some of their opposition centered on concerns that the townhomes are out of place next to the higher-end single-family homes in the surrounding neighborhood near K-7 and Shawnee Mission Parkway and that the project could exacerbate traffic congestion in the area.

Below is a site layout: 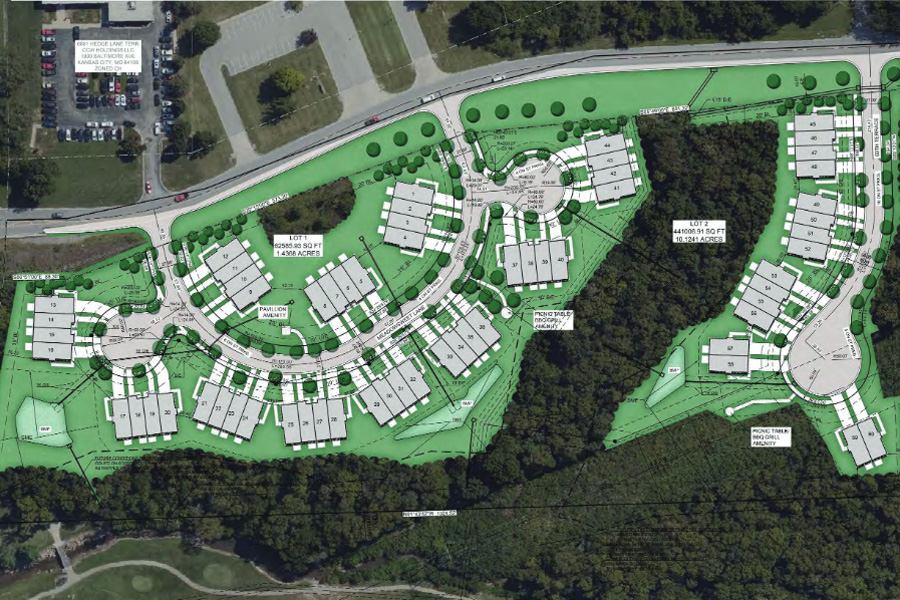 Commissioners Bruce Bienhoff and Jeff Fox were absent. The commission has one ongoing absence, too, after John Montgomery resigned his position.

Opposition from those who spoke at the meeting — most of whom live in the Greens of Chapel Creek next to the golf course — centered around concerns that the townhome development will impact their property values, worsen traffic congestion and safety issues and disrupt the wooded nature and quiet neighborhood.

Dan Foster with Schlagel & Associates, the civil engineer, pushed back, saying that future renters’ goals of safe, peaceful neighborhoods with full-grown trees and no traffic congestion are the same as those of the homeowners.

Key quote: “I really do empathize with all the residents and what they said today. I’ve lived in my house for 25 years … but I’m also a firm believer in property rights, as well. Not that they should infringe on each other. And we’ve taken the time today to hear from the developer, from his representative, from our own engineers, from the staff that did not get this last week. The planning commission has taken a lot of time tonight listening to all sides of this, and just to be clear, our role is only one peg in the process.” – Commissioner Kathy Peterson

Next steps: The full Shawnee City Council is slated to consider the plans Monday, March 28.

The project also requires final city approvals before it moves forward. Some commissioners asked the city staff to take another look at potential traffic issues with review of a final development plan.

A recording of the meeting is below and on the city’s website. Discussion begins at 1:57:10.