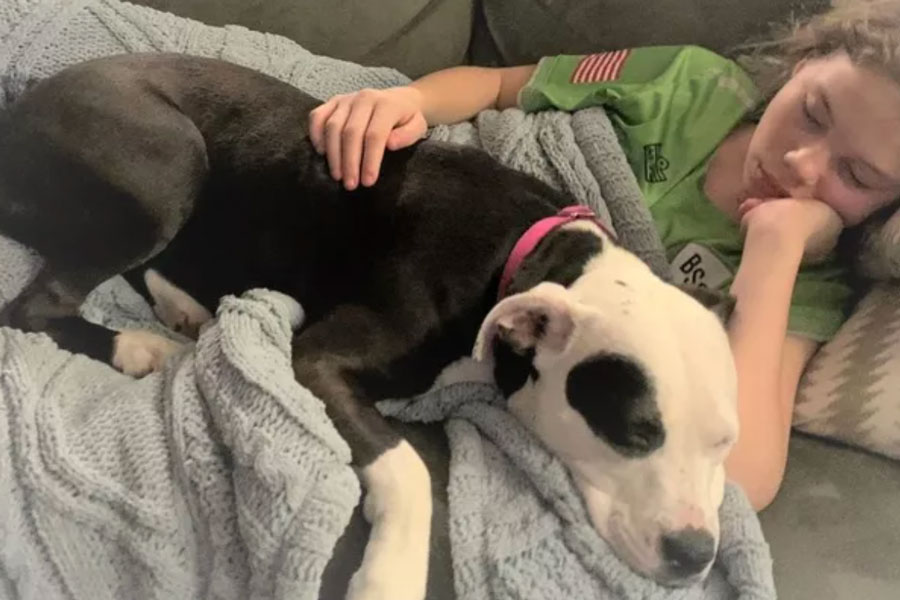 Leawood resident Kristi Bond had to move her dog Lucy, above with Bond's daughter Esmae, to another city after officials told her Lucy violated Leawood's ban on pit bulls. When the Bonds adopted Lucy, they were told she was a boxer mix, but Leawood's pit bull ban covers dogs that resemble pit bulls, which Bond's lawyers argued can be a vague designation. Image via Bond's GoFundMe page.

Leawood’s ordinance banning pit bulls, which is believed to be the last in Johnson County, has been ruled unconstitutionally vague by a judge.

Johnson County District Judge Thomas Sutherland has decided in favor of Leawood resident Kristi Bond’s appeal to bring her dog, Lucy, back to the family home.

Lucy, five years old and now blind, had been living in another city since September of 2020 while Bond’s case was pending.

When Bond was charged in Leawood Municipal Court with keeping a “dangerous animal,” Leawood and Overland Park were believed to be the last two major cities in the county and among only a few in the metro still banning pit bulls. Overland Park has since rescinded its ban.

Bond said she is pleased with the outcome, but the months since officers sought to remove her dog have been traumatic and financially draining.

“In the end, reason and logic prevailed, but at a psychological and financial cost no citizen should ever have to face this based on the assumption of breed,” when the dog had done nothing wrong, she wrote in a message to the Post.

The experience, she said, has been, “nothing short of a living nightmare for my family the last two years.”

Besides splitting up Lucy from Bond and her 12-year-old daughter, legal fees prompted her to start a GoFundMe page to help with costs. Bond said the legal costs have totaled in the tens of thousands of dollars.

Lucy was not accused of being vicious or of attacking anyone. But like many pit bull bans that were passed in recent decades, Leawood’s ordinance did not allow residents to keep dogs that even resembled mixes of several breeds of bull dogs, bull terriers or other dogs that had similar looks, regardless of good behavior.

Bond’s attorneys, Katie Barnett and Adam Hall argued that no dog breed is inherently dangerous and that it is not possible to reliably determine a dog’s breed by its looks.

Sutherland ruled that the city had not shown that there were policies in place to prevent arbitrary enforcement by police and animal control officers.

He also noted the city did not present evidence to support its rationale for having the ordinance, a fact he found, “truly puzzling.”

Even if Leawood officials believed the law would protect its citizens, Sutherland said it may have been based on outdated suspicions about the breeds from decades ago, when pit bulls were considered more dangerous than other dog breeds.

Popular attitudes have shifted over the years, and advocates for the dogs have said evidence does not support these widespread public fears.

Bond said the experience has uprooted a family member, Lucy, during the appeal, and she faulted the city for pursuing the ban while other cities were dropping theirs.

“It’s ridiculous that the city wasted all this time and taxpayer money to justify its efforts to try to take away a sweet, furry family member that had done nothing wrong,” she said.

“This is a prime example of wasteful and unresponsive government – and Mayor [Peggy] Dunn and the city council need to be held accountable for their fiscal irresponsibility, and lack of attention and response to this issue,” Bond said. “We remain hopeful that the City of Leawood will take this opportunity to update their antiquated dog laws generally and have begun the process of outreach to that end through our Ward 1 Councilman, Andrew Osman.”

“Public safety is enhanced when animal laws target behavior, not appearance,” she said.

Leawood’s ordinance remains on the books for now while the city considers its options, City Attorney Patty Bennett said.

However, some wording of the ordinance has since been changed to specify that the features set forth by the American Kennel Club and the United Kennel Club Breed Standard for American Pit Bulls would be used to identify a pit bull in the existing ordinance.

As for Lucy, Bond confirmed that she has been moved back home to Leawood.

Roxie Hammill is a freelance journalist who frequently reports for the Post and other publications in the Kansas City area. You can reach her at roxieham@gmail.com.