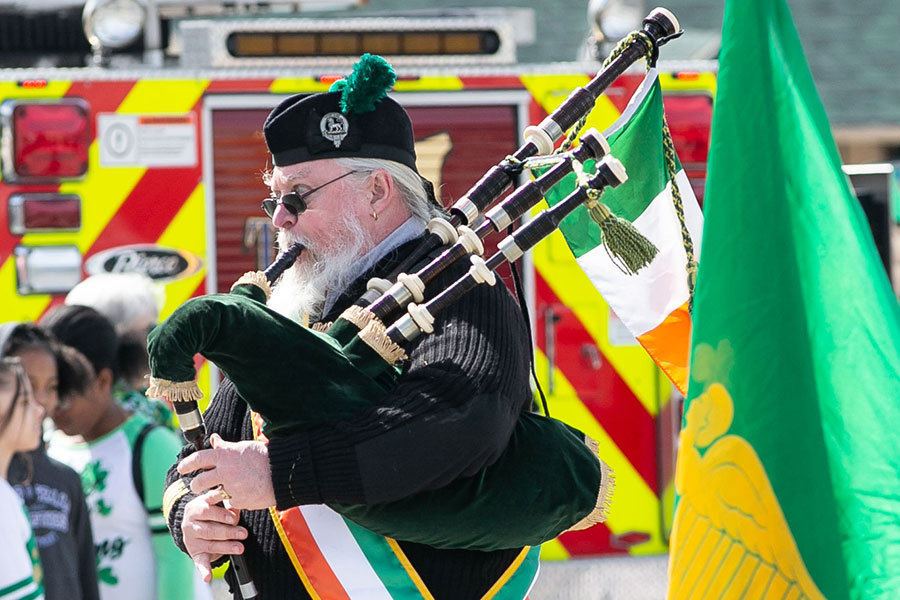 After two years of being canceled during the COVID-19 pandemic, the St. Patrick's Day Parade returns to downtown Shawnee. Above, an image from a past parade. File photo.

For the first time in three years, the St. Patrick’s Parade in Shawnee is back.

After being canceled in 2020 and 2021 due to the COVID-19 pandemic, the parade will return this month for its 38th appearance through downtown Shawnee.

• The parade will go down Johnson Drive through downtown with an awards ceremony afterwards at the Aztec Theater.

• Parade organizers will give out the first-ever Donna Sawyer Theme Spirit Award in honor of long-time civic activist Donna Sawyer, who died last year of cancer.

This year’s comeback event in Shawnee is scheduled for Sunday March 13. The theme is “What’s Your Irish Super Power?”

Those who’d like to join the parade can bring this completed form with the $10 entry fee to the parade day line up.

Maureen Kronawitter, treasurer of the Irish American Club, said she and her fellow club members are excited to bring the parade back this year.

She recalled that the St. Patrick’s Parade in 2020 was one of the first major large events to get canceled at the start of the pandemic nearly two years ago.

“We had everything ready, all set to go, all the hard work was done, and it got shut down,” Kronawitter said. “And then of course in 2021 we couldn’t have it again. So we are very excited to get it back this year. We’re basically just pretending like the last two years didn’t happen.”

What’s happening at the parade

The parade will follow the same route as years past, starting at 1 p.m. at Monrovia and Johnson Drive and going east on Johnson to Nieman Road.

However, the judging stand has moved from its former location near Splash Cove and the Knights of Columbus to right in front of City Hall, across from the Aztec Theater.

The awards ceremony will take place immediately after the parade at the Aztec. Performing at the ceremony, which is open to the public, are Eddie Delahunt, a local Irish-American musician, and the Driscoll School of Irish Dance.

The annual Duck Race put on by the Shawnee Sister Cities also returns, with a start time at 4:30 p.m. in the parking lot of Shawnee Town Hall (11600 Johnson Drive). Details here.

As part of the festivities, the club is also co-hosting a movie night with the Aztec Theater on Wednesday, March 9, with a showing of classic Irish film “The Quiet Man.” Ticket information is here.

New among the prize entries is the Donna Sawyer Theme Spirit Award for $500.

Funded by Janine Storella-Linnell, owner of Shawnee bar and grill Jake’s Place, the award honors the spirit and volunteerism of the late Donna Sawyer, a long-time Shawnee volunteer who was presiding over the club when she who died last year from cancer.

“Janine wanted to do that for Donna, in Donna’s name, because the parade and everything with the Irish Club was very important to Donna,” Kronawitter said. “We are hoping then to keep it going and have different sponsors help with that monetary donation to cover that.”

Half of parade entry fees support the club, and the club will donate the other half to nonprofit Sunflower House. The parade is weather-dependent, but Kronawitter said they hope to have 40 or 50 parade entries.

“And again, we’ve been gone for two years, so maybe a lot more people will want to get involved this year, get out and have some fun,” she added. “We just want everybody to come out and have a good time with us.”