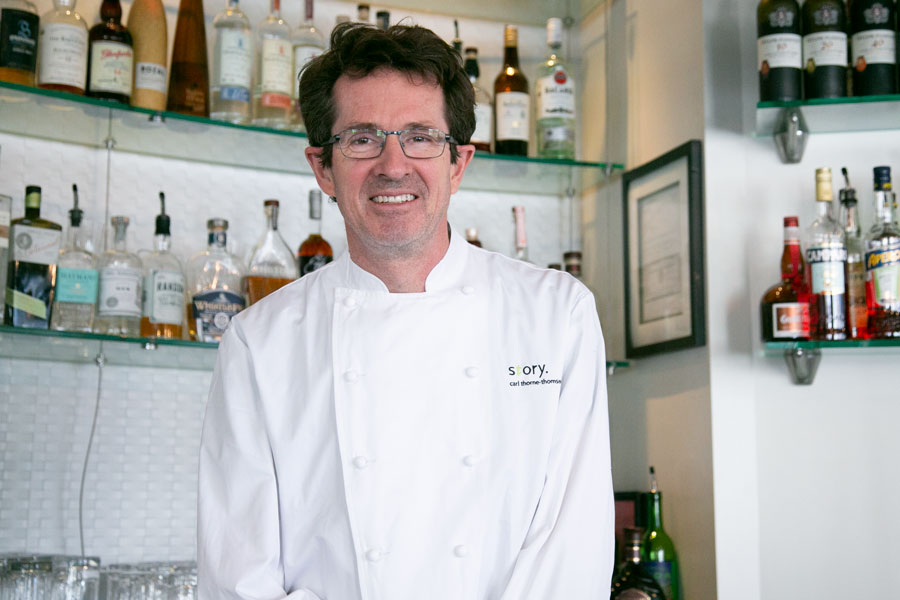 Chef Carl Thorne-Thomsen of Prairie Village's Story is a James Beard Foundation Best Chef: Midwest semifinalist. Thorne-Thomsen is the only chef in the state and in the Kansas City metro who is a 2022 semifinalist in this category.

Carl Thorne-Thomsen, chef and owner of Story. in the Shops of Prairie Village, is once again a finalist for a James Beard award, often referred to as the “Oscars of food.”

Why it matters: This is the second time in less than 10 years that Thorne-Thomsen is a semifinalist for the James Beard Foundation Best Chef: Midwest award.

The first time he landed a nomination was in 2013, just two years after he and his wife Susan opened Story.

Thorne-Thomsen is the only chef in the Kansas City metro — and the state of Kansas — who is a semifinalist for Best Chef: Midwest 2022. (The owners of Yoli Tortilleria in Kansas City, Missouri, are semifinalists in the “Outstanding Bakery” category.)

The only other Johnson County chef to be a JBF Best Chef: Midwest semifinalist in recent years is Linda Duerr, according to Beard awards archives.

Key quote: “When I travel and I go to a city, I’ll frequently go to the James Beard nominations list and look for restaurants to eat at because they’re similar to what I do,” Thorne-Thomsen said after expressing his gratitude for being a semifinalist. “They’re locally-owned, they’re chef-owners, they’re people who really care about what they do and they’re really putting what they have into it — and you’re going to get a good experience.”

How nominations work: The Beard Foundation conducts an open call for recommendations for several awards categories, including Best Chef, according to the foundation’s frequently asked questions.

Nominees must meet criteria including setting high standards of culinary skill and leadership, and working as a chef in the region for at least three years.

Thorne-Thomsen said he does not know who nominated him for Best Chef: Midwest 2022.

How voting works: First, a voting body is put together for each award category.

For Best Chef, this includes two types of judges: Scouts, who find restaurants and chefs for consideration, and tasting panelists, who taste and score all nominees based on criteria, according to JBF’s restaurant and chefs awards fact sheet.

The voting body also includes the restaurant and chefs awards subcommittee, which is made up of individuals like critics, restaurateurs, food studies scholars or former chefs.

The subcommittee and tasting panelists will receive a judging form used to score their experiences as they visit restaurants in their assigned region. Finalists will be announced in mid-March, and an awards ceremony for winners will be held in Chicago this June.

Whether or not he moves forward in the Best Chef: Midwest category, Thorne-Thomsen said, nothing will change at Story.

He said chefs might feel a little more pressure to live up to expectations after winning a James Beard award, but at the end of the day, the goal is still to provide a quality dining experience.