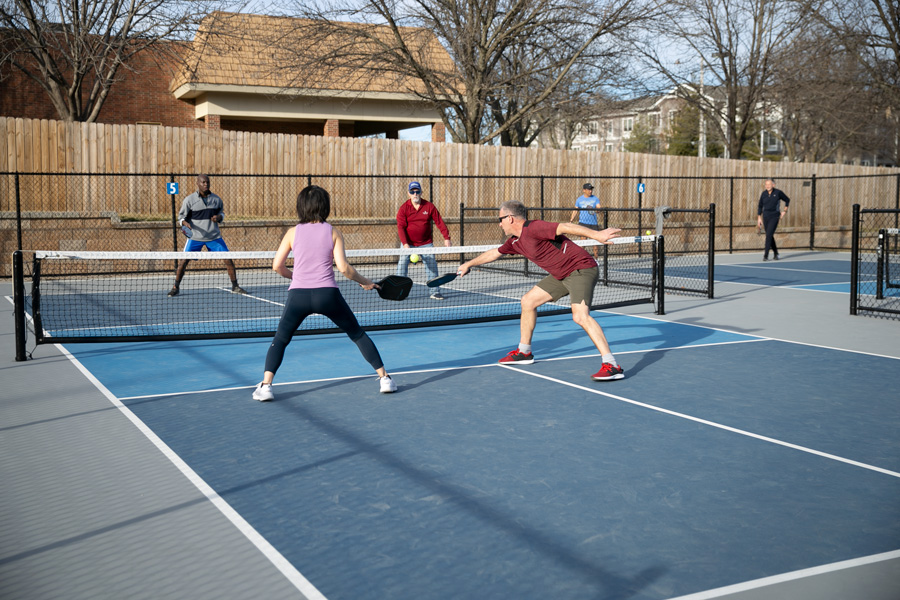 Lenexa is highlighting a program to help pickleball players keep organized and in the rotation for available court space. Above, players enjoy a game in the fresh late February air Monday afternoon at Bois D'Arc Park in Lenexa. Photo credit Leah Wankum.

With the overwhelming demand for pickleball court time and new players joining the sport every day, Lenexa city officials are highlighting a system for allowing teams and individuals to reserve courts.

It’s affectionately called the “paddle saddle,” a curved plastic device with ten numbered slots hanging on the exterior fencing of pickleball courts around the city.

It works like this: put your paddle in a slot in order of your arrival, denoting who’s next in line for the next available court.

“We get a lot of questions about it; some people don’t quite understand how to use it,” said Parks and Recreation Director Logan Wagler. “Believe it or not, we get new pickleball players all the time.

“It’s just this growing sport, more people are trying to learn about it and get involved. If you’ve never been to a court, you’ve never played much, you’ve never seen a saddle like this, you don’t really understand how it works. So this is just an education effort for people to understand how the paddle saddle works.”

Players place their paddle in the next available slot from left to right, and then progress their paddles leftward along the slider as teams come off the court.

After players finish a game, they can exit the court and place their paddles in the next available slots so they can stay in the rotation.

“It’s great; keeps things organized, keeps things moving,” said a pickleball player named Marc during a pickup game Monday afternoon at Bois D’Arc Park. “There’s not much question about whose turn is next.”

The paddle saddle is not new. In fact, they’ve been in use since shortly after the city began adding pickleball courts in 2018. But with new players coming to public courts frequently, the city felt the need for a primer on how it works.

“As soon as we opened, we were overwhelmed with usage,” Wagler said. “So for us, we saw an opportunity or a need, rather, to address and try to help get themselves organized, especially the outdoor facilities.

“When you’ve got 60 pickleball players and only eight courts, you’ve got 12 people, at least, waiting for a court, so how do we do that in an organized way? That’s what this program basically does.”

“This is what makes this game so incredible; it’s always a rotation, so nobody just sits and waits for hours,” said pickleball player and Lenexa resident Chris Soper. “You might wait for five minutes or 10 minutes for a court to come, and everybody can rotate out, you can play with new players and meet new people and just build community.”