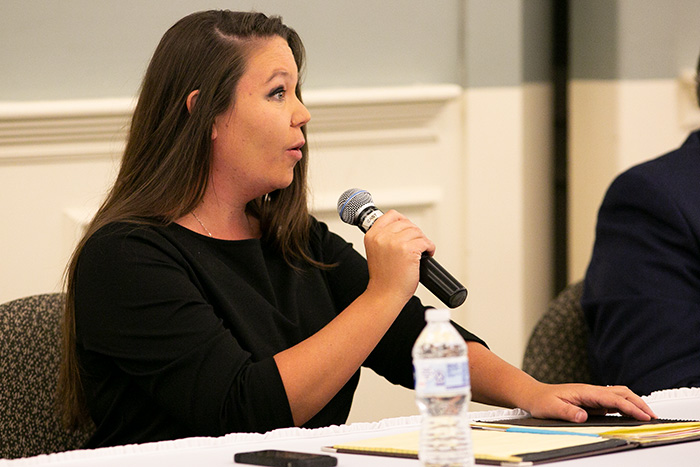 "If we follow the logic that all material that raises a concern be censored, there will be nothing left for our children to read. Or, worse, our children’s education will be controlled by whatever political party currently holds power. That sounds too much like the Soviet Union I feared as a child," Rep. Stephanie Clayton writes in this week's Capitol Update column.

The views expressed in each Capitol Update are solely those of the lawmaker writing the column and are not reflective of the Post’s position on any matter discussed.

Like many of you, I grew up in the Shawnee Mission district during the Cold War. I was afraid of dying in a nuclear attack, and would look at the cinderblock walls, imagining them being blasted into rubble in a blinding flash of light that would end us all, or, worse, leave us dying slowly and horrifically in the nuclear winter that followed, or, occupied by a cold military regime that forced us into silence and obedience. (Any kid who grew up watching “The Day After” or “Red Dawn” can relate).

My teachers taught me to be proud of my country, where you could say as you pleased, and where voices of dissent were not silenced by an oppressive government.

Our country was, and is, the best country on earth, because, while messy and complicated, we are free to disagree and free to express who we are and what we believe.

My education in Shawnee Mission public schools was exceptional, and because I want my children to have the best, I stayed here to raise them. And, they do have the best. I know this, because we parents have full, unrestricted access to their top-notch curriculum through Canvas, a platform with which we parents became well-versed during Covidian times.

The transparency is staggering, and I have access to more information than I have time to peruse.

Which is perhaps why I am confused by rhetoric that calls for increased transparency, when, in reality, this call is an unwanted incursion into our children’s education by special interests who seek to silence free thought and dissent.

Substitute for House Bill 2662 would allow any resident of the school district (not just parents), to raise objection with materials, and for those materials to be flagged and removed from the curriculum.

This seems fine on the surface, but the question is, which materials? Which parent’s concerns will take precedence? I read both Toni Morrison and Ayn Rand as part of my curriculum in high school here in the Shawnee Mission School District. Parents on both sides of the political spectrum take exception to what both authors write.

All parents deserve our compassion and respect, and should never be subjected to mockery, or disrespect. But, if we follow the logic that all material that raises a concern be censored, there will be nothing left for our children to read. Or, worse, our children’s education will be controlled by whatever political party currently holds power. That sounds too much like the Soviet Union I feared as a child.

Shawnee Mission parents are resilient. We learned how to work with teachers to get our kids through COVID, and, through unprecedented educational transparency, have unfettered access to the curriculum that our children are taught. Special interest groups are seeking to dumb down our children by censoring their learning material, even removing the same diversity education that corporate America demands of their workers, which will leave our children powerless and unable to compete in our global economy.

Fortunately, we are too smart to fall for censorship wrapped in a veneer of false transparency. And we know that if we give our children the freedom to learn and to be the very best, our country will continue to be the very best.

We were taught that freedom of speech and expression is what makes our country the best country on earth. And we will continue in that fight for freedom for the generations to come by standing strong against those who wish to put control of curriculum in the hands of those who seek to censor.

I work for you! You can email me at email me at stephanie.clayton@house.ks.gov, find me on the web at www.Clayton4ks.com or follow me on twitter @sscjocoks.