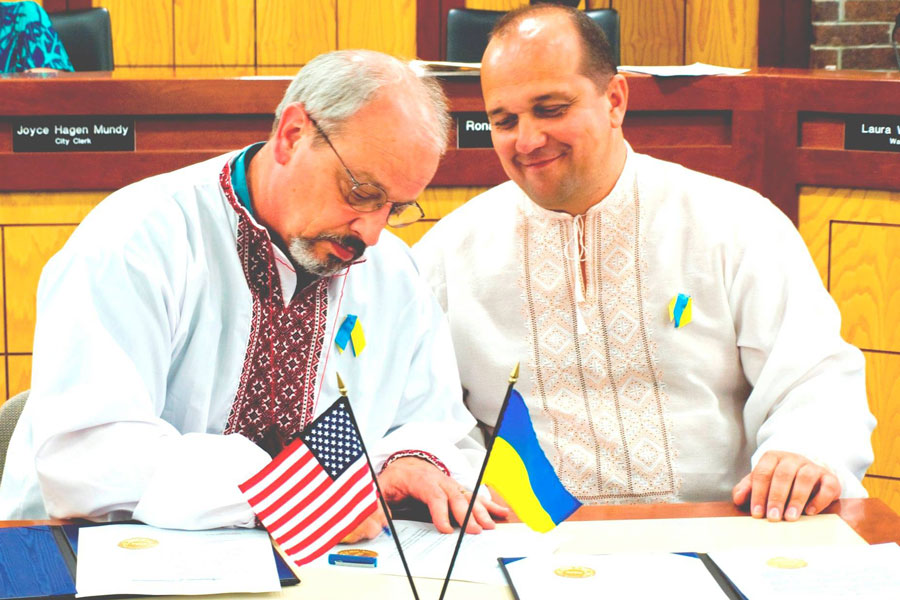 The ongoing invasion of Ukraine isn’t a distant concern for some Johnson Countians.

Prairie Village’s sister city is Dolyna, located in the Ivano-Frankivsk oblast, or district, in the western part of the country, which has been under attack over the past 24 hours, according to news reports.

• Dolyna, Prairie Village’s sister city since the 2000s, is located in a region of Ukraine that has reported explosions since the invasion began.

Prairie Village Mayor Eric Mikkelson tweeted Thursday that the city’s thoughts and prayers are with their sister city and other residents of Ukraine.

“Our thoughts and prayers are with Prairie Village’s friends and family in the Ukraine, including democratically-elected Ukrainian local officials in this delegation we hosted a few years ago, and all residents of our sister city in Dolyna, Ukraine,” Mikkelson wrote.

Our thoughts and prayers are with Prairie Village’s friends and family in the Ukraine, including democratically-elected Ukrainian local officials in this delegation we hosted a few years ago, and all residents of our sister city in Dolyna, Ukraine.https://t.co/STpYbVSLzF pic.twitter.com/a4m6lXFQKy

City Administrator Wes Jordan told the Post via email that there has not been active communication between the two cities for some time.

Jordan said he tried to reach out in the last year, “but it would appear the communication barrier posed problems with establishing a reconnection.”

Michael Kelly, who was a Prairie Village councilmember from 2006 to 2014, played a key role in securing a sister city relationship with Dolyna and visited the Ukrainian city several times.

Kelly said as a councilmember he met the ex-director of what is now Global Ties KC, a nonprofit for citizen diplomacy, and expressed interest in forming a sister city relationship.

Kelly said he was introduced to a man from Dolyna who was interested in working with Prairie Village. After an initial trip to Dolyna with resident Cleo Simmonds, Kelly said, the pair knew it had found Prairie Village’s sister city.

“The aspiration of Ukrainians is no different than the aspirations of the people of Prairie Village or Johnson County or the state of Kansas or the United States: To pursue life in peace and freedom and in the best interests of loved ones and friends,” Kelly said.

A group from Dolyna, including former mayor Volodymyr Harazd, came to Prairie Village for about a week and made the sister city agreement official.

Shaffer, along with about a dozen others, visited Dolyna in 2009 for several days. Shaffer said the group toured the Ukrainian countryside, and Dolyna threw them a parade.

Dolyna took care of Prairie Village city officials and residents, Shaffer said, and the group “had a good time.”

Shaffer said he’s disappointed and fearful about the ongoing invasion of Ukraine.

“Once you visit a place like that you never forget it, and I’m sure I would look at it a little differently if that hadn’t occurred, but that’s the benefit of being able to travel like that,” Shaffer said. “I learned and I’ll never forget it.”

‘Not going to go down without a fight’

Cindy Dwigans, a former member of the Prairie Village sister city committee who also went on the 2009 trip, said she’s still in contact with people in Dolyna.

“Our friends have been posting saying, ‘Stay strong’ and, ‘We’re not going to let this happen,’” Dwigans said. “We’re just posting our support.”

Kelly, who now lives in Lisbon, Portugal, said he lived in Ukraine’s capital Kyiv for about six months after moving to Europe in 2015.

He said he’s talked to his friends in Dolyna and Kyiv who say they “are ready to fight and die for their country.”

Kelly said from what his friends say, there is an emboldened spirit among Ukrainians who are “not going to go down without a fight.”

Harazd, who died more than a year ago from COVID-19, once talked to Kelly about the “exciting future for Ukraine as a part of Europe and the free western world,” Kelly said.

“Make no mistake, modern Ukraine is not just an eastern European nation — it is a European nation,” Kelly said. “A large part of the population has come of age with freedom and democracy as the ideal and the norm.”

The city of Prairie Village released the following statement on social media Thursday regarding the invasion of Ukraine:

“Our hearts are heavy, and our thoughts are with the people of Ukraine. For several years, Prairie Village has celebrated a Sister City relationship with Dolyna, Ukraine. We’ve welcomed delegations of visitors and sent Prairie Village representatives to Dolyna to share and learn about education, culture, government, and commerce.”

Prairie Village identified the International Red Cross and United Help Ukraine as two opportunities for people to offer assistance at this time.