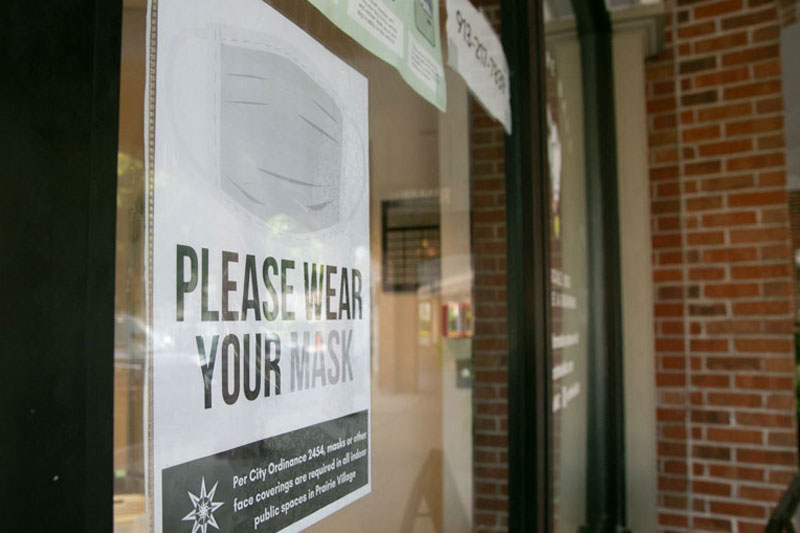 The city of Prairie Village is lifting its mask mandate 15 days early on March 1 as COVID-19 positivity rates continue to decline. Additionally, the city will return to hybrid meetings. File image.

The city council on Tuesday night voted unanimously to end the city’s current mask order on Tuesday, March 1, which will be 15 days ahead of its original expiration date.

The city council on Tuesday also approved a return to hybrid meetings for all city business, including city council and committee meetings. That vote was also unanimous. Councilmember Inga Selders was absent.

The city adopted its most recent mask order in January, as new cases rose sharply amid the Omicron variant surge.

The city council then approved a 30-day extension to that mask mandate earlier this month — even as COVID-19 positivity rates in the county had begun declining.

On Tuesday, the council voted to end that order early.

Mayor Eric Mikkelson said Tuesday that he is proud of how the city has handled COVID-19 for nearly two years now, including being the first city to implement its own mask mandate in August 2021.

With COVID-19 positivity rates continuing to decrease, Mikkelson said he thinks now is the right time to rescind the mandate.

Still, Mikkelson said he and county health officials believe the mandate sparked by the Omicron variant made a difference.

“We flattened the curve and we probably saved some lives by the action we took,” Mikkelson said.

Councilmembers echoed the mayor’s comments and were in agreement that it was time to end the order.

If there is another variant spike, though, Herring said he is prepared to support another mask mandate.

Prairie Village’s decision will leave Roeland Park as the only city in Johnson County with a mask mandate in place after March 1.

The Roeland Park City Council on Monday opted to leave its current order in place through March 16.

Last week, the city of Mission also voted to lift its mask mandate early. That city’s order is set to expire Wednesday.

Meanwhile, other mask rules are also being rolled back.