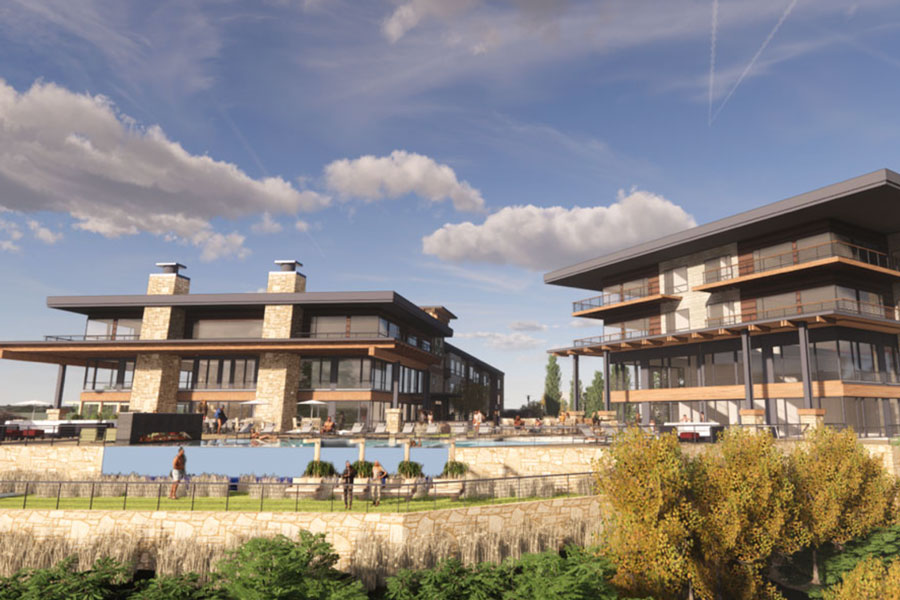 After hours of public comment and debate Monday night, the Overland Park City Council early Tuesday morning voted to deny a rezoning request, special use permit and development plan for a proposed $65 million apartment complex next to the Deer Creek Golf Club at 133rd and Metcalf.

The city council’s move Monday comes despite the planing commission’s recommendation to approve the project over growing opposition from some neighboring residents.

The vote short-circuits a plan that developers have said is the only viable way to preserve Deer Creek Golf Club.

Developer and golf course owner GreatLIFE KC proposed a four-building apartment complex with 220 apartments across roughly 11 acres of land on the southwest corner of the club, two blocks north of 135th Street.

According to the plans, roughly 2.5% of the club’s existing acreage would be used for the new apartments.

The buildings would be two to five stories tall. The development also comes with 459 parking spaces.

Following initial review by the Planning Commission, the developer altered the plan to accommodate city and resident concerns.

Some of those updates included moving the development’s courtyard further north from nearby single-family homes, breaking the largest building in two and eliminating the entrance and exit along 133rd Street.

“There’s high demand for this this specific type of development,” Bradley said. “It’s obviously a great location. Being located on a golf course and having that green space, you know, it’s going to be a really attractive and in-demand lifestyle offering that we’re going to create here.”

Project applicant representative Bob Johnson told the council that stream bank repairs and preservation of the golf course would also be part of the plan.

“(The owners) want to preserve the golf course by making beneficial use out of the portion of their property developed with golf facilities today,” he said. “There is no question that preservation of the golf course is a greater benefit to the community at large than the opposite.”

Residents for and against

Some residents expressed enthusiasm for the project, urging the council to approve it.

Resident Jim Hicks said he has watched the golf course deteriorate in recent years, and he was not sure what would happen to it if the project didn’t move forward.

“I have no doubt that it would be absolutely unsustainable financially to continue the golf course without a solution,” Hicks said.

Resident Mary Kauffman said she has noticed fallen trees and erosion problems on recent walks along Tomahawk Creek, which runs through the course and continues under Metcalf.

She said the restoration of the creek and the golf course were her main reasons for supporting the project, along with the walkability it would provide for residents.

“I fear that if the plan is not approved, if the golf course goes out of existence and the state of the creek continues to degrade, that the surrounding property values will be negatively impacted,” she said.

But a larger group of residents spoke in opposition to the project, including several who voiced concerns about it at previous meetings.

Resident Jeff Coppaken said he and his family chose to live at Deer Creek, in part, for the beauty of the surrounding neighborhood.

Aspects of this project would take away from that, he argued. He pointed out the potential view of apartment windows from across the pond as an example, calling it an unwanted “fishbowl effect.”

“If we zoom in, I think I could see what they’re watching on TV,” he said.

Resident Michelle Reinig voiced concerns about the traffic impacts, saying that new residents and new entertainment and shopping venues have already increased traffic in the area.

“Increased traffic around the elementary and middle school and our neighborhood amenities is one of our greatest concerns, as kids walk to and from school and to our pool and sports courts,” she said.

Where the council landed

Following that discussion, the council split on whether to move forward with the plan or rebuff it.

Councilmember Melissa Cheatem said her support of the project came from jer trust in the city’s planning staff, but she did struggle with whether this would fit into the character of the neighborhood or harm nearby properties.

“I looked at this property as really a crossroads between the commercial on the surrounding three corners and the large single-family homes,” she said. “And I felt that high-quality residential that was shorter than the existing commercial on the site was appropriate.”

Councilmember Scott Mosher said the property is zoned the way it is in the city’s master plan for a reason, and it was the city’s job to remain consistent with that.

“Our master plan said to the homeowners of Deer Creek that when you bought here, that it was (single-family residential),” he said. “I think we have an obligation as a city council to honor our word and stand on that.”

Councilmember Jeff Cox said the city had “twisted themselves into a pretzel” to justify the building of the complex.

Ultimately, he said, the neighboring communities did not want the project to proceed and the city council should listen to that consensus.

“We should care a lot about doing harm to people next door to developments,” he said. “In my opinion, the fact that this (proposal) is before us, coming from the Planning Commission and our planning department, tells me that the process is broken.”