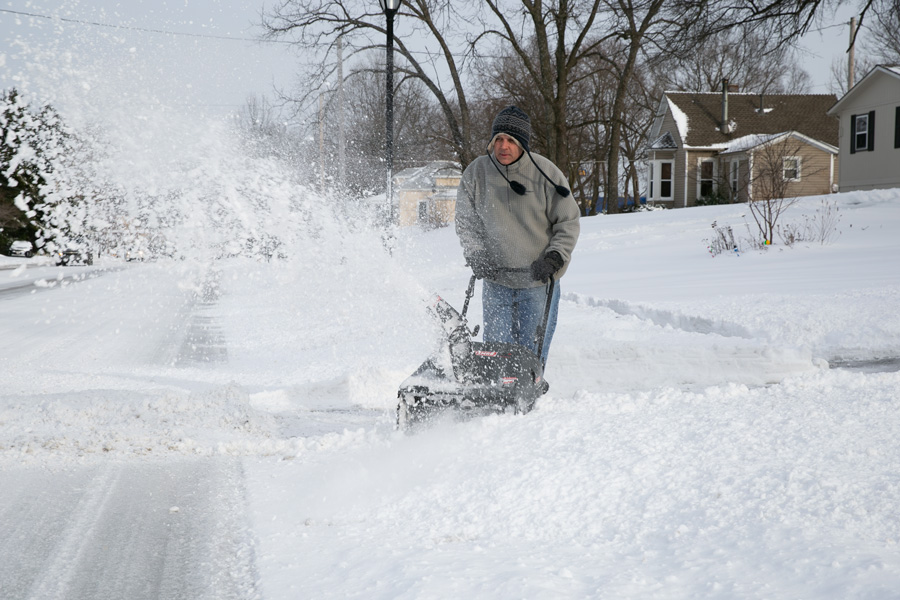 Snow on Thursday broke single-day records for the Kansas City area, with some parts of Johnson County reporting upwards of 10 inches of snow. Above, a snow blower hard at work in Shawnee. Photo credit Leah Wankum.

As predicted, the Kansas City area saw an impressive amount of snow Thursday. In fact, it was record-breaking.

Starting the day with a steady increase of 1 to 2 inches per hour, the snowstorm that swept through the region dumped a cumulative total of roughly 9 inches across much of Johnson County, but some areas recorded totals topping 10 inches.

Here are some local snowfall totals as recorded by the NWS from around Johnson County:

True to early forecasts, the Kansas City metro started to see the snow wind down to a halt around 3 p.m. Thursday.

Kansas City had already received an inch of snow by 6 a.m. and saw an increase of 1-2 inches per hour through lunch time. It kept up this pace before the snow stopped around 3 p.m.

That window between 6 a.m. and noon was the heaviest window of snowfall throughout the day.

The NWS said snow was generally falling more heavily on the southern side of the metro area and into central Missouri.

A total 24-hour snowfall analysis from today will be reportable 24 hours after snow stopped falling.

Power outages due to the accumulated ice and snow did not seem to be a broadly felt issue as of Thursday evening.

KHP Troopers in Troop A are helping @KansasCityKDOT with keeping traffic back from the snow plows so they can clear the roads more efficiently!

Forecasts for Friday don’t predict anymore snow, but temperatures will stay fairly cold, with highs in the upper 30s during the day and lower 20s during the night.

Temperatures were expected to dip down to near 10 degrees overnight into Friday, potentially refreezing roads and making driving tonight and tomorrow morning potentially hazardous.

The Shawnee Mission School District  has also announced a second day of being closed due to inclement weather.

Blue Valley and USD 232 were already set to have parent-teacher conferences today and have adjusted their schedules or made those conferences remote.

Due to winter weather, Friday, Feb. 18, will be a Plan B day. This means students will not report to school. Additional information about SMSD’s weather procedures can be found at https://t.co/rcsyhEciY7. Be warm and safe! pic.twitter.com/YgihVeh2c8

As local snow crews continue plowing, residents are encouraged to stay home if possible as crews move from busier streets into residential neighborhoods.

“It’s been very helpful that many OP residents have stayed home throughout the day, giving our drivers easy access to plow City streets,” said Meg Ralph, Overland Park’s communications manager. “We ask for continued patience as we move into residential areas. Crews are working as quickly as they can to get the job done safely.”