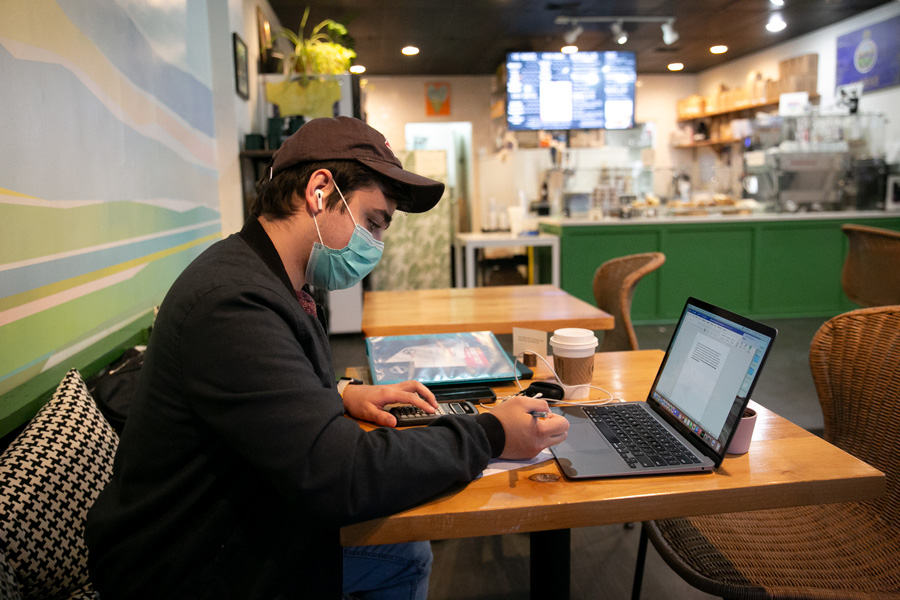 The Mission City Council has decided to let a citywide mask mandate expire next week. Above, a masked customer studies at Urban Prairie Coffee on Wednesday afternoon in downtown Mission. (Urban Prairie Coffee is only encouraging masks and not requiring them). Photo credit Leah Wankum.

The citywide mask mandate in Mission is ending next week.

After some discussion and hearing comments from a few residents, the Mission City Council on Wednesday voted 6-1 to allow an ordinance requiring face coverings in public spaces during the COVID-19 pandemic to expire on Wednesday, Feb. 23.

Mission’s mask order has been in place since Jan. 18 and ends next Wednesday.

City councils in those two cities both opted to extend their mandates through March 12.

Fairway also passed a mask ordinance in January, but decided against extending it before it expires Thursday, as well.

“That was exactly what we were hoping to see,” said City Administrator Laura Smith. “I don’t think any of us would stand here and take credit for that drop, based on actions that we’ve taken, but this is exactly the position that we wanted to be in and seeing those numbers come down as dramatically as they went up.”

The mask mandate in Mission required everyone to wear a face covering in publicly accessible spaces in the city, with certain exceptions.

Individual violators could be fined up to $25. Businesses and organizations had no obligation to enforce the mandate, leaving compliance up to individuals.

“I’m in favor of letting it expire; I think we’re in a different position than we were when we first looked at this however many weeks back,” said Councilmember Trent Boultinghouse. “Just to kind of reiterate: We’re all sick of talking about this. This has been the dominant thing on my tenure since I’ve been on the council. I’ve been proud of our response up until now. I thought we’ve always expressed pretty sound judgment but, in this case, I think it’s probably time to let it go.”

At Wednesday’s meeting, a few residents spoke against the mask mandate, citing concerns with government overreach, a potential negative impact on businesses and a lack of compliance from individuals.

These protocols, which mostly relate to the community center, could include:

A recording of the meeting is on the city’s Facebook page. Discussion begins at 1:03:23.