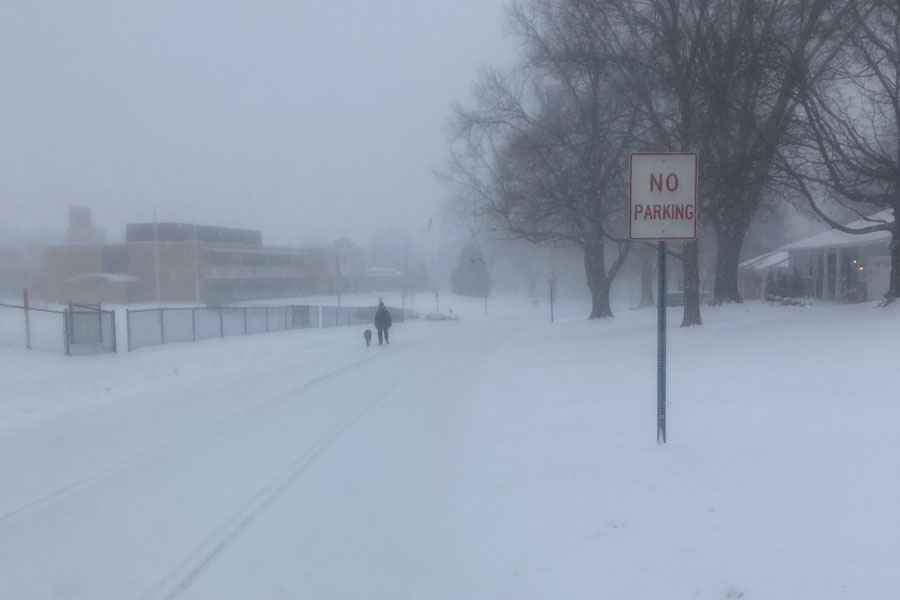 Snow blanketed the Kansas City region Thursday morning, falling at a rate of 1 to 3 inches per hour in late morning. Above, a hardy dog walker out in Fairway, near Bishop Miege High School. Photo credit Kyle Palmer.

With nearly five inches of snow this morning, the National Weather Service predicts a possible cumulative total of up to nine inches in the area by the end of today.

Kansas City International is up to 3.0"…up from 1.8" last hour…increase of over an inch the past hour.#HeavySnowfallRates#ComingDownInBuckets

According to early forecasts, the Kansas City metro should start to see the snow wind down by roughly 3 p.m. Thursday, as the storm continues to move east.

Kansas City had already received an inch of snow by 6 a.m. and saw an increase of 1-2 inches per hour through lunch time.

That window between 6 a.m. and noon was predicted to be the heaviest window of snowfall Thursday.

The NWS said snow was generally falling more heavily on the southern side of the metro area and into central Missouri.

A total 24-hour snowfall analysis from today will be reportable 24 hours after snow has stopped falling.

Temperatures were expected to dip down to near 10 degrees overnight into Friday, potentially refreezing roads and making driving on Thursday evening and Friday morning potentially hazardous.

Another band of more intense snow is moving toward the KC Metro. Visibility could be reduced at times. pic.twitter.com/NXh6IXCF02

Power outages due to the accumulated ice and snow did not seem to be a broadly felt issue as of midday Thursday.

Reported power outages to Evergy had reached less than 300 total customers by 10:47 a.m.

The Kansas Highway Patrol also reported a surge of weather-related vehicle incidents and backups throughout the area from this morning.

There are multiple slide-offs, vehicles stuck in the snow & crashes across Kansas. Road conditions are hazardous.

LT Beard is out with this semi stuck in the snow in the KC area.

Residents are encouraged to stay home and avoid travel until road conditions improve, if possible.

Roads are covered pretty much everywhere you look. Stay home if you can. We like you and want you to stay safe. pic.twitter.com/k6kqQvTGIk