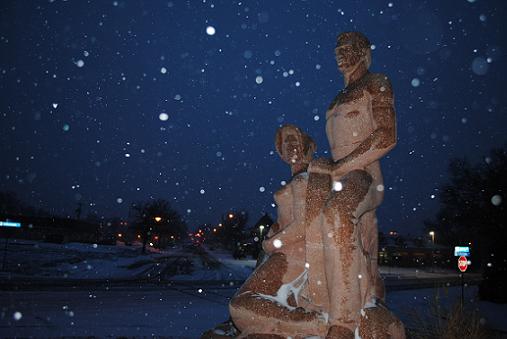 The National Weather Service says "it won't look like much has happened" when most people wake up Thursday. The heaviest snow is expected between 8 a.m. and noon Thursday. File image.

A winter storm began rolling into the Kansas City region early Thursday morning, bringing with it icy rain and snow that could impact commuters’ drives to work.

The National Weather Service’s Kansas City field office warned that more moderate to heavy snow fall is expected between 8 a.m. and noon, and road conditions could quickly deteriorate from there.

“It probably won’t look like much has happened when you wake up tomorrow. Don’t let this fool you,” the NWS tweeted Wednesday night.

Alright everyone, here is the deal. It probably won't look like much has happened when you wake up tomorrow. Don't let this fool you!

Any freezing rain/sleet makes for hazardous travel. We also expect moderate/heavy snow between 8 AM – 12 PM, so roads will become slick quickly!

Johnson County and much of the rest of the metro is still expected to get between six and eight inches of snow, according to forecasters.

A winter storm warning is in effect until 6 p.m. Thursday evening, with sleet and rain expected to fully transition to snow by 7 a.m., according to the NWS.

We will start to see the transition from rain ➡️ freezing rain/sleet ➡️ snow overnight and into tomorrow morning. Snow will gradually exit the area Thursday afternoon/evening.

Hazardous travel is expected tomorrow in KS & MO, especially in the morning. Stay home if you can. pic.twitter.com/AP7PJiJibp

The Shawnee Mission School District canceled classes Thursday due to the weather.

USD 232 in De Soto was set to have parent-teacher conferences Thursday and Friday but will now make those remote.

Blue Valley is also adjusting its parent-teacher conference formats for K-8 students and has canceled classes today for high schoolers.

Another round of snow is on its way, according to forecasters.

This time, the National Weather Service’s Kansas City field office says there could be more snow than the two to four inches that dropped in the first week in February.

The NWS has issued a winter storm warning for the Kansas City area, in effect from midnight Wednesday to 6 p.m. Thursday.

The warning says some parts of the region could get between four and six inches of snow with an additional tenth of an inch of ice.

“Travel could be very difficult. Patchy blowing snow could significantly reduce visibility,” the warning says. “The hazardous conditions could impact the morning or evening commute.”

A winter storm is expected from late Wed/overnight – much of the day Thursday. Rain/storms transition to sleet/freezing rain and eventually snow from northwest to southeast. Regardless of snow amounts dangerous travel is expected Thursday due to the mix, snow, dropping temps. pic.twitter.com/7s4l1TELtp

“The biggest difference we’re seeing is the axis of the heaviest snowfall looks to be a little further north than the previous snowfall we had,” Blair said. “What that means for portions of the Kansas City area is a little bit more snow with this event than we saw the last event.”

When will it start?

As for when it starts, rain is expected to begin falling Wednesday afternoon. That will transition to sleet and snow overnight, with the heaviest snow expected to fall Thursday morning.

Here’s a rough predicted timeline from the NWS:

Blair said NWS encourages people who are able to stay home to do just that during this round of snow.

“If you don’t have to get out, certainly stay home,” Blair said. “Once we start seeing that more moderate rate of snowfall as we get into the morning hours, that’s going to certainly make travel extremely treacherous.”

Those who still need to get out are encouraged to have some sort of winter kit on hand, and let a loved one know you’re heading out just in case, Blair said.