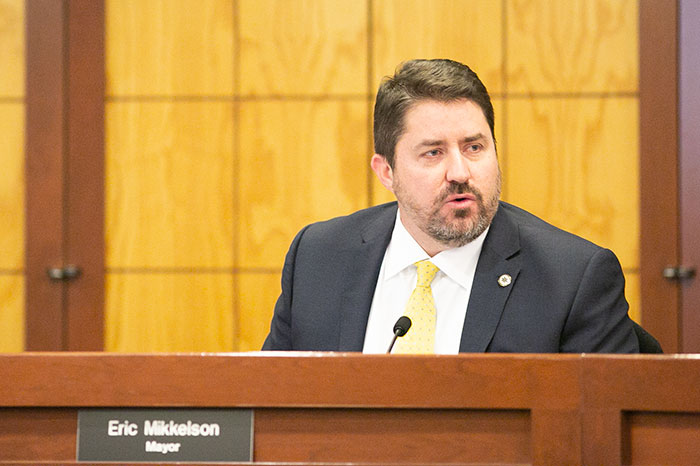 Prairie Village Mayor Eric Mikkelson filed for re-election on Tuesday morning, according to a press release. Mikkelson was first elected as Ward 3 councilmember in 2014 and then as mayor in 2018. File image (pre-pandemic.)

Mikkelson, who was first elected mayor in 2018, filed for re-election Tuesday morning, according to the Johnson County Election Office.

In a campaign press release, he said he first ran for mayor four years ago to ensure Prairie Village “remained one of the most sought-after places to live, learn, shop and do business in the region.”

While he said he’s fought hard to enhance the city during his first term — and through the COVID-19 pandemic — Mikkelson said he’s running for re-election “to finish the work [he’s] started” and keep the city “on the right path.”

“We’ve maintained what makes us exceptional, and improved in many ways,” Mikkelson said in the release. “But there’s still work to do.”

Nearly half of Mikkelson’s first term in office has been dominated by the COVID-19 pandemic, and in his campaign release, he touts the city’s response to that crisis, including providing residents and businesses with free personal protective equipment and COVID-19 test kits.

The city has also implemented mask mandates throughout the pandemic, which Mikkelson has supported.

More recently, Mikkelson backed the re-implementation of one of Johnson County’s few municipal mask orders last month amid a new wave of cases caused by the Omicron variant. The city council voted last week to extend that mandate to March 16.

In his release, Mikkelson also highlight other milestones of his tenure including the opening of Meadowbrook and Wassmer Park, the building of a new, more energy efficient public works facility and the implementation of a citywide bike-pedestrian plan.

“I’m extremely proud of the work we have done together to continue moving the city forward,” Mikkelson said in the release. “I look forward to continuing the conversation with residents about what we’ve accomplished and what work still needs to be done.”

Mikkelson, who grew up in Lawrence, was first elected to the Prairie Village City Council in 2014, representing Ward 3. He also served on the Prairie Hills Homes Association and graduated from the city’s citizen police academy.