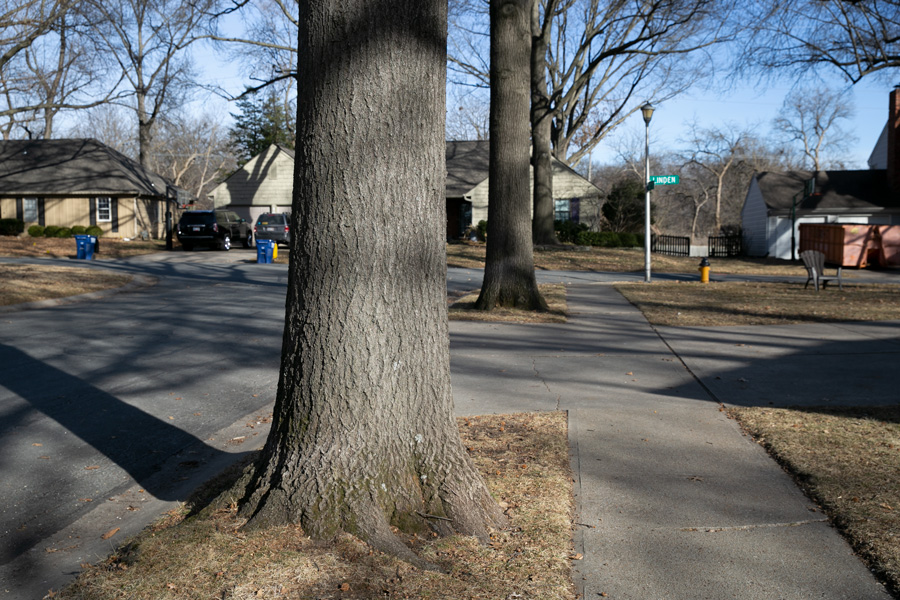 It was the trees that settled it for Julie and Kevin Morris as they were choosing between homes in northern Overland Park and the Blue Valley area thirteen years ago.

Shady streets under a canopy of big, beautiful trees.

“We didn’t want to be out in the suburbs,” regardless of how competitive the school districts are, said Julie. Instead the couple chose their Monitor Square neighborhood — just north of 103rd Street between Nall and Roe avenues — “because we liked the feel of it. And a lot of that is the trees.”

Overland Park inside the I-435 loop abounds in two things: mature trees and, according to city staff, streets that are pushing past the ends of their useful lives.

In the Morris’s neighborhood, those two things are about to collide in ways they fear will hurt the ambiance of their neighborhood.

Monitor Square and the nearby Briarford Place neighborhood just off 99th and Roe, are in line for street reconstruction next year. That means crews will remove and replace the existing streets, curbs and sidewalks.

It also means the possible removal of up to 24 trees – oak, sweet gum and maple — half of which have reached full maturity and tower over the neighborhood at heights of 60 to 80 feet, Kevin said.

Making matters worse, five large trees are slated to come down at a neighborhood gathering place.

The intersection of 102nd and Linden Street, a shady area at the top of a hill that has been a spot for chili cook-off’s, parades and impromptu whiffle-ball games, would be exposed to the sun if those trees are lost, Julie said.

So they and others in the area are on a mission to get the city to think more than twice before removing trees.

They’re asking engineers to consider preserving every tree they can by designing sidewalks that swerve around the trees’ trunks. Ideally, they’d like the engineers to use the opportunity to improve the streetscape by planting even more trees than they remove.

To that end, they’ve enlisted others in the neighborhood to contact city councilmembers, city engineers and the forester to raise their concerns.

In preserving the trees, they hope to hold on to one amenity in which north Overland Park has an advantage over the newer subdivisions to the south, Julie said.

“We’re in a split level. Those are not classically beautiful houses,” she said. “You cut all the trees down and you do not have a pretty neighborhood. The trees were a huge draw.”

Planning for the street reconstruction is still in the early stages. The utility work is slated for this fall and construction for March 2023.

Jason Hussey, project manager for the city, told Monitor Square neighbors this week in a public meeting held virtually that staff will listen to their concerns.

“The goal is to minimize the impact to the residents,” he said. But, “not removing any trees really isn’t achievable.”

Hussey said he will work with neighbors and review their concerns about individual trees. But construction crews will need to have enough room for the treads of their equipment, he said.

The removals will affect trees within 10 feet of the street. Hussey said sidewalks will be poured in their existing places, so it won’t be necessary to jog any sidewalks to avoid trees.

The main reason for most of the tree removal is because of grading changes around them, he added. Construction standards have changed over the years so new streets will mean different grades, in some cases.

In general, contractors have been good about keeping away from trees, he said.

Street construction can have a big impact on nearby trees, but a lot depends on the situation of individual plants, said Sarah Crowder, senior program manager for Bridging the Gap’s Heartland Tree Alliance, a nonprofit whose mission, in part, is to educate people about the benefits of urban tree cover.

Tree roots grow mostly near the surface and radiate beyond the canopy, she said. Road construction can damage roots that keep the tree alive and standing up. But whether it kills a tree depends on the variety and size, she said.

The city will plant a replacement for each tree removed. But the new trees will be many times smaller. Deciduous trees will be replaced with new ones whose trunks measure two to two-and-a-half inches on a caliper. Replacement conifers will be five to six feet tall.

Hussey said larger trees don’t do as well as transplants because they have to spend so much energy re-growing roots. Small trees can usually outgrow larger transplants in the same amount of time, he said.

That solution is less than ideal, Julie Morris, the Monitor Square resident, says.

So many replacements all at once will mean they’ll all mature and perhaps die close to the same time, she said.

“We’d like to spread out the impact,” she said. “You can’t really replace a 50-year-old tree.”