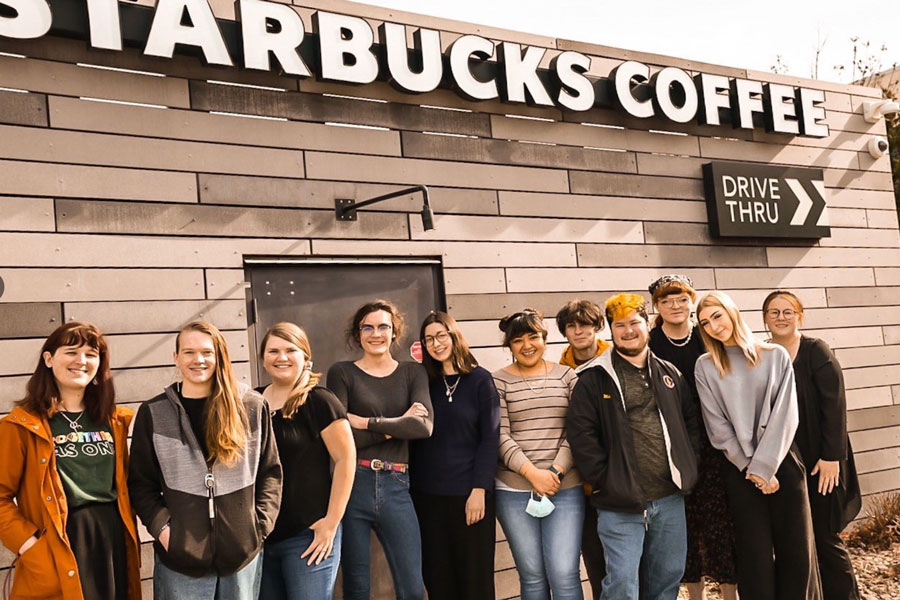 Employees at a Starbucks store in Overland Park announced plans this week to unionize, alongside a growing number of stores across the country asking for better work conditions, including the company's Country Club Plaza location. Image via SBWorkersUnited Twitter account.

Employees at a Starbucks in Overland Park have announced efforts to unionize for better working conditions, joining workers at another Kansas City-area location on the Country Club Plaza and dozens of other Starbucks franchises across the country.

Workers at the store at 10201 West 75th Street just off I-35 voiced their concerns about their store’s working conditions in a letter published Monday and addressed to Starbucks CEO Kevin Johnson.

Their concerns include safety issues on site and problems with staffing created, in part, by the company’s increased use of a mobile ordering app.

“We proudly stand in solidarity with our fellow partners here at 75th and I-35, the Country Club Plaza location and every other store choosing to organize and make their voices heard,” the letter says. “We, too, take a stand against workplace inequality, unsafe working conditions, unfair expectations, and borderline exploitation.

“If we are to believe Starbucks is as progressive as it claims, the company must give in-store partners [employees] a seat at the table.”

A Twitter account for unionizing Starbucks workers tweeted out the 75th Street workers’ letter, though the tweet appears to misidentify the exact location of the store:

In Kansas, the 79th & 136 store in Overland Park is filing for election! @CMRJB pic.twitter.com/cq2oAuT6Uv

Specific concerns the workers at the 75th Street location mention include the limited number of parking spaces reserved for employees. The letter says the store currently only has four available spots for employees and three for customers.

“As a result our cars have been damaged by partners and customers alike,” the employees say.

The store’s workers say they asked for the company to purchase a nearby row of parking spaces facing the store’s drive-thru line to reserve for staff. They also noted that the store’s district manager suggested parking two blocks away, which could force workers to navigate a busy traffic area on foot.

The workers also say they want the company to update its labor practices following increased use of Starbucks’ Order Ahead mobile app, which allows customers to reserve orders beforehand then come and pick them up.

The workers’ letter said Order Ahead orders now account for “close to half of our sales.”

As a result, workers say a district manager cut the store’s operating hours and suggested employees pick up shifts at other Starbucks locations nearby if they couldn’t work during the store’s newly reduced schedule.

The workers see a deeper problem, too, with reducing staff hours and telling workers to go to other stores.

“This change has a harder impact on partners with limited availability and LGBTQIA+ partners, the latter who are at high risk for workplace harassment,” workers wrote. “These partners feel safe at our store because half of us identify as LGBTQIA+. We feel strongly about protecting our trans and non-binary partners, many of whom joined Starbucks for the gender-affirming, life-saving surgery benefits the company offers.”

The letter says the company must prioritize giving all workers the “minimum required hours necessary to qualify for health benefits and to earn enough to cover basic needs.”

“We demand hours at our locations for our entire team,” the letter says. “To do this, mobile order must be turned of, as needed.”

One of the Starbucks workers in Overland Park told KCUR that 84% of the store’s employees have now filed union cards.

They join a growing wave of unionized workers from Starbucks locations across the country, led initially by a New York store’s employees’ decision to unionize in December.

Workers at that location echoed some of the same broader concerns over staffing and workplace safety as the workers in Overland Park and also said they deserve “financial security, seniority pay, credit card tips, functional equipment, and a company that acknowledges our contributions.”

Though Starbucks did not immediately respond to the Post’s request for comment on this story, the company has offered up the following statement to other media outlets reporting about unionization efforts in other cities:

“We are listening and learning from the partners in these stores as we always do across the country. Our position hasn’t changed: Starbucks success—past, present, and future—is built on how we partner together, always with Our Mission and Values at our core.

As Rossann Williams [a senior company executive] recently shared with our partners: ‘the vote outcomes will not change our shared purpose or how we will show up for each other. … We will keep listening, we will keep connecting and we will keep being in service of one another because that’s what we’ve always done and what it means to be a partner.'”