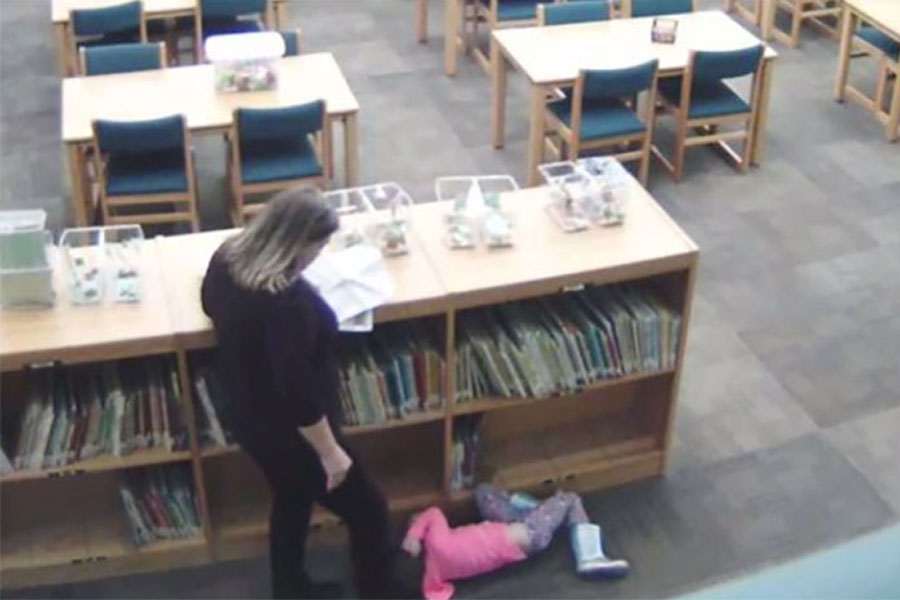 Crystal Smith, a former teacher at Bluejacket-Flint Elementary in the Shawnee Mission School District, pleaded guilty to a misdemeanor charge for kicking a kindergarten student in 2019, as seen in security camera footage above. Lawyers representing the student's family have now proposed a settlement agreement with Smith in a civil lawsuit in federal court. File image.

Lawyers for the family of a child who was kicked by a former Shawnee Mission teacher inside Bluejacket-Flint Elementary’s library in 2019 say they have reached a settlement agreement in a civil lawsuit in federal court.

Why it matters: The settlement could be the final chapter in the legal proceedings against Crystal Smith, who pleaded guilty in Johnson County District Court to a misdemeanor charge of battery for kicking the student and served one year of probation.

She was also fired from SMSD two months after the incident after the district initially placed her on leave.

The student’s family has claimed, in part, that the district was negligent in hiring Smith for the 2018-19 school year and that SMSD “failed to adequately train employees on the proper handling of events that require de-escalation.”

The incident: In February, 2019, Smith was seen in security camera footage from Bluejacket-Flint’s library kicking one of her kindergarten students as the student huddled near a bookshelf.

The student has been unnamed in the legal proceedings, only referred to by her initials “H.C.”

The student, who was five years old at the time, refused to join her classmates in line and crawled into a low library bookshelf.

After the rest of the class left the library, Smith walked over to the student, reached down and pulled the student from out of the low shelf.

The student had lain on the floor and Smith kicked the student on her back near her shoulder once.

Settlement details: On Friday, Jan. 21, attorneys for “H.C.” and her mother filed a “joint motion for approval of minor settlement.”

The motion states that H.C.’s mother alleges that the student sustained “physical and emotional distress” from the incident, claims which the motion notes, Smith denied.

Still, the motion says, “Plaintiff is convinced and believes that the proposed Settlement Agreement is fair and reasonable and in the best interests of minor H.C. and is a fair and reasonable settlement of Plaintiff’s claims against Smith considering the circumstances.”

The settlement amount is not disclosed in the motion, and the motion says the agreement contains a confidentiality clause.

Daniel Zmijewski, a lawyer representing the family in the civil lawsuit, said he is unable to provide additional details since the agreement is confidential.

Student’s status: Zmijewski did say that the student H.C. “continues to struggle with what occurred to her and seeks care to address and process her concerns.”

The student later transferred to a different school, Zmijewski previously told the Post.

Zmijewski said the claims against Shawnee Mission continue and are pending in the U.S. District Court for the District of Kansas.

Key quote: “The family was concerned with this never happening to another child in the same manner and through all their efforts it appears this may be the possible solution,” Zmijewski said.

Read the full settlement motion below: