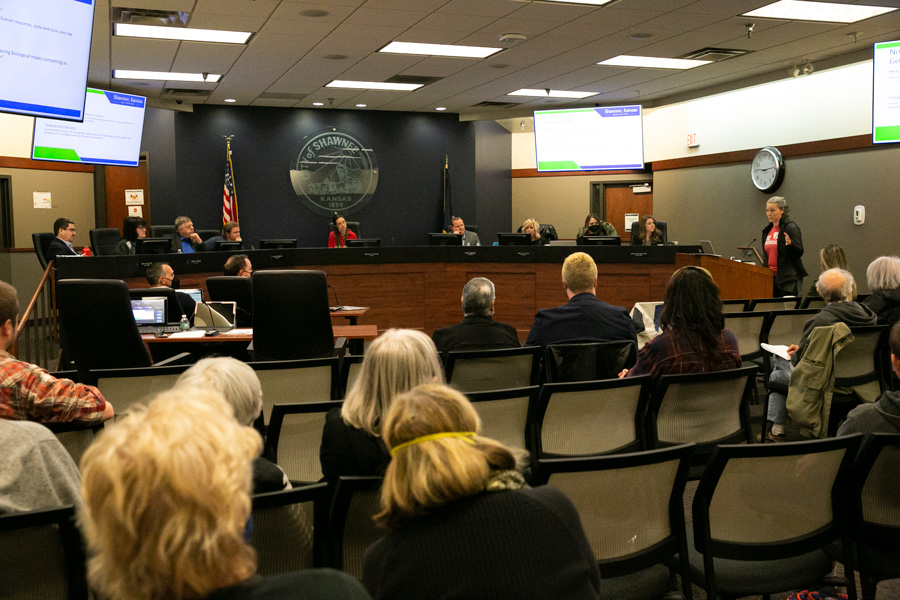 The Shawnee City Council has taken up socio-political issues related to the Fair Housing Act, partisan elections, medical marijuana and transgender sports as part of the city's new legislative agenda.

The Shawnee City Council, which includes several newly elected conservative members, has identified its priorities for the city’s federal and state legislative platform, including items pertaining to hot-button issues like medical marijuana and transgender athletes participating in women’s sports.

The items debated at Monday’s meeting essentially serve as the city’s public stance on these items that could arise at either the federal or state level and give city staff guidance on how to articulate the city’s position if they are debated in Topeka or Washington, D.C.

All the items discussed Monday came from requests by councilmembers Tony Gillette and Tammy Thomas.

The council ultimately approved four items for its legislative platform:

Should any of these items come up in the current federal and/or state legislative sessions, these documents serve as a guidepost for directing city staff per the direction of the city council.

The city council led extensive discussions over each of these four items. Below is a recording of the meeting. Time stamps are included under each section. The entire discussion begins at 1:37:10.

Statement in Shawnee’s state legislative staff direction documents: “A bill to protect the fairness of women’s sports; we believe that all should have equal opportunities in sports but allowing biological males to compete in women’s only divisions is robbing girls of their opportunities at all levels.”

Why it matters: Councilmember Tammy Thomas said she opposes allowing “biological males” to compete in sports, saying that she believes it’s unfair for “biological females.”

She said this was not a social issue meant to discriminate against transgender athletes but instead was about fairness toward “biological girls and women” because men are generally stronger and faster than women.

Transgender athletes face bans in girls’ sports in at least 10 states, according to The New York Times.

City councilmembers during a recent council retreat said they wanted to avoid bringing social issues such as this one forward at the city level. However, now that a councilmember brought it forward, they would go ahead and support it.

Some councilmembers said “the door was opened” three years ago when a previous city council approved a nondiscrimination ordinance. That city law created protections for LGBTQ residents in employment and public accommodations, as well as in personnel issues at city hall.

How everyone voted: The city council voted 7-1 to approve adding the statement showing the city’s opposition toward transgender sports. Councilmember Jill Chalfie voted in dissent.

Key quote in favor: “Now that I’m newly elected, [it’s] something much of my constituents care very much about, that those values do not represent their true, heartfelt values in their homes and how they’re raising their families. They came with that, three years ago, and presented, and felt very much unheard.” — Councilmember Jacklynn Walters

Key quote in opposition: “Does it belong on a city’s legislative agenda? And that’s the angle I’m looking at in that. I think the benefits of including it at a city level are miniscule compared to the potential unintended consequences of making a statement like this. We have invested, with JCPRD, $45-50 million… in our Valley of Champions. We have continually said that we want to be the destination for local youth sports, adult sports; we want to be the hub of this awesome area of recreation that we have in Shawnee…. What I think has a greater chance of happening is for that national tournament to look at Shawnee and say, ‘We’re not going there.’” — Councilmember Jill Chalfie

Public comment: At least four residents spoke against inclusion of the statement, saying that the issue belongs at the state level and should not be taken up by the city.

“I would love to see this community focus its efforts on other things rather than directing our efforts in Topeka on partisan topics that I feel don’t work on issues that this city specifically faces,” said Shawnee resident Jae Moyer, who said he identifies as non-binary and represents the Kansas City chapter of Equality Kansas. “I’m afraid of the precedent that this city would set if they included this specific issue.”

Statement in Shawnee’s state legislative staff direction documents: “If the State legalizes medical marijuana, the City requests consideration of the impacts on local governments including, but not limited to the impact on law enforcement and human resources, state and local sales tax, levying of excise fees, and zoning and permitting. The City of Shawnee does not support legalization of recreational marijuana.”

Other city leaders expressed hesitation for regulating medicinal drugs at the city level, noting that it should remain a consideration at the state level.

How everyone voted: The city council unanimously approved adding the statement, citing the focus of the statement on the local impacts to legalized medical marijuana.

Key quote in support: “I… want to change my wording in support of a narrow gate. I too know some people that have gained some benefit from medical marijauana… I don’t want to overlook that, that’s very important. But I also see within folks that I know well that it can become so recreational, and it can be destructive.” — Councilmember Tammy Thomas

Key quote in opposition toward a city: “…Frankly, I think I am in favor of it, all you have to do is watch the show which I would highly recommend, Dopesick, and you see the incredible problem of opiate and narcotic epidemic that we have, so frankly, I’m not sure that medicinal marijuana is not a better choice, given the incredible negative effects of the opiate epidemic.” — Councilmember Kurt Knappen

Public comment: Multiple residents cautioned against the city’s stance to oppose medical marijuana, including Rep. Susan Ruiz, who said it should remain a state-level issue.

“Outwardly saying no to medical and recreational marijuana is the same thing as saying, ‘Don’t come to Shawnee, because we don’t want to take advantage of the economic growth that comes with legalization,’” Ruiz said. “There are some economic advantages of being able to legalize it, so I would ask that Shawnee not be in the dark with this.” 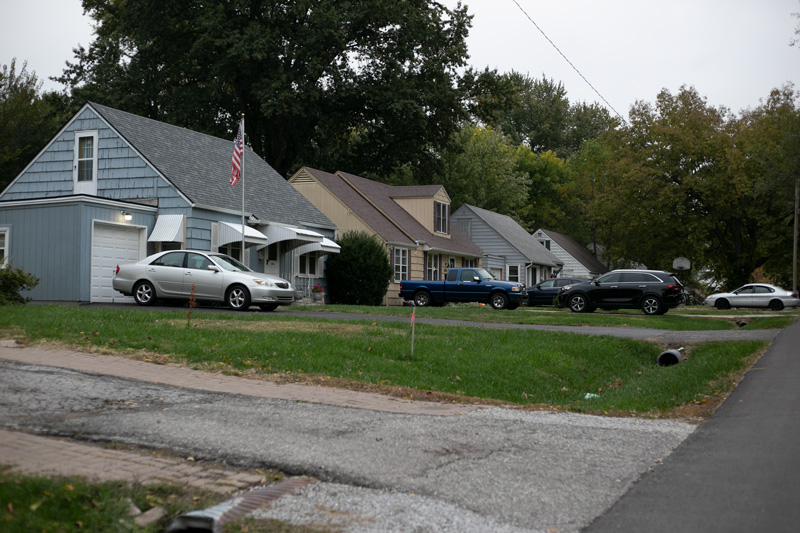 Statement in Shawnee’s federal and state legislative staff direction documents: “A deep dive into a reform process on the Fair Housing Act’s Zoning Ordinance is needed. 42 USC – 3617 need strengthening, at both the Federal and State levels, in favor of Class 1 cities ability to use Zoning laws in its favor of suburban home dwellers. The code states: ‘Fundamentally alter the essential nature of the locality’s zoning scheme.’ need to be tweaked in favor of restoring local zoning ordinances that protect Class 1 City homeowners and their property values interests. All this can be done without infringing on the right of the disabled. The rights of Single Family Residential zoning should equally be protected. It’s why local government should exist, to protect the rights of their property homeowners.”

Why it matters: Councilmember Tony Gillette wants to change the Fair Housing Act in order to, as he puts it, strengthen the city’s ability to use zoning laws that support homeowners and preserve single-family neighborhoods.

Gillette later told the Post he wants to ensure the city’s zoning laws protect single-family homeowners from corporations and outside interests that buy up houses in their neighborhoods and convert them into “group home pluses” which, by federal law, allow up to 12 people to reside in one home.

Gillette said he thinks this can be done without infringing on the rights of disabled residents who may live in group homes.

Controversy surrounding a new group home in the McAnany Estates neighborhood spurred Gillette to request that this item be added to the city’s legislative platform, he told the Post.

How everyone voted: The city council voted 7-1 to add this item. Councilmember Jill Chalfie voted in dissent, citing her belief that the city should protect the interests of all residents, not just homeowners.

Key quote in favor: “Because the fact that they have protection from the federal government, they literally usurp local zoning requirements… We don’t want them to come in and supersede our zoning… This is specifically about protecting people’s property values, because I tell you, those folks over at McAnany Estates really got the short end of the stick when a group home comes in there and right smack dab between a couple homes and they establish a group home right there. That’s a real problem.” — Councilmember Eric Jenkins

Key quote in opposition: “I do want to be careful that we’re looking at real issues and not the perceived issues. We need to legitimately make sure that people are keeping their homes up to code and that they’re not being unneighborly. I think a lot of that, we have covered with our current laws.” — Mayor Michelle Distler

Public comment: One Shawnee resident, Andy Bonge, said she was against efforts by the city to oppose the Fair Housing Act. “Because when we do that, we say to our community that not everyone’s presence may be welcome within our neighborhoods, and that active discrimination is tolerated,” Bonge said. 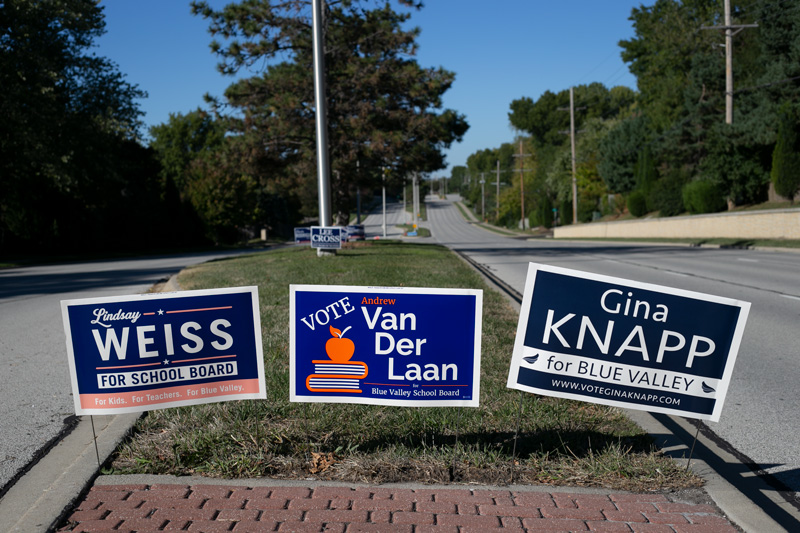 Why it matters: Councilmember Gillette proposed the city remove a reference in the city’s legislative platform that states Shawnee’s support for nonpartisan municipal elections.

The city has historically offered public support for nonpartisan municipal elections in its legislative platforms, according to city staff.

The city council’s move away from public support for nonpartisan elections sheds light on the political climate in Shawnee and across the country.

On Monday, some councilmembers spoke of going door to door during recent elections being asked by voters if they are a Democrat or Republican.

A majority wanted the legislative platform to acknowledge the dynamics of campaigning for office and the transparency behind openly campaigning when endorsed or financially supported by either major political party.

How everyone voted: The city council voted 7-1 to remove the statement showing the city’s support for nonpartisan elections. Councilmember Jill Chalfie voted in dissent, citing her wish for the city to remain a neutral ground that serves all residents, no matter their politics.

Key quote in favor: “You call this nonpartisan; it’s partisan as can be… Let’s be honest, let’s quit trying to pretend something’s going on that ain’t going on. The bottom line is people want to know why you’re a Republican or whether you’re a Democrat, they want to know for one reason: Because they associate a certain kind of… philosophy that’s associated with that particular party, or a certain stance that may come out politically if you’re a member of that party.” —  Councilmember Eric Jenkins

Public comment: Five residents spoke against the removal of the statement because they believe partisan elections are divisive at the city level.

“We are called to investigate the issues, to look at the candidates and what they’re standing for, and not dependent upon what either party tells us to do,” said Shawnee resident Diane Kuhn. “I would also remind you that in recent election for Johnson County commissioners that the whole county voted to keep nonpartisan elections, so I would hope that in the city, we also would keep nonpartisan elections.”