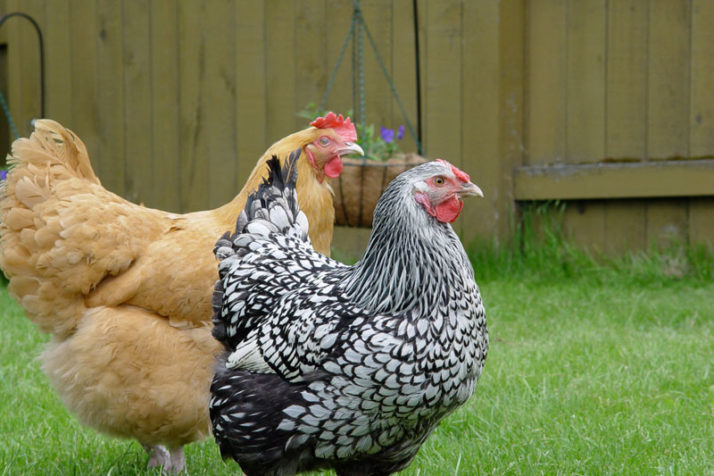 The Overland Park City Council on Monday gave the final okay to a two-year pilot program that streamlines a process for residents to apply to keep chickens. The ordinance still requires residents live on at least a quarter acre in order to keep chickens. Image used under a Creative Commons license.

Backyard chickens finally can become a reality for Overland Park homeowners, as long as their properties are at least a quarter acre.

In the culmination of months of fine-tuning, councilmembers gave the final okay Monday to a two-year pilot program that will do away with a time-consuming process residents have for years undergone in order to keep chickens on their property.

“I have heard from numerous residents in my ward and in other parts of the city that they’re very interested in urban agriculture and setting up backyard hens. I think this is a good compromise to get us started,” said Councilmember Logan Heley.

The previous ordinance allowed chickens by right on property over three acres. Residents with smaller plots had to apply for a special permit through the planning department.

That involved hearings before the planning commission, neighbor outreach, and then another presentation to the full city council.

The process took staff time and was frustrating because after all that, previous councils routinely turned down applicants on smaller lots.

The pilot program should streamline things and save taxpayer dollars, Heley said. He said over the years, the council “has spent far more hours on chicken issues than the public would like us to.”

Under the newly approved chicken ordinance, applicants will still have to get a one-year chicken permit, but that will be handled through the city clerk’s office with no council or commission presentations required.

There will still be inspections, which will be conducted by the city’s animal control departmennt, as well as rules about setbacks and sanitation.

The number of chickens will be linked to the size of the property and no roosters will be allowed.

Homeowners associations also retain the power to ban chickens within their own territories.

Some councilmembers remained unconvinced that chicken keeping is a good thing for an urban area.

Councilmember Paul Lyons, who has consistently voted against backyard chicken special permits, said he fears the birds will attract rodents and predators. He also noted the new regulation will not require chicken owners to get buy-in from all their neighbors, as it did before.

Councilmember Jim Kite also voted against chicken permits in the past but said he could support it as a temporary experiment because of its safeguards.

“I think I’m willing to give it a shot after several years of voting against chickens in the city,” he said, “but I am going to be in big trouble when I get home.”

Councilmember Fred Spears also remained skeptical, but voted for the ordinance because it is temporary. Spears said he was concerned the new ordinance might prove a slippery slope.

“When I’ve talked to people over the last year about this, I got two responses. One was, ‘Oh boy. I can have a pig or a goat,’” he said. “Or I got, ‘Oh no. My neighbors are now going to have pigs or goats.’”

The ordinance approved Monday did not address goats or pigs.

Councilmember Faris Farassati suggested the city distribute information on sanitary best practices for keeping chickens, but noted there isn’t strong evidence to deny chickens on the basis of health threats.

The motion passed 10-1 with Lyons voting against it. Councilmember Holly Grummert was absent.

Read the entire ordinance below: