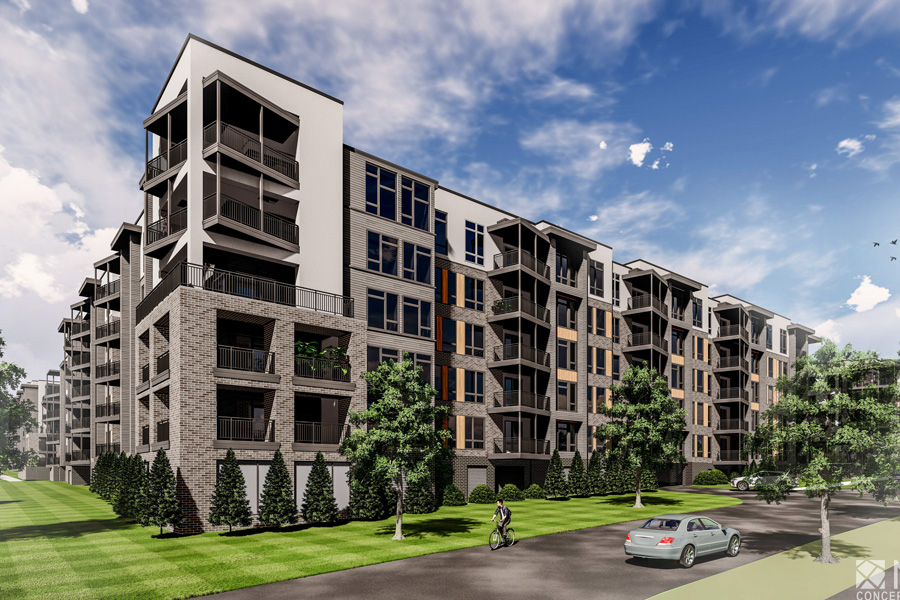 Olathe-based West Star Development is moving forward with a revised preliminary plan for Vista Village, a mixed-use project located near Lenexa's future justice center site near Prairie Star Parkway and Ridgeview Road. Above, a design rendering of the project.

After some discussion, the Lenexa City Council on Tuesday voted 7-0 to approve a revised preliminary plan for the 46-acre development, which consists of seven retail buildings, a 207-unit condominium building and 119 townhomes, as well as an amphitheater. Councilmember Tom Nolte was absent.

The project site is located in an area of high growth as the city develops westward, with the completion of Ridgeview Road, plans for a new justice center to be built just to the east, and new residential neighborhoods built in recent years.

Leading the development is Prairie Ridge LLC, a company headed up by Olathe-based West Star Development.

Mayor Mike Boehm and councilmembers shared overall support for the project as well as for the developer, although the mayor expressed some hesitation over the concentration of high-end housing and plans to build the residential portion in an area that marks one of the last undeveloped sites in the city that has previously been dedicated for office or commercial uses.

In particular, Boehm worried that some of the apartment units built as part of the project could be out of price range for many residents and thereby fail to fulfill a need for more attainable housing.

Project representatives said Tuesday that potential price points for the project have yet to be determined.

“I just don’t want to see this turn into a lot of apartments, maybe a little retail, and a bunch of townhomes nearby,” Boehm said. “Again, I’m not encouraging [a] ‘no’ [vote], but if we’re not getting attainable/affordable, it’s just more high-end, which, of course, the people to the north are going to love, but that also means more neighbors that are going to… protect what’s in their backyard, which puts us in a tough spot if we haven’t thought of this moving forward.”

A few city leaders said they hope this project could fulfill some of the multi-family housing demands in the city. Some also showed interest in seeing that the condos become owner-occupied.

“I’m really pleased — just last week, we had a conversation about affordable housing and different things — this to me feels like it’s right in line with some of the things we heard last week,” said Councilmember Dan Roh.

City staff have stipulated that the developer must complete the project in certain phases, including a corner plaza in conjunction with the corner retail building, and an amphitheater with the condominiums.