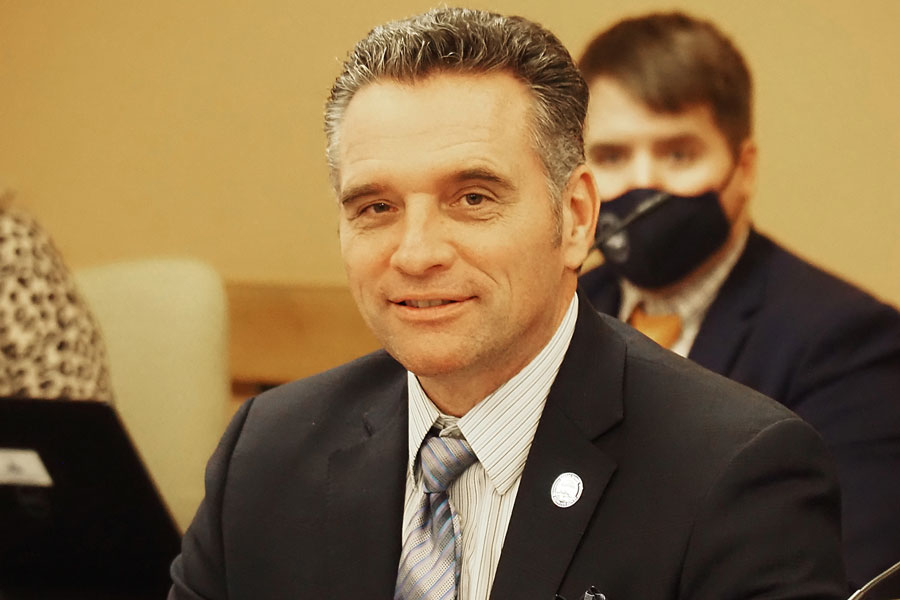 Senate President Ty Masterson introduces a proposed new map for congressional districts during a redistricting meeting Tuesday in the Statehouse in Topeka. He says the four U.S. representatives would retain their seats in the new boundaries based on 2020 election results. Photo credit Sherman Smith/Kansas Reflector.

By Tim Carpenter and Sherman Smith

Republicans in the Kansas Senate and House unveiled a new congressional map Tuesday that would slice the Kansas City metro area in half and move Lawrence into the deeply conservative district that stretches to the Colorado border.

Masterson said Davids and the three Republicans who represent Kansas in Congress would all retain their seats in the new districts, based on 2020 election results.

He rejected the assertion that splitting Wyandotte County — with the southern part remaining in Davids’ 3rd District and the northern part joining Topeka and rural areas of the eastern third of the state in the 2nd District — will result in a court battle.

“No matter what map we draw, how you draw it, there’s gonna be some interest group not happy, and there’ll probably be litigation that has zero effect on that,” Masterson said.

Senate Minority Leader Dinah Sykes, D-Lenexa, said Republicans ignored the feedback given to lawmakers during town halls last year when residents asked them to keep the greater Kansas City metro area in the same district. She said the map won’t “pass muster” because of the way it divides minority groups.

The revised 2nd District looks like “a salamander,” she said.

“I would expect it to be challenged,” Sykes said. “It looks like it has been gerrymandered.”

The House and Senate redistricting committees both plan to take action on Thursday to choose a map.

Kansas Republicans have made no secret of a desire to undermine re-election prospects of Davids, a Democrat serving the 3rd District in Wyandotte and Johnson counties, and to reinforce the campaign of GOP challenger Amanda Adkins.

At the same time, Republicans don’t want to meaningfully influence the re-election challenges faced by U.S. Reps. Tracey Mann of the 1st District, Jake LaTurner of the 2nd District and Ron Estes of the 4th District.

Democrats, while a minority party in the House and Senate, want to do the opposite. Gov. Laura Kelly, a Democrat, has veto authority over maps adopted by the Legislature for the U.S. House, Kansas House, Kansas Senate and Kansas State Board of Education.

The GOP-led House and Senate could override a veto by the governor.

State Rep. Chris Croft, an Overland Park Republican and chairman of the House Redistricting Committee, said the Ad Astra proposal would leave the state with four districts with exactly the same populations — 734,470 — based on the 2020 Census.

“What I really like about what you got today is there’s a big variety out there for us to really dig into and see what the best options are for the state,” Croft said.

In 2012, the Legislature failed to complete the mapping project. The job was assumed by federal judges who quickly compiled the maps relied upon in elections for the past decade. The new set would control boundaries through 2032, and must reflect the dramatic population growth in Johnson County and loss of residents in dozens of rural counties.

State Rep. Tom Burroughs, a Democrat from Kansas City, Kansas, introduced a map that would leave Wyandotte and Johnson counties united in the 3rd District. The 2nd District would become concentrated in northeast Kansas in his “Buffalo 2” map, while the 1st District would reach into southeast Kansas.

He said the Legislature should produce maps that kept together so-called communities of interest, such as urban residents in Wyandotte County and rural Kansans in rural communities.

“Those concerns have been expressed to us in thousands of pages of testimony,” Burroughs said. “The advantage of my map is that it meets the population variances and it keeps the metropolitan Wyandotte-Johnson counties together.”

A map, which was formally introduced by Croft and Sykes, was developed by the Kansas League of Women Voters and was consistent with the map proposed by Burroughs.

Another map was introduced by state Rep. Kyle Hoffman, R-Coldwater, that was a slight modification of the congressional map approved by the Kansas House in 2012. It was never implemented, but it would have placed Wyandotte County inside the mostly agrarian 1st District.

Hoffman said he voted for that map a decade ago, but wasn’t certain he would still hold to that perspective. He said the previous incarnation was made available for comparison’s sake as the Legislature went through the process of compiling updated maps.