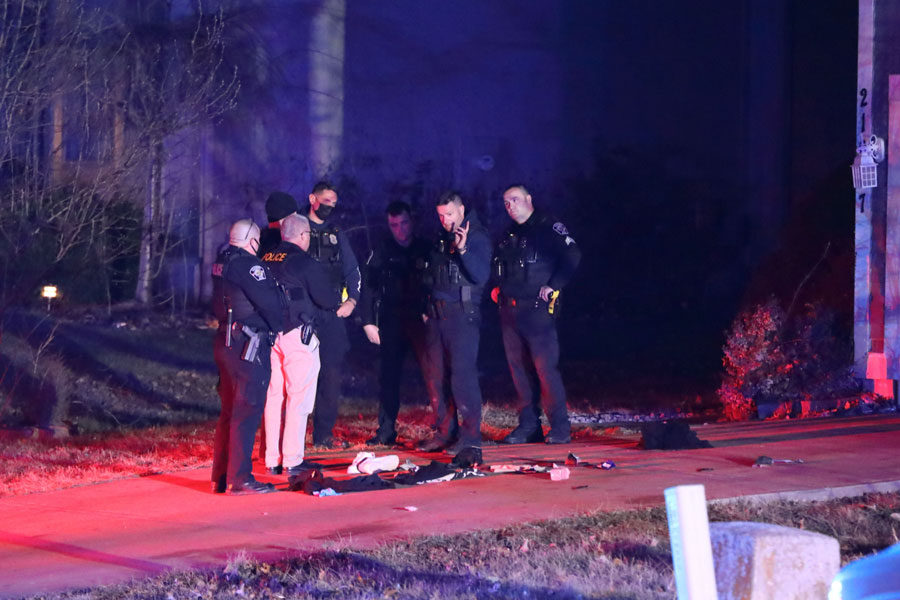 Shawnee Police officers, including a detective, confer in the driveway of the home late Thursday night, just after the victims had been loaded into ambulances to be transported to Overland Park Regional Medical Center. Police say one victim is in critical condition, the other in stable condition. Police are searching for two suspects who left in what was described as a white car. Photo credit Mike Frizzell.

Shawnee Police say a man has been arrested and is being held on a charge of attempted first degree murder in connection to a shooting Thursday night at a home in western Shawnee.

In a statement, Shawnee Police Maj. Jim Baker said an 18-year-old victim has now been released from the hospital and a 17-year-old who was also shot has been upgraded from critical to stable condition.

Baker says the victims were allegedly shot during a dispute with two male acquaintances.

Police have not said if the shooting occurred inside or outside the house.

Johnson County Med-Act ambulances transported both shooting victims to the Overland Park Regional Medical Center. According to Med-Act, one was in critical condition and the other was in stable condition.

The suspects are only described as a white male and a black male, both in their late teens or early 20s.

Major Baker says both suspects fled in a white car, possibly a Ford Focus. The wheels appeared to have been either painted black or missing all four hubcaps.

The address of Thursday’s shooting is the same one that police served a search warrant at in March of 2021. Neighbors say the house is often the subject of police attention.